The elderly and women are struggling to find employment 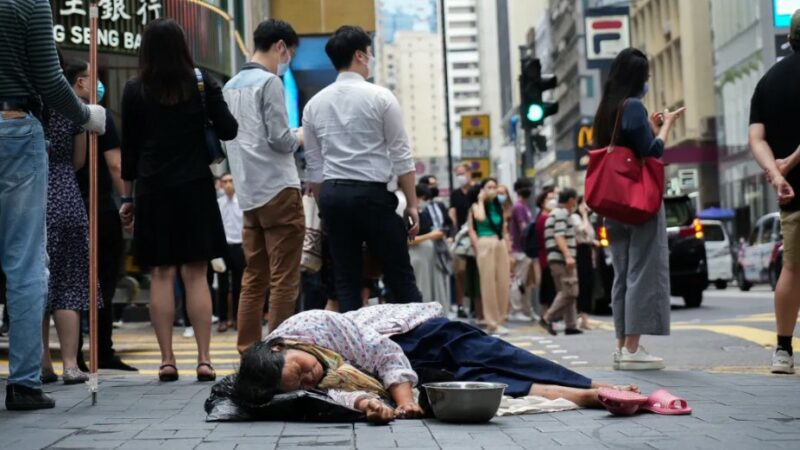 This post was written by Lea Mok and published in Hong Kong Free Press on 6 October 2022. The following version is published on Global Voices under a content partnership agreement.

The pandemic has exacerbated Hong Kong’s wealth gap, with the city’s poorest making 47 times less than its richest residents, Oxfam Hong Kong has said. In the pre-COVID-19 era, the highest earners made 34.3 times more.

“The wealth gap of Hong Kong has reached the tipping point,” Oxfam’s director general Kalina Tsang said on October 6, 2022. She added that the relaxation of travel restrictions and social distancing measures have not yet had a positive economic impact on those who earn the least.

Oxfam’s latest report on poverty and employment during the pandemic was based on an analysis of statistics from the Census and Statistics Department from 2019 to the first quarter of 2022. Oxfam’s assistant research and advocacy manager, Terry Leung, highlighted the organization's findings:

The Census and Statistics Department last month said that unemployment had fallen from 4.3 percent in May to July to 4.1 percent in June to August, with the number of unemployed Hongkongers declining by around 6,300.

However, Leung said that the unemployment rate and the underemployment rate of people in poverty were eight times and four times higher than other income groups, respectively, with the elderly and women struggling to find employment.

Among those who were unemployed and aged at least 65 — the age of retirement in Hong Kong — every second person was living below the poverty line, according to Oxfam’s figures.

Carers of elderly residents in around 70,000 households were also older adults, which Leung said was a result of the lengthy waiting time — 42 months on average — for care facilities.

He also said that COVID outbreaks had resulted in the suspension of classes in schools and kindergartens, making it difficult for women, often the primary caregivers of children, to join the labour force. Child care services in most areas were also insufficient, Leung said.

Even after the government relaxed its hotel quarantine requirement for incoming travellers and some social distancing measures, Wong Shek-hung, director of the Hong Kong, Macau, and Taiwan programme, said she thought low-income families would need additional time to recover from the financial impact of COVID-19.

Hongkongers may travel more and spend money overseas in the future. It may also make it more difficult for the local catering industry to recover economically.

Oxfam urged the government to raise the city’s minimum wage to HKD 45.5 (USD 5.8) per hour to alleviate the economic struggles of the poorest households in Hong Kong. The current minimum wage is HKD 37.5 (USD 4.78). Wong stressed:

The organisation also suggested that the Temporary Unemployment Relief Scheme — which granted a one-off subsidy of HKD 10,000 (USD 1,274) to eligible unemployed individuals — should be extended until the end of 2022, and the subsidies for employers to hire staff aged 40 or higher should be increased.