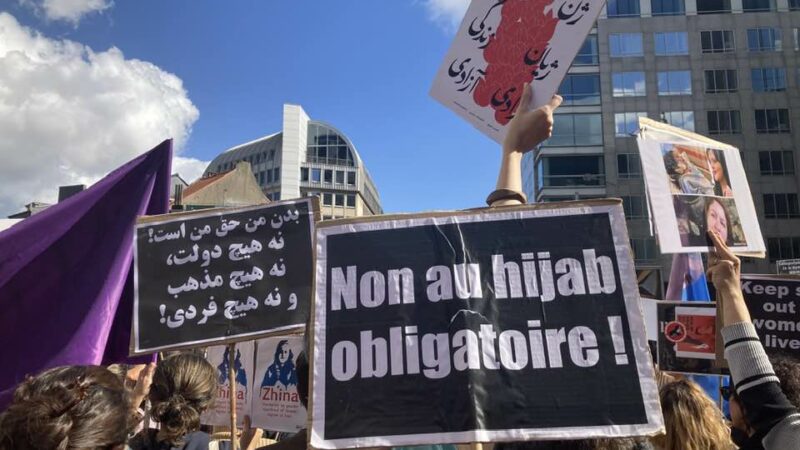 As the protest movement in Iran continues for the third week in a row, rallies in solidarity with the Iranian people’s struggle for freedom and justice were held in more than 150 cities worldwide, on Saturday, October 1.

“Woman, Life, Freedom,” “Mahsa Amini,” “Down with the dictator,” and “We do not want the Islamic Republic,” were among the slogans chanted around the world and in Iran.

According to Mahmood Amiry-Moghaddam, co-founder and spokesperson for the Norway-based NGO Iran Human Rights (IHR), through protest, Iranians living abroad can shape public opinion about the situation in Iran and pressure their governments to support the Iranian people.

The rallies are drawing huge turnouts around the world. Supporters all the way from Toronto to Tokyo gathered for the Freedom Rally for Iran on Saturday.

Finally, Iran's supreme leader, Ali Khamenei, broke his silence on Monday, condemning “rioting” and accusing the US and Israel of orchestrating the demonstrations.

Today, Iranian diaspora across the world are taking into the streets to protest Islamic Republic regime and chant anti-regime slogans. This is Japan's Tokyo where Iranians chant “Khamenei, We Will Overthrow You!”#Iran #MahsaAmini #مهسا_امینی #IranRevolution #IranProtests2022 pic.twitter.com/3WyI4K8Cmk

The original protests in Iran were triggered after Mahsa (Zhina) Amini, 22, died while being detained by the country's morality police for allegedly violating the hijab rules on September 16, as parts of her hair were visible under her hijab. All women must cover their hair in Iran or risk being arrested by the morality police.

Her death was a watershed point in the Iranian protest movement for freedom, the abolition of the compulsory headscarf, and the end of dictatorship. Women have played a particularly important role in this movement, protesting tyranny by removing their headscarves and burning them in public, leading rallies in Iran and around the world while also bearing the brunt of police reprisal.

Minou Majidi was killed by regime forces during recent protests . Now, her daughter has cut her hair, standing near her mom's grave !
(Woman,life,freedom)#مهسا_امینی #مینو_مجیدی #Mahsa_Amini pic.twitter.com/ae8zBFL9UR

“We don’t want Islamic Republic”: young woman chants in Tehran, accentuating the chant by punching the air with a fist holding her hijab. #MahsaAmini #مهسا_امینی pic.twitter.com/IbKLq9z1jS

Despite intense persecution and crackdowns, Iranians continue to march in the streets and on university campuses. According to Iran Human Rights, at least 92 people were killed by Iranian police during the protest movement, and another 41 were killed in clashes on September 30th in Zahedan, in the southeastern province of Sistan-Baluchistan, to protest the rape of a Baluch 15-year-old girl, bringing the total number of dead people to at least 133 as of October 2, 2022. For decades, Baloch minorities have faced harsh discrimination, persecution and tyranny.

Amiry-Moghaddam said in an interview with Global Voices:

The killing of protesters in Iran, especially in Zahedan, amounts to crimes against humanity. The international community has a duty to investigate this crime and prevent further crimes from being committed by the Islamic Republic.

Protest and resistance in Iran

Many artists inside and outside the country have expressed their support and even created artwork honoring the Iranian people. Iran-based Shervin Hajipour,  a singer and songwriter, wrote a hit calling song “Baraye,” meaning “For” in Persian, using tweets from other Iranians criticizing the state violence. He then posted the song on his social media. The song went viral and resonated with over 40 million people in 48 hours. Iran’s police forces raided his home on September 29 and arrested him. He was released today on bail, so that his case can go through the legal process.

In the meantime, Iran's repressive machine has failed to curb Iranian protesters. More cities and universities became scenes of resistance and clashes on Sunday, October 2, especially Sharif university in Tehran. After a video emerged of a large number of students at Sharif university seemingly trapped in the campus car park, herded together by security forces, people from around Tehran came to the university to support trapped students and join the protest.

The Khomeini regime is after a great massacre at Sharif_University. In Tehran, the people gathered in front of #SharifUniversity , chanting “Death to the dictator” and demanding the release of the students.#MahsaAminii#مهسا_امینی#IranProtests2022 pic.twitter.com/xmQpFOkXmB

Isfahan University students push the gate and break out of the university as they chant “Dead to the dictator”. #IranProtests#مهسا_امینی#MahsaAmini#IranRevolution#OpIran pic.twitter.com/17aRlppr8B

🎞️ Schoolgirls continue to strike alongside many university students across #Iran despite the government's severe repression. In this video, schoolgirls in #Karaj chant: “Mullahs, get lost!”⁰⁰#IranProtests2022 #Mahsa_Amini #MahsaAmini pic.twitter.com/fMJL2aJL5H