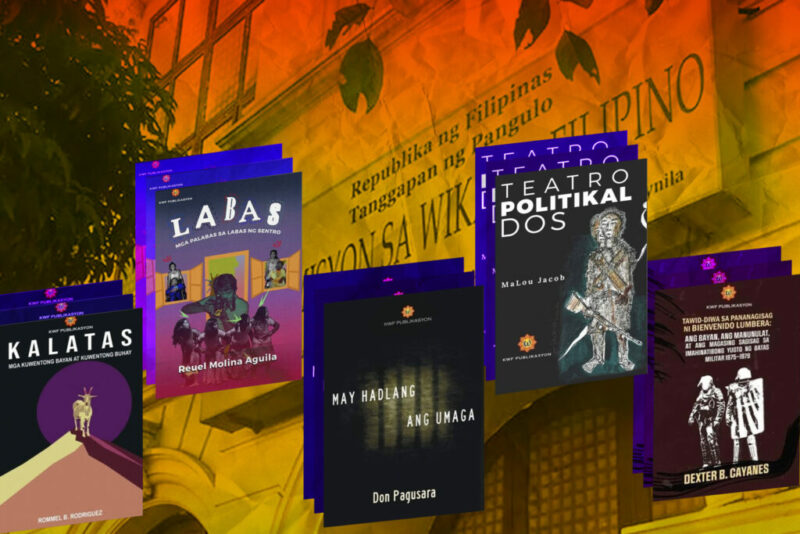 The five books tagged as ‘subversive’ by some commissioners of the Komisyon sa Wikang Filipino (Commission on Filipino Languages). Photo from Center for Media Freedom and Responsibility.

A government order stopping the publication and distribution of five books dubbed by Philippine authorities as “subversive” has been rescinded after a strong pushback by the Filipino literary and academic community against book censorship and repression.

The Komisyon sa Wikang Filipino [Commission on Filipino Languages] or KWF, a government agency under the Office of the President charged with promoting, preserving, and developing  the country’s languages, withdrew its earlier order after sustained protests by the country’s leading academics and writers.

The Commission ordered the banning of the following titles in Memorandum 2022-0663 on August 9, after a talk show in far-right mouthpiece Sonshine Media Network International (SMNI) accused the books of “subversion” and red-tagged the authors as “communists”:

Red-tagging is a term used in the Philippines referring to the practice of branding individuals as terrorists or communist rebels “without substantial proof of any unlawful conduct.”

As the country commemorates Buwan ng Wika, the Komisyon sa Wikang Filipino has issued a memorandum calling on schools and libraries to pull out the following
“subversive” books for being “anti-government.” @PhilippineStar @onenewsph pic.twitter.com/tCfhqkLJOj

In the SMNI program “Laban Kasama ang Bayan” [Fight with the Nation], Lorraine Badoy, former communications undersecretary during the Rodrigo Duterte administration, and other anti-communist spokespeople, pinpointed particular words, dialogue, and even reference entries found in the 5 books that they condemned as “terroristic.” 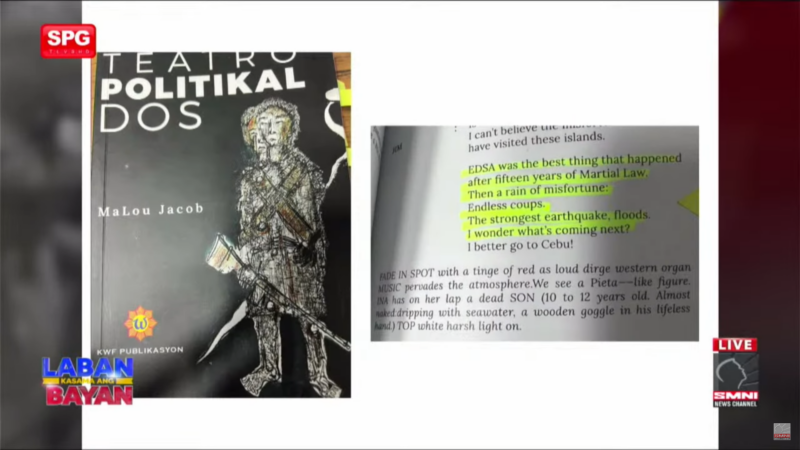 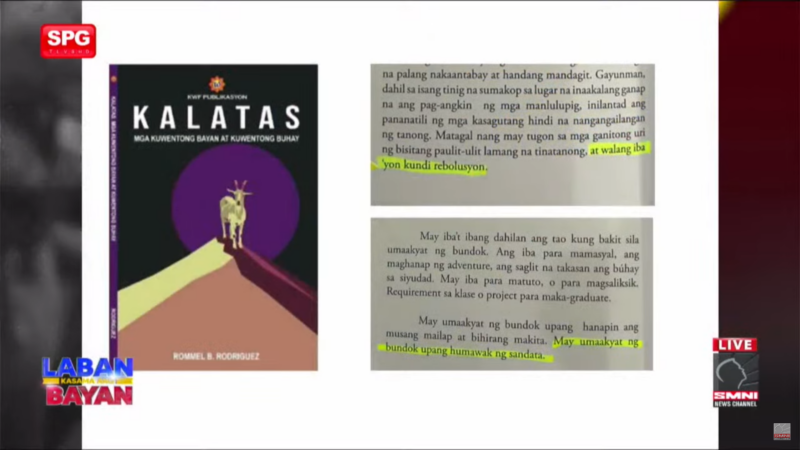 Also highlighted are lines from Filipino fictionist and literature professor Rommel Rodriguez’s “Kalatas,” a collection of vignettes and reflections. The text simply mentions the Philippine realities of some Filipinos organizing armed revolution against the government: “May umakyat ng bundok upang humawak ng Sandata” [There are those who leave for the mountains to take up arms]. 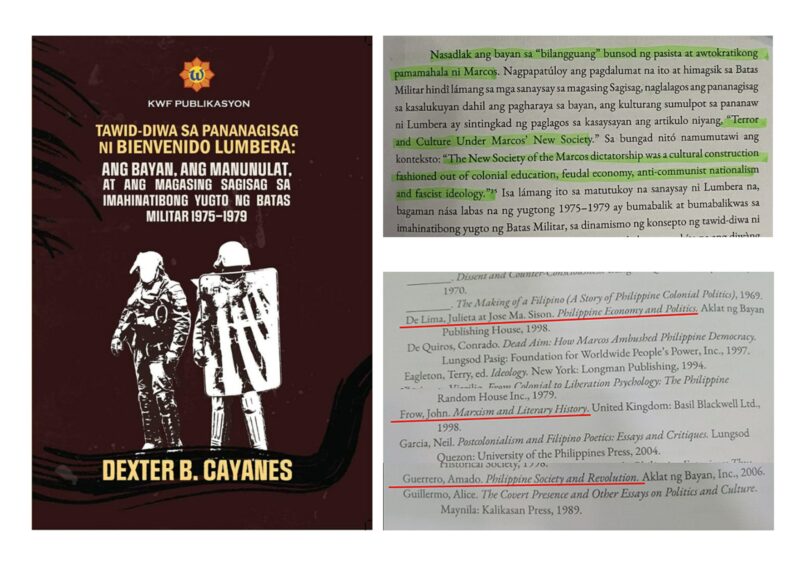 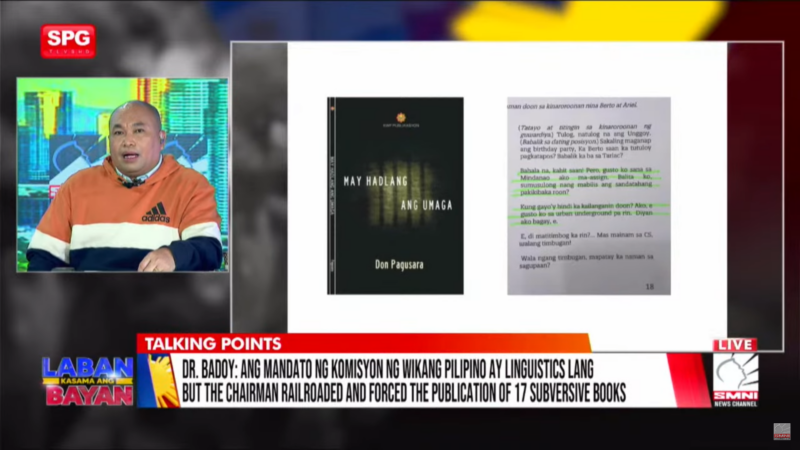 Dialogue from Don Pagusara’s stage-play “May Hadlang ang Umaga” depicting the historical circumstance of ordinary Filipinos talking about joining the armed struggle against the dictatorship is also tagged as already subversive in-itself. Pagusara is a multi-awarded playwright and poet writing in the Cebuano language and a former political detainee during the dictatorship years. 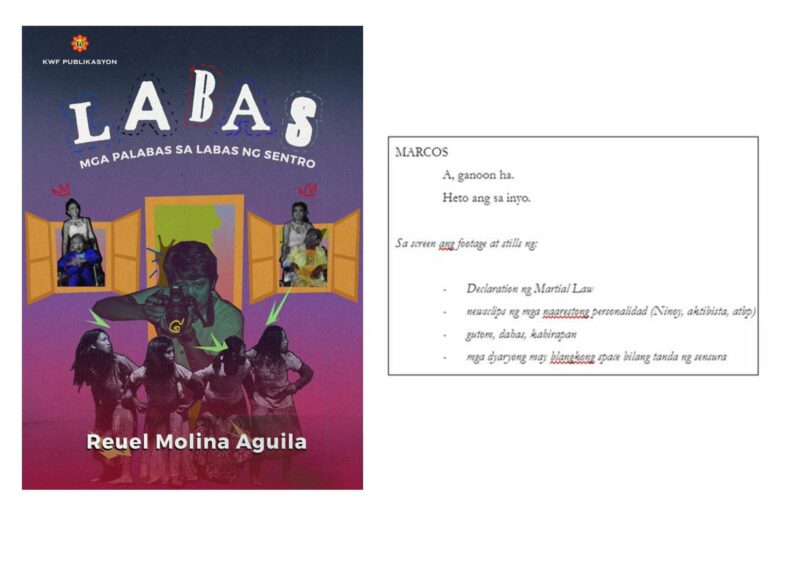 The mere showing of social realities of the arrests of activists, hunger, violence, and poverty (“gutom, dahas, kahirapan”) during the martial law era in the setting of one of award-winning playwright and professor Reuel Aguila’s plays in the book “Labas” is also offered as proof of terrorism.

In response to these accusations, the five authors penned a joint statement written in Filipino calling for the retraction of the false claims against them. The authors asserted that it was in fact the anti-communist spokespeople's attempts at red-tagging their writings as the real act of terrorism sowing fear among the literary and academic community:

Rodriguez emphasized that “Kalatas” and his other literary works aimed to tell the truth about the realities of people taking up arms rather than encourage readers to fight government:

They were taken out of context because after all, it is so easy to say they are subversive because they contained such words. Am I the only one who used ‘revolution’ and ‘weapon’? No. Many people in history have used them.

Pagusara said that the censorship of their works brings about a chilling effect among the wider community of writers, artists, cultural workers, academics, and scholars. He explained that “May Hadlang ang Umaga” is based on his real-life experiences as an activist and political prisoner during Marcos’s martial law regime:

May Hadlang ang Umaga is a fictional play written in the 1980s based on the life of political prisoners held in custody at the Youth Rehabilitation Center, a former maximum security prison at Fort Bonifacio in Taguig City. It was actually archived in my mini library when KWF Chairman Arthur Casanova offered that the book be published.

KWF Chairperson Arthur Casanova, who was pressed to resign for allegedly allowing the publication of the books in question, denied the accusations in a statement. The official asserted that the five books in fact underwent the commission's regular review process for publication, saying the contents of the books all fall within the bounds of free expression and academic freedom.

A unity statement signed by over 30 cultural, educational, and language associations, organizations, and university departments expressed support for the beleaguered authors and their censored works. The statement asserts that books can cite even texts that are considered by the state as subversive or revolutionary:

The academic freedom of writers, teachers, researchers, and all citizens include writing, analyzing, investigating, citing, referencing, and using whatever writing, whoever authored and whoever wrote it.

The University of the Philippines’ Department of Filipino and Philippine Literature, where Aguila and Rodriguez are faculty members, pointed out the irony of the censorship of the five books written in the Filipino language during the country’s Buwan ng Wika [Language Month] and by the government commission tasked with promoting the national language no less.

The Congress of Teachers/Educators for Nationalism and Democracy (CONTEND), an organization of activist faculty and academic workers at the University of the Philippines, meanwhile contextualized the latest case of book censorship in the country's long history of red-tagging:

This incident cannot be divorced from other attacks on academic freedom in the past few years under the Duterte regime and attempts to distort history from the Marcos camp. We remember the purging of historical and political books tagged by the state as “subversive” from state university libraries, the red-tagging of certain bookstores, and the banning of websites and media outfits that cover the realities of the Filipino people.

On September 21, 2022, KWF Commissioners Alain Russ Dimzon, Angela Lorenzana and Hope Sabapan-Yu officially withdrew their signatures from Memorandum No. 2022-0663 through Resolution No. 27. The issuance of the new resolution came to light at a session of Philippine Congress, when activist lawmakers under the Makabayan (Pro-People) Coalition pressed the issue of book censorship during the hearing for the proposed 2023 budget of the KWF.

Alliance of Concerned Teachers Party's Congressional Representative France Castro said that this pushback against book censorship “would not have been done if not for the clamor of the people and strong condemnation of the people against attacks on academic freedom, freedom of the press, and free speech.”

Disclosure: The author teaches at the University of the Philippines Department of Filipino and Philippine Literature. He is also a member of the Congress of Teachers/Educators for Nationalism and Democracy.