Citizenship has been a long-standing controversial issue in Nepal 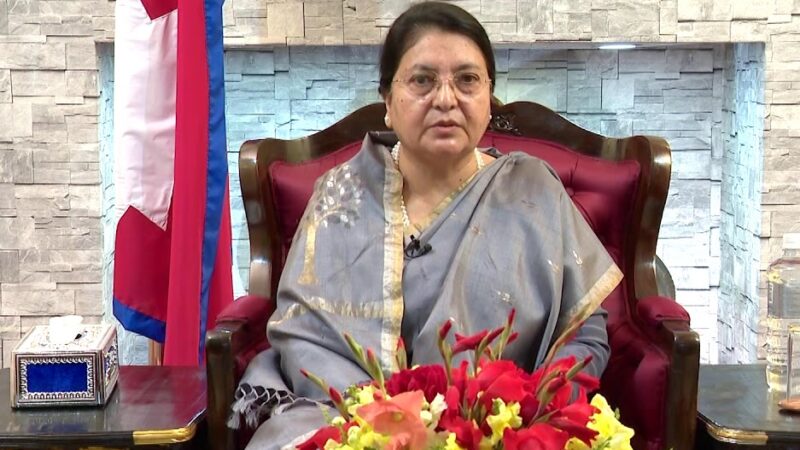 Screenshot of the President of Nepal Bidhya Devi Bhandari, taken from the YouTube channel of Gavi, the Vaccine Alliance. Fair use.

The President of Nepal Bidhya Devi Bhandari is facing wide criticism for her recent decision regarding an amendment to the citizenship bill. The matter escalated when she refused to endorse the amendment to the Citizenship Bill 2006 which was passed by the house of representatives of Nepal on July 22, 2022. Accusing her of breaching the constitution, the Supreme Court demanded an explanation of her actions regarding this matter.

Cadres of All Nepal National Free Student Union's (Revolutionary) burns an effigy of President Bidhya Devi Bhandari as she refused to sign the citizenship bill presented by House of Representative in Kathmandu, Nepal on Wednesday, September 21, 2022. pic.twitter.com/yITbPsiy5d

The citizenship bill has been a long-standing controversial issue in Nepal. The first Citizenship Act of 1952 was not comprehensive as it didn't distinguish between citizenship by descent and citizenship by naturalisation. The act was suspended in 1960 when King Mahendra Shah banned political parties and introduced absolute monarchy. The Citizenship Act of 1964 removed provisions for citizenship by birth and distinguished between citizenship by descent and by naturalisation. It was amended several times until the Nepal Citizenship Act 2006 came into effect. The country is now following the 2006 act where some people living in Nepal are denied access to citizenship for various reasons and it gets complicated when a Nepali mother is married to a foreign man or to someone who cannot be found. Nearly half a million people in Nepal are deprived of citizenship, which has caused them to become stateless and be denied access to government employment opportunities and social security.

The recent law regarding citizenship is biased against women, they don't have equal rights to pass citizenship to their spouse or children. As per the constitution, anyone who is born in Nepal can apply for citizenship from both parents’ sides, but in practice, it's never applied. Single mothers are facing challenges to acquiring citizenship for their children. Secondly, a foreigner married to a Nepali man has a straightforward path to applying for citizenship which is not the same for a foreigner married to a Nepali woman. They would be entitled to a naturalised citizenship. Naturalised citizens in Nepal are not allowed to hold key constitutional posts such as President, Vice-President, Prime Minister, Head of the Federal Legislature Head of the Federal Judiciary, Head of Security Forces, Head or Deputy Head of Federal State. Children born to a Nepali father and a non-Nepali mother will be able to acquire citizenship by descent, whereas children born with a Nepali mother and a non-Nepali father will always receive naturalised citizenship, as a result, they will be denied by the country's major leadership roles.

President of Nepal with you I stand.

The Citizenship amendment bill hasn’t perceived men and women of Nepal to be equal in terms of providing lineage citizenship.
The local election on horizon, this new bill provides free citizenship to any person affiliated to party agenda. NO!

Nepal is preparing for the upcoming parliamentary elections in November and analysts say that the citizenship bill issue is just a political agenda for leaders. The opinion on this matter is deeply divided; some believe that the president's action is to protect the nation.

Journalist Saloni Murarka reports that some quarters are supporting the stance of the president:

Kathmandu: National Youth Federation of Nepal close to CPN-UML party carried out a rally in support of the President's move to not certify the citizenship bill. ‍ pic.twitter.com/fYIjlyQdfC

There have been protests by the stateless people against the move of the president. People are also voicing their opinions on social media. Researcher Prabhakar Bagchand commented:

Refusing to sign the bill is an assault on reason ……it is an attempt to undermine sovereignty of the elected Parliament…..https://t.co/9XEdEmxos3

The 1st woman President of Nepal has refused to fulfil her constitutional duty to endorse a twice-tabled bill on citizenship rights. Her objection is not that it grants too few rights to women as compared to men—which it does—but because it grants women too many rights.

Citizenship, especially the process of acquiring it, is a deeply sensitive issue for any country. However, effective pathways for the upcoming generations, and more transparent policies and governing forces are required to tackle this chronic issue in Nepal. Deirdre Brennan, a PhD candidate at the Peter McMullin Centre on Statelessness, at the University of Melbourne, comments on this issue:

The [amendment to] citizenship act was only ever going to compliment the discrimination already laid down in that document. While there are immediate forms of relief for many of Nepal’s stateless youth, the battle to repeal gender discrimination in the constitution’s citizenship provisions is the next great feat for Nepal’s citizenship-equality activists.