Catholic priests are among the few remaining critical voices in Nicaragua 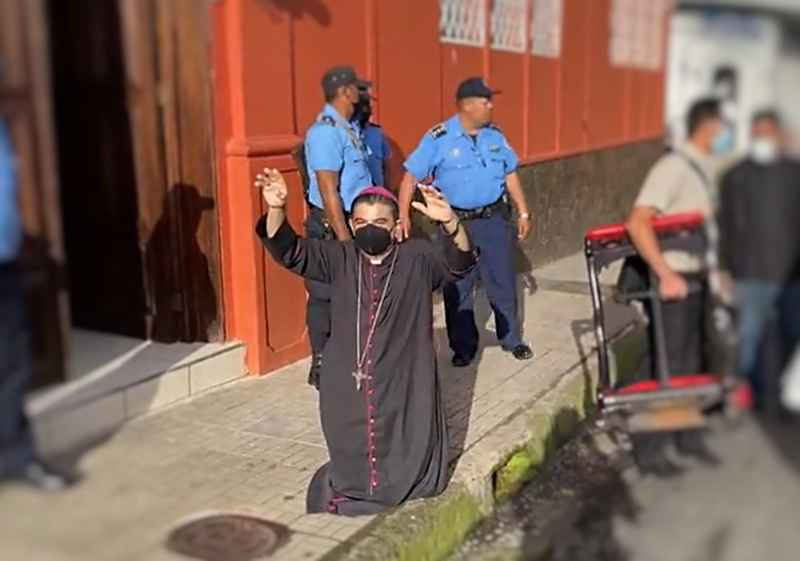 Screenshot of the Diocese of Matagalpa's Facebook Live on August 4, 20222.

This story, which is part of the Civic Media Observatory*, was written by a contributor who wished to remain anonymous for safety reasons.

Nine Catholic priests are now in jail in Nicaragua, one bishop is under house arrest and several religious men have fled the country to avoid imprisonment. After the shutdown of hundreds of civil society organizations in the past couple of years and the arrest of political activists, the Nicaraguan clergy was one of the few remaining critical voices in the country. The arrests of clergymen have raised the number of political prisoners in Nicaragua to 205.

According to the Global Voices Civic Media Observatory research, several strong narratives are at play in Nicaraguan media, vying for attention. For the Ortega-Murillo government — considered authoritarian by international observers — the crackdown on priests is legal because they consider them to be “rapists,” “women-beaters” and part of a plan to destabilize the country. From the perspective of the clergy, the Catholic population, and independent media, Nicaraguan authorities are persecuting religious people to further criminalize dissent.

The sociopolitical crisis ignited in 2018 when the government repressed massive protests of citizens demanding to keep their social security system. After the excessive use of police force, protesters demanded that President Ortega resign — Ortega has now been in power for 15 consecutive years. During this violent crackdown, about 350 people died, hundreds were sent to jail and faced what is widely considered in media and human rights organizations as sham trials. Since then, Nicaragua has become the country with the second highest rate of emigrants seeking asylum, after Afghanistan.

At the time, Catholic Church leaders had become formal mediators between Ortega and the opposition. But their recommendations of ceasing the repression and their humanitarian help were not well received by the regime: on July 19 that year, Ortega said that the Catholic Church was part of a coup attempt against him and called the priests “sons of the devil” and “terrorists.”

Since then, Ortega has threatened and harassed priests who ultimately fled the country, expelled the Apostolic Nuncio and the nuns from the Mother Teresa order from Nicaragua, closed several Catholic media and non-profit organizations and has used Sandinista paramilitary forces to attack churches and bishops.

Several strong and contradictory narratives are circulating on social media. The Global Voices Civic Media Observatory works to identify and analyze them, as well as their impact, through a deep analysis of media items. See the analysis of the following narratives in the research's dataset.

Democracy activists, the clergy, and Nicaraguan Catholics share these narratives:

The last wave of repression against the Catholic Church started on August 1 with the cancellation of seven Catholic radio stations that belonged to the Diocese of Matagalpa in the north of the country, allegedly because they failed to provide legal documentation. During Mass, Bishop Rolando Álvarez, leader of the Diocese of Matagalpa, refuted this and said that these closures were politically motivated. After his declarations, several police officers prevented Álvarez from going back to church by blocking his residence.

A couple of days later, Álvarez stepped out, knelt down, and prayed in front of the police officers to ask them to stop harassing him. The image became viral. Café con Voz, an independent online media, tweeted:

The image that goes around the world. The Bishop of Matagalpa, @DiocesisdeMat, on his knees at the door of the Curia of the city, prays surrounded by Sandinista guards who besiege him and have kept him under siege since yesterday.

The siege continued for two weeks, until August 19, when heavily-armed police raided Álvarez’s residence and arrested him and other priests who lived there. Nicaraguan Bishop Silvio Báez, exiled in Miami, tweeted:

With an indignant and aching heart I condemn the nighttime kidnapping of Bishop Álvarez. If anyone knows the whereabouts of my brother bishop, speak out! May his kidnappers respect his dignity and free him! Once again, the dictatorship exceeds its own evil and diabolical spirit.

The Nicaraguan Police released a statement informing that Álvarez had been taken to the capital city of Managua, where he was facing an investigation for “organizing violent groups and inciting them to carry out acts of hate against the population… with the aim of destabilizing the Nicaraguan state.” Pro-government social media users supported the arrest and pushed the narrative that it wasn’t repression, but the pursuit of independence from U.S. interference and security. Ortega built his political career during the Cold War and the narrative against U.S. influence in Central America.

And Remember!!
👇 These criminals ARE NOT the Church…

Álvarez is currently under house arrest, unable to be reached, in his parent's home, and the police have not provided updates on the investigation. He appealed to faith and prayer in one of his last tweets:

The Nicaraguan State's conflict with the Catholic Church has reached international levels, with reactions of disbelief from Catholic priests worldwide, like in the U.S., Costa Rica, and Honduras. The situation also put pressure on Pope Francis to make a statement, but his long silence made people question his commitment to the Catholic clergy of Nicaragua.

The quietness of Pope Francis raised speculations about whether he was supporting the Ortega-Murillo regime (since he recently confessed to having a personal relationship with Cuba's president, Raúl Castro). Others think his public silence is a strategy to keep the Nicaraguan priests safe by not adding fuel to fire. After several months of social media pressure, Pope Francis spoke out on August 21:

I follow the situation in Nicaragua with concern and pain. I would like to express my conviction and my hope that, through an open and sincere dialogue, we can continue to find the basis for a respectful and peaceful coexistence. #Letuspraytogether

What dialogue does Pope Francis propose in Nicaragua? An “open and sincere” dialogue is only possible without political prisoners, without a police state, and with international guarantees.

Nicaraguan officials have used the Pope's apolitical message to their own ends, alleging that the Pope wants priests to face trial. A Nicaraguan digital activist tweeted what the Head of the Ministry of Families said:

The MIFAM reminds the Nicaraguan Catholic clergy of His Holiness Pope Francis’ repeated calls for non-impunity for priests who commit crimes against decorum, against human dignity #UnitedInVictory #BlessedAndFreeCountry

It is unclear if this most recent crisis will further bury any chance of peaceful dialogue in Nicaragua.

*This story is part of Global Voices’ Civic Media Observatory. In the Observatory, we work to decode the nuances of narratives within complex and chaotic media ecosystems. This story synthesizes recent research on Nicaragua's media ecosystem and provides context and subtext behind events of public interest. You can see the research's public dataset here.