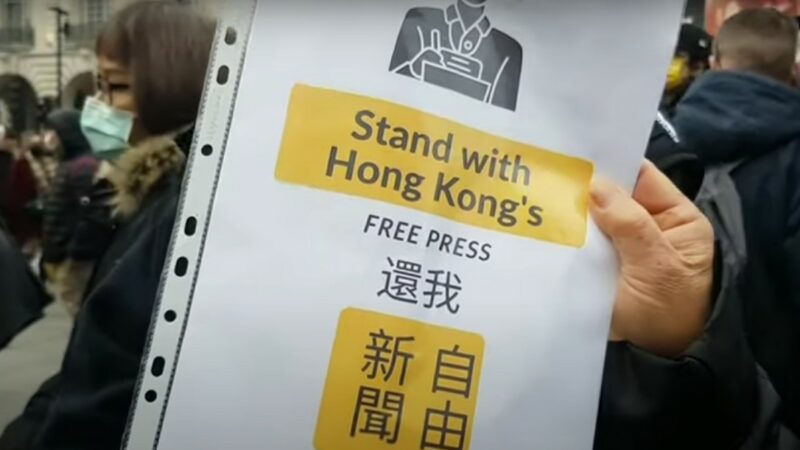 This post was written by Hillary Leung and published in the Hong Kong Free Press (HKFP) on September 23, 2022. An edited version is published on Global Voices under a content-sharing agreement.

Hong Kong’s press freedom index has sunk to another new low for the third consecutive year, with reporters questioning the media’s effectiveness as a watchdog amid an increasingly challenging environment for the industry.

The Hong Kong Journalists Association (HKJA) published the index on September 23, 2022. The annual index comprised two sets of figures based on two surveys – one questionnaire was given to those working in the media field, and the other was given to members of the public.

The press freedom ranking representing media workers’ views stood at 26.2 this year, down from 32.1 last year. The decline is the steepest drop since the HKJA began compiling the index in 2013.

More than half of the respondents from the public group stated that press freedom regressed after 2020. pic.twitter.com/Q3gPhvDM3T

In a statement, the HKJA said it believed that the environment for news reporting in Hong Kong had “drastically deteriorated over the past year.” The group cited the closure of Apple Daily last June, as well as Stand News, which closed last December, and Citizen News this January. Executives and editors at Apple Daily and Stand News are currently facing prosecution under the national security legislation or the colonial-era sedition law after their newsrooms were raided. The statement read:

As a direct consequence of a shrinking news industry, less information of public interest is now available, and those that remain accessible become more homogenous than diverse.

The HKJA surveyed 169 people in the media industry and 1,016 members of the public in May. The group added it was noteworthy that 737 questionnaires were sent out, making for a response rate of 22.9 percent. In contrast, the response rate last year was 82.8 percent. The group explained:

Some journalists we approached for the survey said they fear the HKJA has come in the crosshairs of authorities and therefore they fear retribution for filling out a questionnaire conducted by the HKJA.

State-backed media outlets have lashed out at HKJA, calling it a “fake union” that had “caused chaos in Hong Kong.”

The survey also found that 97 percent of media workers believed that the press freedom environment had become “much worse” in the past year, while 53.5 percent indicated the same sentiment.

The HKJA added that a press that can operate in a “free and safe environment” would be “crucial” to maintaining Hong Kong's status as an international financial centre.

The index's release comes a day after Chief Executive John Lee spoke at an event for media workers celebrating China's upcoming National Day, in which he told selected journalists to deliver the “right Hong Kong message” to the world.

HKFP was denied access to the invite-only event. After initially citing COVID-19 regulations and incorrectly claiming the event was for Chinese-only outlets, an organising committee staffer eventually claimed that only “mainstream media outlets” were invited, without explaining further. State-run outlets and the SCMP attended the event.

During his speech, Lee warned reporters to distinguish right from wrong and keep their distance from “fake media” and “bad elements” that “destroy press freedom.”

Authorities have said that they are looking into enacting a “fake news” law to combat misinformation. Critics say such legislation could be weaponised to crack down on news outlets and further stifle press freedom.