Many felt scared, lonely, and bored under stressful restrictions 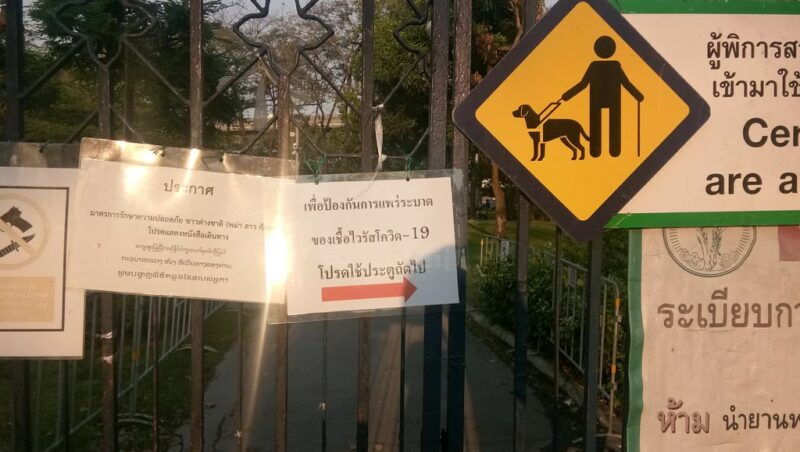 Second from left: A banner demanding Lao, Cambodian, and Myanmar people show passports before entering the park. Photo and caption from Prachatai, used with permission.

This article by Seoung Nimol was originally published by Prachatai, an independent news site in Thailand, and an edited version is republished by Global Voices under a content-sharing agreement.

Living far away from home during the COVID-19 pandemic, Cambodian students who came to Thailand to pursue their studies experienced problems stemming from lockdown, lonesomeness, and a sense of loss.

According to a UNICEF-led study in 2020, 7 out of 10 children and young people worldwide reported that COVID-19 had a negative impact on their mental health. The majority were worried about family household incomes, their studies, and their future education, and employment opportunities.

Thai universities were ordered to close in March 2020, as the number of COVID-19 cases rose dramatically. It was not until 2022 that universities started to resume on-site teaching.

Pich Somaly, a fourth-year agricultural technology major at Burapha University, said once the closure was announced, the silent atmosphere left by Thai students who had returned home was fearsome. That was not an option for her and four other Cambodian students as the borders were closed.

All of the Thai students had already gone back home. Only a few Cambodian students remained, and it was very quiet in our building. We were scared and worried about getting this disease since we came to study far away from home. These feelings made us think too much and caused stress.

Life was completely changed. She claimed that she always had to consider things carefully before acting, but this was accompanied by emotional distress and worry. She was always so nervous when she went to get food.

It was hugely challenging to buy food. I was very vulnerable to infection if I went to the market. I stayed in the room for 14 days for quarantine. I was afraid of getting infected because I had not been vaccinated. I was shocked because it is not our home.

Mental health issues may also arise from the disease itself, such as grief from loss of life.

Most first-year students believed they would experience a new environment by learning and communicating with people in Thailand.

Instead, they faced a bitter and challenging time adapting to the global crisis. They began their studies with worry, no social interaction and anxiety about the deteriorating COVID-19 situation, which had a significant negative impact on their mental health.

Seun Ung Mengchou, now president of the Khmer Students Association at Thammasat University, said she was still a freshman in 2020 who had just received a scholarship to study in Thailand from her university. At that time, the COVID-19 situation was terrible in Thailand.

Her first experience of living abroad was disrupted by the pandemic and it proved to be very challenging for Mengchou. She claimed that while struggling to stay in their rooms, every Cambodian student felt fear and loneliness, while Thai students could go home to their families.

Our mental health has also been seriously affected by the Covid-19 crisis. We didn't have relatives here, and we were anxious about what to do if we became infected. We have been far away from home.

Many patients had to stay outside the hospital due to the situation at that time. That was incomprehensible. We felt lonely; we were homesick. We were troubled about our studies and the infection situation.

Most students were forced to sit in their rooms and study online, which was not a good study environment. Students were becoming more stressed, which could reduce productivity at work and poor academic performance.

All students had to switch to online learning in order to assure their safety. Their learning was impacted since they were unable to adapt quickly to the unexpected changes.

Somaly said that her major was in science and all on-site laboratory sessions were postponed. It was tedious and exhausting for her to spend three hours studying in front of a computer.

Because we could focus only on the first session, learning online was difficult to follow. We found the virtual classroom to be boring. Only 30 to 40% of what I learned online was truly effective, in my opinion. I only had lessons without a lab that I did not fully understand.

However, lab sessions were resumed when the universities reopened at the end of 2021, so it was not a big concern for her major, she said.

According to Meng Chou, active participation and intense concentration are both necessary for online learning to be extremely effective. Students were unable to focus, however, because they continued to study in an uncomfortable environment.

Phara Pich Pisey, a student at Thammasat University's Faculty of Architecture, started her first year of study online. Difficulties arose as her major required students to cooperate in group projects for a whole year. Discussions tended to be difficult as they could not convene face-to-face.

She continued by saying that working in teams and studying online was less effective, stressful, and greatly affected academic performance.

We had a number of projects to work on, and there was no exam. Our first-year study projects did not get good results because of the online group discussions. Some members did not help, and the quality of the work was not good. It was difficult to learn and discuss, compared to physical classes.

On the upside, Cambodian students were facilitated by their universities to receive COVID-19 vaccines, like Thai students.

Somaly and Mengchou said in 2021, they and their Cambodian friends studying in Thailand received assistance from their universities.

Somaly's university also developed a mental health consultation and counselling service for students after observing mental health issues among students throughout the epidemic. After the COVID-19 situation in Thailand improved, and the lockdown measures ended, their lives improved. They were able to go out and interact socially.

As a result of their experiences, Cambodian students requested that the university set up a mental health team, an international student assistance team to communicate with, support and guide them in any emergency situations that arise in the future. 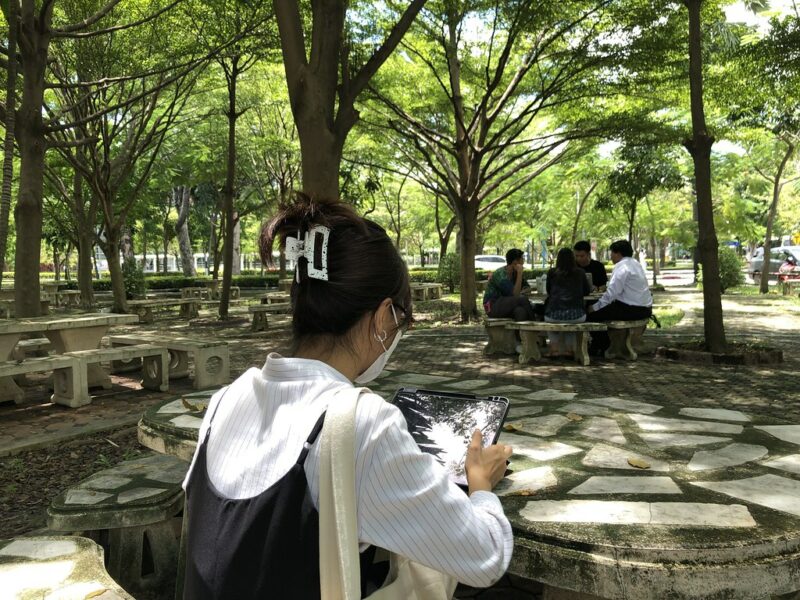 A Cambodian student reviews a lesson during her free time at Thammasat University on September 9, 2022. Photo and caption from Prachatai, used with permission.