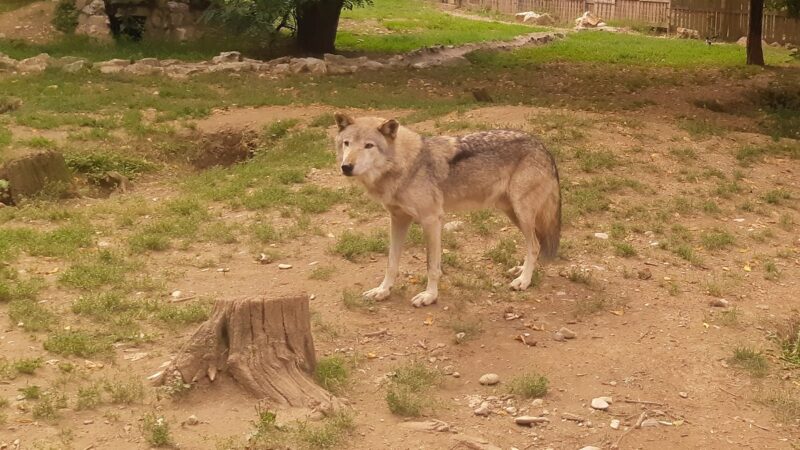 A wolf in the Skopje zoo. Photo by Filip Stojanovski/Global Voices, CC BY.

The wolf (Canis lupus) in North Macedonia is widely considered a pest and is regularly slaughtered, despite its key role in maintaining a healthy ecosystem. It is one of the three big predators inhabiting the country’s mountains, together with the bear and the Balkan Lynx, but is the least protected.

Hunters are encouraged to hunt and kill the creature and even receive a monetary reward for killing one. However, environmental associations are raising the alarm that the wolf population is declining, which could have devastating impacts on the mountain ecosystem. It is estimated that there are currently over 400 wolves in the forests of North Macedonia, which apart from being legal hunting prey, face a number of other threats, including hybridization with dogs. 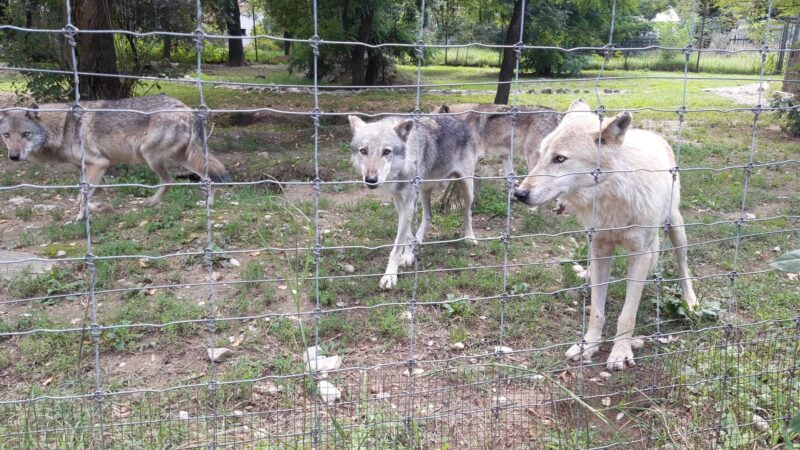 Under the current hunting laws in North Macedonia, the wolf, along with the fox, the marten, the weasel, and many other animals and birds, are free game for hunters, as there are no temporary or permanent bans on hunting them. The Ministry of Agriculture also offers monetary rewards for killing “dangerous” wild animals.  Hunters can bring in about 50 euros (around 50 dollars by the current exchange rate) for killing a wolf.

“The law must be changed, and the hunting of the wolf must be limited through hunting bans because its population in the country is constantly declining,” says Dime Melovski from the Macedonian Ecological Society in a statement for Meta.mk.

He points out that while permanent protection is not a good solution, the government needs to establish hunting restrictions for certain periods. He also suggests enacting quotas to limit hunting, depending on the exact number of wolves on the hunting grounds. Melovski says that more sophisticated counting methods, such as genetic counting, must be applied, as it is very likely that the current wolf count is inaccurate and there is some counting overlap since the wolf lives and feeds on large territories. He stressed:

We are perhaps among the last countries in Europe where the wolf is considered a pest and the its killing is not limited, and there is a reward, moreover, which serves as an additional motivation for killing wolves, both for the hunters and for the cattle breeders.

One of the biggest problems in the efforts to protect the wolf, according to Melovski, is the open promotion of hunting tourism and the attraction of foreign hunters to the country, which must stop immediately. He says that the lack of any restrictions encourages the organization of hunting campaigns because the foreign hunters in this country exclusively have the opportunity to shoot a wolf.

Wolves in North Macedonia mainly inhabit the mountains and prefer forests, and sometimes visit the lowland agricultural areas near villages. 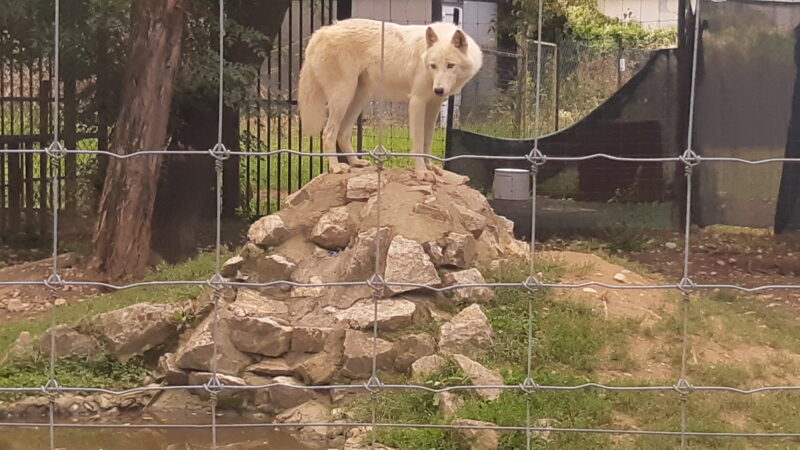 Alongside the lynx and the bear, the wolf is apex predator in North Macedonia. Photo of young wolf in Skopje Zoo by Global Voices/Filip Stojanovski, CC BY 3.0.

According to Vojo Gogovski, state advisor for forestry and hunting in the Ministry of Agriculture, the wolf population in the country is around 400 individuals and is stable. North Macedonia has the largest, most longstanding population of wolves in Europe. Counting is carried out regularly, at least every ten years, within each hunting ground in the country. In a statement for Meta.mk, Gogovski explained:

For big game and small game there is a methodology for collecting data on the quantity that is accepted everywhere in Europe and in our country. A count or estimate of the number can be made, and based on it, the annual growth dynamics are defined. If there is a need, in five years or shorter, the planning documents can be revised.

New hunting regulations are being prepared, with proposed draft law put on public consultations since April 2021. The published draft continues to list the wolf among wild animals without protection, also allowing night hunting and use of spotlights. It also allows the Ministry for Agriculture to issue rewards.

At one point, the wolf was under protection, but Gogovski says that at the time, the population got out of control. Domestic livestock suffered and numerous losses were attributed to the large wolf population. Though because there was not an obligation to ear tag the livestock, these numbers are likely inflated because citizens could receive compensation from the state for wolf-related deaths. He stated:

There is no one who cares more than us for the protection of the wolf. The real hunters take good care of animals. The population is stable, and that’s because we’re taking care of the game that is its food. But the number must be maintained at a certain level. So far, there has not been a case of the monetary reward being the motive for killing; instead, most often the motive has been the protection of the domestic livestock. I claim that there is no such thing as a classic wolf hunt.

The environmental organization Eko-svest (Eco consciousness) recently, on World Wolf Day (August 13), called to take precautionary measures to ensure the wolves stay in our forests, where they belong. Environmentalists believe that although the modern lifestyle often brings humans into conflict with wolves, they are necessary and invaluable in maintaining a balanced ecosystem. Their impact as predators changes the behavior of other animals, protects forests from parasites, and even protects rivers from erosion and damage. Their statement read:

The wolf in this country is placed in the near threatened category (NT). The reason for this is that it is considered harmful wild animal, so commercial hunting is organized throughout the year, and, also new infrastructure projects are fragmenting its habitats. According to the official estimates, over 400 individuals live in our country, but its population is not regularly monitored. 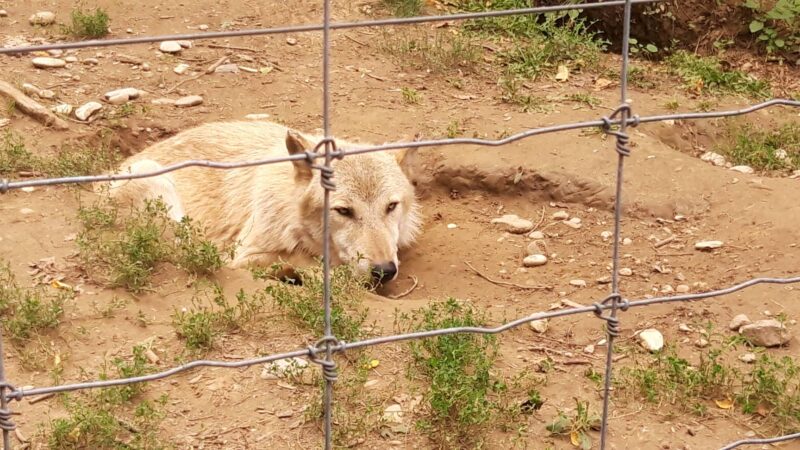 She-wolf lying in a hole she dug in the enclosure of Skopje Zoo. Photo by Vasil Buraliev, used with permission.

Worldwide, the wolf is protected by three international conventions, The Washington Convention (CITES – Convention on International Trade in Endangered Species of Wild Fauna and Flora); then the Annexes II, IV, and V of the Directive on the Habitats in EU, and is listed as strictly protected species in Annex II of the Bern Convention.

The International Union for Conservation of Nature (IUCN) classifies the wolf as “least worrying” in Europe, because although it is endangered or vulnerable at the national level in several countries, it is rising at the European level both in number and in range. However, the wolves are still legally hunted in a number of European countries that are not members of the European Union, including Russia, Belarus, Ukraine, North Macedonia, and Albania. Wolf hunts are also a tourist attraction in many countries. Limited legal hunting is also carried out in Finland, Norway, Lithuania, Latvia, Estonia, Bulgaria, Romania, and Slovakia.