Iranian women are removing their headscarves to show civil disobedience 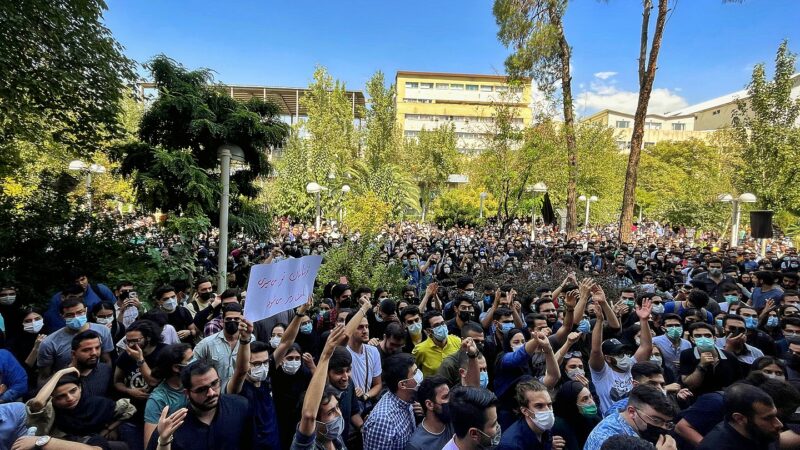 Students of Amir Kabir university protest against hijab and the Islamic Republic. September 2022. Image by Darafsh – Own work, CC BY-SA 4.0.

Protests erupted throughout Iran over the death of Mahsa (Zhina) Amini, following her detention by the country's morality police for allegedly violating the hijab rules on Friday. Mahsa was 22 years old.

Iranian women started removing their headscarves as a show of civil disobedience in response to Amini's death; some have burned them in the open; others have shaved their heads or cut their hair short and posted selfies on social media.

As they experience the same tyranny and fight for freedom and justice, Iranians living in various places are witnessing unprecedented scenes that transcend gender and ethnic lines.

These are some of the most beautiful moments I have seen in my life as an Iranian. What unbelievable bravery.

In a free Iran, monuments and statues will be erected to these fierce lionesses ✌🏻💙❤️#Mahsa_Amini #Iran #مهسا_امینی pic.twitter.com/zUVwEJXNYZ

Since the 1979 Islamist takeover of the Iranian government, discriminatory laws against women have been more prevalent in Iran. Their lives have been significantly impacted in a variety of ways, from the job market to how they should dress. For instance, Iranian women are compelled to wear the headscarf at all times. And many Iranian women have persevered in rejecting and disobeying the Islamic Republic despite official punishment of everyone who does so.

Mahsa Amini, a Kurdish native from Saqqez in the Kurdistan province, passed away on Friday in a Tehran hospital after three days in a coma.  She was allegedly assaulted inside the police van that transported her to the detention center, according to witnesses.

Police denied the allegation and said she suffered a “sudden heart attack” while her family rejected the claim. The UN called for a probe into Mahsa Amini's death.

On Saturday, protests broke out all over the nation. They started in the provincial cities of Kurdistan and spread to Tehran, Shiraz, and Isfahan as well as northern cities like Rasht and Sari, Mashad, and Bandar Abbas.

“Death to the dictator,” “Woman, life, and freedom,” and “Death to Khamenei” were among the slogans that Iranian demonstrators chanted.

Footage circulating on social media suggests that protests following #Mahsah_Amini‘s death have occurred in 19 of #Iran‘s 31 provinces within the past three days. A thread: 1/5 pic.twitter.com/bJxZAk4zbs

Security forces in the Kurdistan province have killed at least 9 people and injured hundreds more, according to reports based on statements from Iran's state. However human rights organizations claim that the number is much higher.

Several videos show violent clashes between protesters and security forces. Demonstrators are assaulting isolated security personnel in the video below:

On Wednesday, as protests entered their fourth day, the hacker collective Anonymous claimed to have initiated cyberattacks against the two primary Iranian government websites as well as a number of media websites, in support of the demonstrations.

Anonymous hackers have claimed to be behind attacks on several websites affiliated with the Iranian government amid protests following the death of 22-year-old Mahsa Amini. https://t.co/Oc5TQiX39C

Iranian women are not waiting for a savior

Iranian women are not waiting for a savior and are bravely waging their own fights in light of what is happening in Afghanistan and other parts of the world.

It is impossible for any political or religious system to be stable or long-lasting. No oppressive regime can exist indefinitely because, in the end, the people's struggle for freedom will be revealed, and justice will triumph.

I wish I was her fr#Mahsa_Amini#مهسا_امینیpic.twitter.com/jtULSZaqXb

Mahsa represents the century-long fight for women's emancipation waged by Kurdish and Iranian women. Especially in the last 44 years.

It is also a representation of the fight against Islamic doctrine, which has its philosophical roots in the treatment of women.

Several artists created works to show their support for the Iranian people. 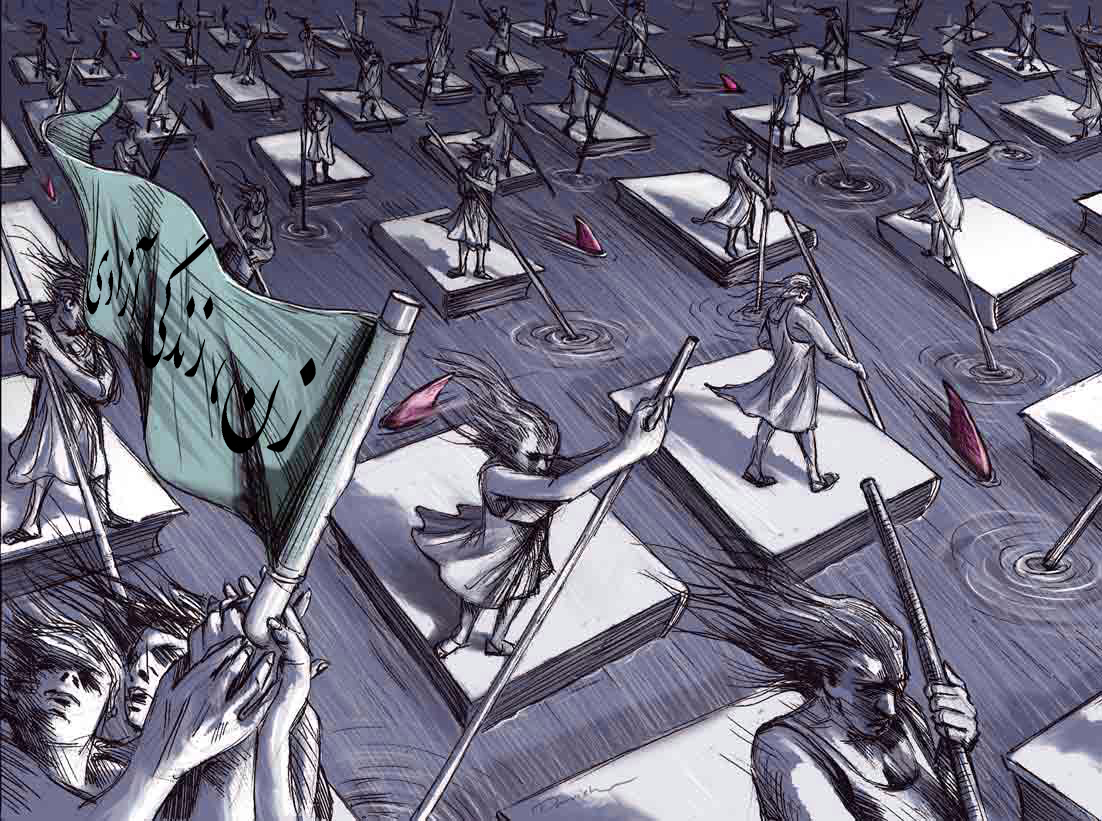 Alireza Dervish is an animator and artist based in Germany. Used with permission. 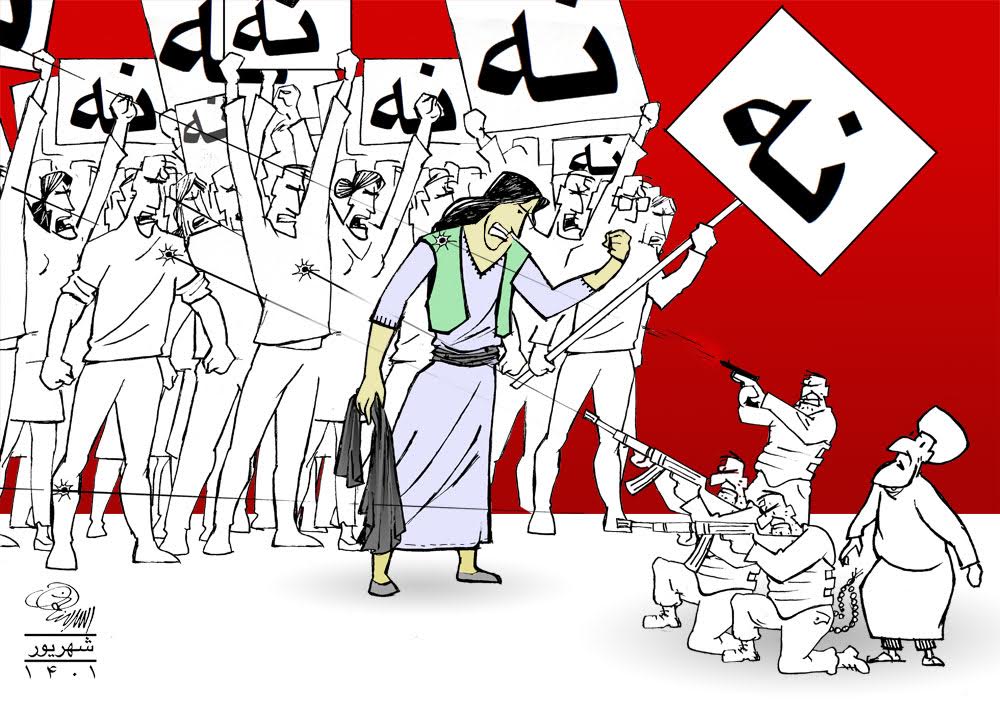 Cartoonist Assad Binakhahi, who is also based in Germany. Used with permission.