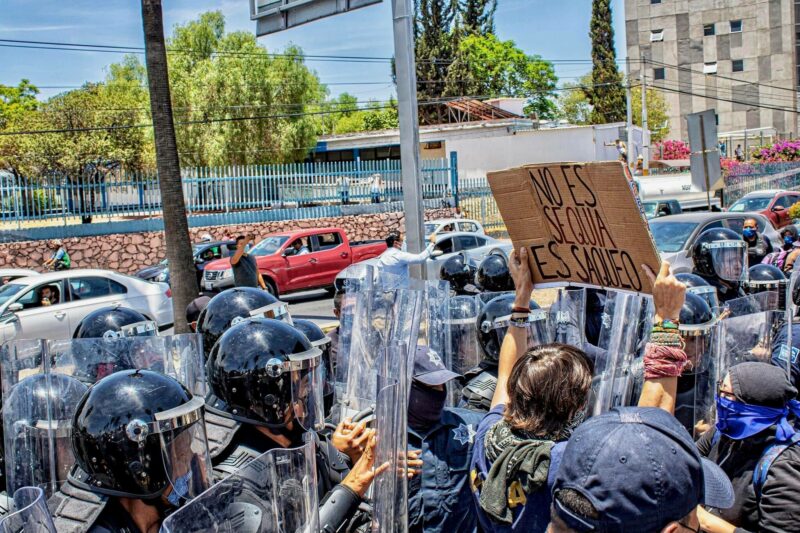 Located three hours from Mexico City in the heart of the country, the Mexican state of Querétaro — which has considerable bio-cultural diversity through which a chain of volcanoes [1] and mountains [2] spans — is facing a serious water crisis that disproportionate water management is exacerbating. The public has thereby been protesting against a new law regulating water services. Some human rights activists have also been criminally prosecuted.

Much of the environmental degradation is a direct consequence of the loss of groundwater infiltration and recharge zones, stemming from overurbanization [3]. This has led to inequalities in water access, high costs in distribution services, unregulated cuts, and increasing shortages.

#NoTeLoPierdas  [4][Don't Miss It]
Water concerns: Hydro-social conflict has left its mark on recent history. In addition to the water stress and droughts threatening our way of life, water has caused at least 14 social and environmental conflicts.

For more than three months, civil organizations, environmentalists, academic personnel, and local communities have been taking action against the so-called Concessions Law, [7] approved in May this year and criticized for advocating service concession arrangements for private operators. As well as advocating for the monopolization [8] of real estate developers [9], it fails to consider water ecology and ensure human access to it. As a result of this concession, inappropriate areas are being urbanized and the distribution of water is exclusively limited to housing units profitable to them. 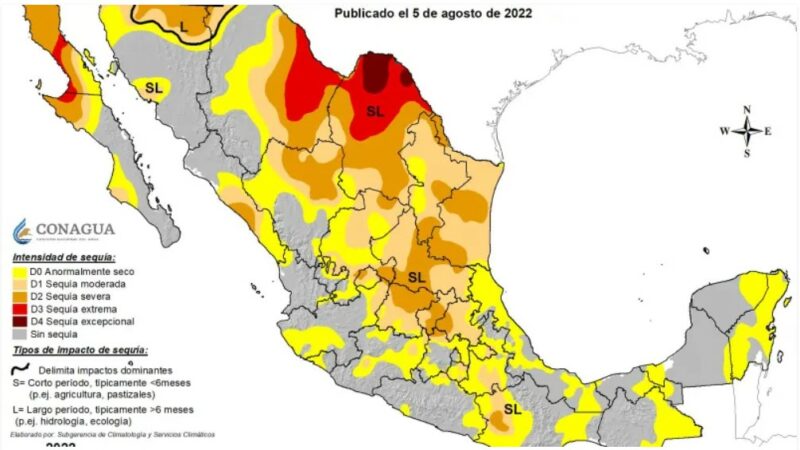 Illustration of the drought in Mexico at the beginning of August 2022, developed by the Climatology and Climate Services Sub-Directorate in Mexico. Querétaro is experiencing a severe to moderate drought.

Defenders stress that this new regulation conflicts with the recommendations of the last two United Nations Special Rapporteurs on the human right to water. It also discredits warnings about other cases of failure [10] for this model in the equitable supply of the world's water.

#PeriodismoCN [11] 💧What is the relationship between the real estate boom and the drought in #Queretaro [12]?

We spoke to activists and scientific experts who disagree with the Drinking Water, Sewage and Sanitation Services Law approved by Congress https://t.co/xV1umgDXpF [13] pic.twitter.com/pbZcWDlk82 [14]

Between May and August, the protest efforts of the Network in Defense of Water and Life (REDAVI [16]) as well as other organized stakeholders, included street demonstrations, citizen festivals, [17] discussion groups, artworks, [18] and local, national, and international press conferences. They also included legal actions that are currently ongoing, such as a provisional suspension measure where the judiciary affirmed this law's threat to specific rights. However, this is only an interim solution and does not resolve the root problem.

#Territorios [19] [Territories] | Because their Indigenous rights were violated, the Santiago Mexquititlan community obtained a provisional suspension of the #LeyDeAguas [20] [Water Law] in Querétaro, which privatizes water management. 💧
✍️By @A_Ruiz9 [21]https://t.co/42J1yKZTqP [22]

On multiple fronts, civil society considers the response to the water defense in Querétaro to be arcane and a form of political persecution. During a peaceful demonstration on June 10, state police restrained [24] protestors, including women, children, and elderly individuals. Three young defenders were picked up using excessive force and detained. Given the local and national social pressure [25], they were subsequently released some hours later but were not acquitted of the criminal investigation. Faced with this and other events, local society has condemned this stigma, harassment, and criminalization [26] of water defense on a national scale.

Through Festival Agua que Corre [Running Water Festival], we let local, national and international citizens know our stance on the criminalization of water defense in #Querétaro [27].

Two months on from their arrest, these water defenders were still under criminal investigation. It is for this reason that society, which kept this issue current by using the #AguasConLaLeyDeAgua [32] hashtag, demands their unconditional release. This case, which has attracted the attention of the Office of the United Nations High Commissioner for Human Rights in Mexico as well as the International Human Rights Network, is not the only case of an attack on land defenders in recent years.

The #ViolenciaDeEstado [33] [State Violence] towards water defense in #Querétaro [27] was preceded by warnings for attacks on journalists, environmentalists and land defenders. This is why @FrontLineHRD [34] sent a statement to @gobqro [35] once again https://t.co/lSyQBYgqo3 [36] #AguasConLaLeyDeAguas [28]⚠️💧 pic.twitter.com/ALav9f3CRs [37]

Activists are thereby calling for international solidarity to push for these criminal cases to be closed and for the state violence towards those defending water to be brought to light, given that this is the planet's main source of life. This defense is vital in times of climate emergency.

📣In #Querétaro [27] water defenders are still being harassed, persecuted and criminalized by the authorities. Listen to the Global Press Conference 🌎🎙️ on what has happened during 3 months of fighting for water on @RIDH_INHR [39]‘s FB @RidhEurope [40]https://t.co/VpUulThr2O [41] @EndWaterPoverty [42]