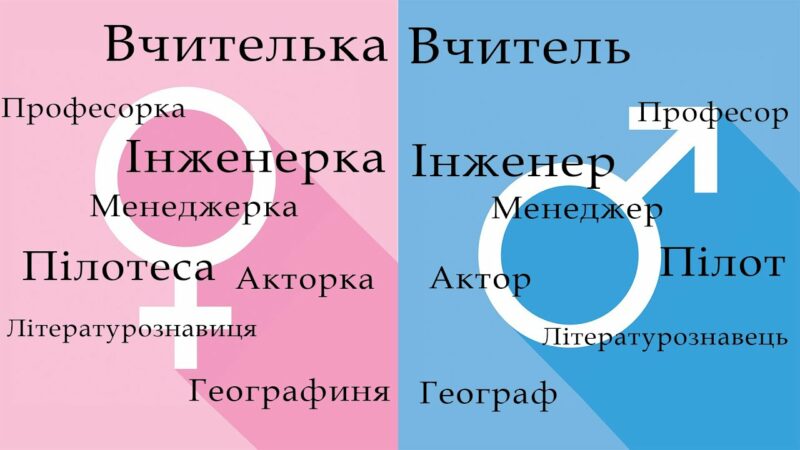 Screenshot from the YouTube channel of “Kvantova Filologiya” showing the same professions in the feminine form on the left and in the masculine form on the right in Ukrainian.

For several centuries, Ukrainian women were constrained to remain within the private sphere: they could not inherit property, represent themselves in courts, work, or take up positions in government. This is possibly a historical explanation for why there are no grammatically feminine forms for such positions. Yet, gradually, the gap between men's and women's rights was reduced, and eventually the use of feminitives became relevant and necessary.

Feminitives are characteristic to the Ukrainian language, which has three grammatical genders: male, female and neutral. This allows for the formation of feminitives by adding a suffix to an already existing noun that is male in terms of grammatical gender. The Ukrainian language counts over 13 such suffixes, but about 4 to 6 are the most productive, including -к, -иц-(-its), -ин-(-in), -ес-(-es), followed by the sound a or ya. For example: «студент» (student, pronounced stoodent) becomes as a feminitive «студентка», pronounced stoodentka.

The first feminitives surface in Ukrainian during the Middle Ages, and can be found in some of the texts of the earliest Ukrainian literature, such as the 11th century «Руська правда» (The Ruska Pravda), or the 12th century epic «Слово о полку Ігоревім» (The Tale of Igor's Campaign). In the 16th century, feminitives make their appearance in dictionaries, including the first printed Ukrainian dictionary called «Лексиса» compiled by Lavrentiy Zizaniy, and which dates back from 1596 and contains seven feminitives. The number increased over time. From the 17th to 19th centuries, feminitives were used mostly orally, though leading Ukrainian writers such as Taras Shevchenko and Lesya Ukrainka often used them in their poetry.

According to academics Ivan Ogienko and Mikhail Ginzburg, feminitives were removed from Ukrainian during the Soviet period, starting in the 1930s, as the authorities aimed at assimilating Ukrainian into Russian. The Russian language is dominated by masculine nouns describing professions, and counts only four suffixes that can produce feminitives. Besides, feminitives in Russian often have a negative connotation.

In the early 2000s, people in Ukraine started to reconsider their attitudes towards the development of their language, and that included the active use of feminitives. One explanation for this is the mainstreaming of feminist movements, that instrumentalized a return to the use of feminitives when describing professions. The first Ukrainian version of the seven volumes Harry Potter in the translation by Viktor Morozov initiated in 2002 included such feminitives such as «професорка Макґонеґел» (she-professor McGonagall), or дракониха/драконка (she-dragon).

In 2012, Professor Anatoly Nelyuba published a dictionary called  «Словотворчість незалежної України 1991—2011» (“The creation of words in independent Ukraine, 1991-2011″) that describes the feminitives that appeared in the Ukraine press over the period.

And, in 2019, Ukraine adopted a new orthography that included recommendations and rules for the formation of feminitives, which officially made them as part of the normative Ukrainian language. Thus, if, before that, feminitives were used only in verbal or poetic language, and in dictionaries, now they can be used in all linguistic domains, including in scientific and official communication.

Thus in 2020, based on the rules of the new orthography, the Ministry for Economic Development, Trade and Agriculture officially allowed the use of feminitives for any position in its categorization of professions. In 2021, Ukraine's President Volodymyr Zelenskyy signed a law amending the name of the “Day of Defenders of Ukraine” («День захисника України») into the “Day of the Defenders and She-Defenders of Ukraine” («День захисника і захисниць України»). This is the only case in which feminitives have been introduced into the name of any official celebration in Ukraine.

According to a survey by the Institute of Mass Information, 63 percent of Ukrainian journalists constantly use feminitives in their media content. Another 15 percent noted that there is no strong request by their editors to use feminitives, while 12 percent said that not all professions allow for the formation of a feminitive. And only four percent mentioned that they use no feminitive at all in their content.

Why are some Ukrainians opposed to feminitives?

Dr. Olena Masalitina lists three reasons why some people categorically refuse to use feminitives. First, a person might not be familiar with feminitives, or they might be a Russophone. Russian has fewer feminitives and suffixes allowing the creation of feminine forms, thus, when this person speaks Ukrainian, they might might feel that the presence of so many feminitives sounds artificial or unusual. According to sociological surveys conducted by the group Rating, 51 percent of Ukrainians speak Ukrainian in daily life, at work and at home, while 36 percent speak both Ukrainian and Russian, and, 13 percent, solely Russian.

Second, very often, women themselves do not want to be addressed with feminitives, as they think that it represents a form of discrimination, says Dr. Masalitina: “If we look in the Ukrainian dictionary, we will see that there are half as many masculinities as feminitives. Of course, it becomes clear that society has despised women for several centuries. And it remains because not so much time has passed since women won the same rights as men. And such a reaction is only an undeniable confirmation that we live in a patriarchal world. However, if a woman is uncomfortable when they specifically talk about her with the use of feminine terms, then there is no need to force or be indignant. It is worth respecting her position, giving her the right to decide for herself.”

Finally, some people love to be controversial, and the issue of feminitives is definitely ideal for that.