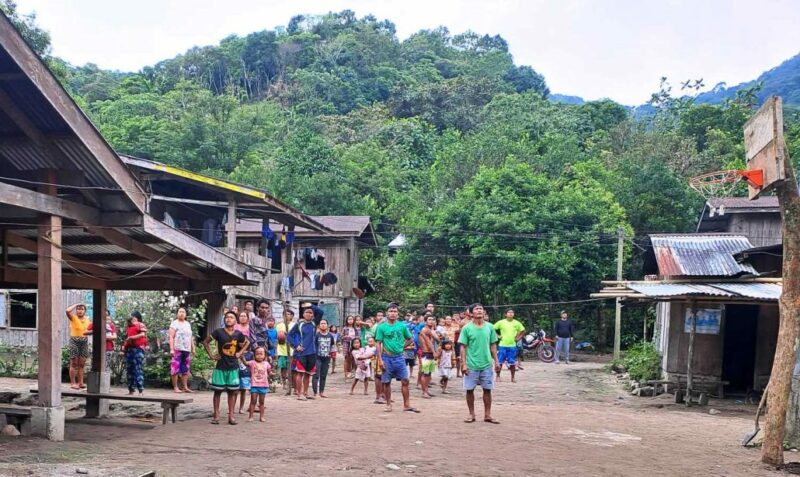 This article [2] by Raymund B. Villanueva was originally published on Kodao, an independent news site in the Philippines. An edited version is republished on Global Voices as part of a content-sharing agreement. This story was produced with support from Internews’ Earth Journalism Network.

Upper Katablangan in Conner, Apayao province, has enjoyed nearly 20 years of uninterrupted power supply from the community’s micro-hydro project. Apayao is part of the mountainous Cordillera region in the northern Philippines. Located 20 kilometers from its nearest neighboring barangay [3], a local center of government, it can only be reached by an eight-hour trek up a perilous foot trail when it is rainy, or two hours on expertly-driven motorcycles when the road is dry enough. It was one of the first barangays in Abra, Kalinga, and Apayao provinces to build a micro-hydro power plant for electricity [1], a vital service that is often taken for granted in lowland communities.

It took the Indigenous Isnegs of Katablangan six years to build the project. But constructing a plant is one thing — keeping it dependably running is another. Maintaining a 7.5-kilowatt power plant where destructive typhoons often wreak havoc on lives and property, where replacement parts are hard to purchase and deliver, and where engineers from the Sibol ng Agham at Teknolohiya (SIBAT, their project partner) usually take weeks to reach for repairs, is hard. Katablangan falls into darkness during these repair windows, save for old-fashioned kerosene lamps.

Their dam is cleaned regularly to prevent twigs and leaves from clogging the pipes that supply the water to the power station. If twigs and leaves keep going into the equipment, the blades may be damaged earlier. The station’s location close to the household also allows them to immediately shut the machines down if trouble arises.

“We try our best to keep the equipment in good condition. The children do not like power outages while we watch our favorite television shows,” village elder Dalmacio “Dalma” Luguyan said laughingly.

The Katablangan mini-power station only had three breakdowns and major equipment replacements in its two decades of operation. “Our equipment has an average lifespan of six or seven years,” Dalma explained, adding it usually takes weeks for replacement machines to arrive.

Each replacement part is usually newer and better quality. SIBAT engineers periodically return to install safety equipment such as lightning arresters and voltage regulators to keep the power supply stable. Power belts and wiring have to be regularly replaced and upgraded as well. Last April, a bigger voltage regulator was installed at the power station that allows for a more stable 220-volt supply, which is often used in construction, like when carpenters use power tools. 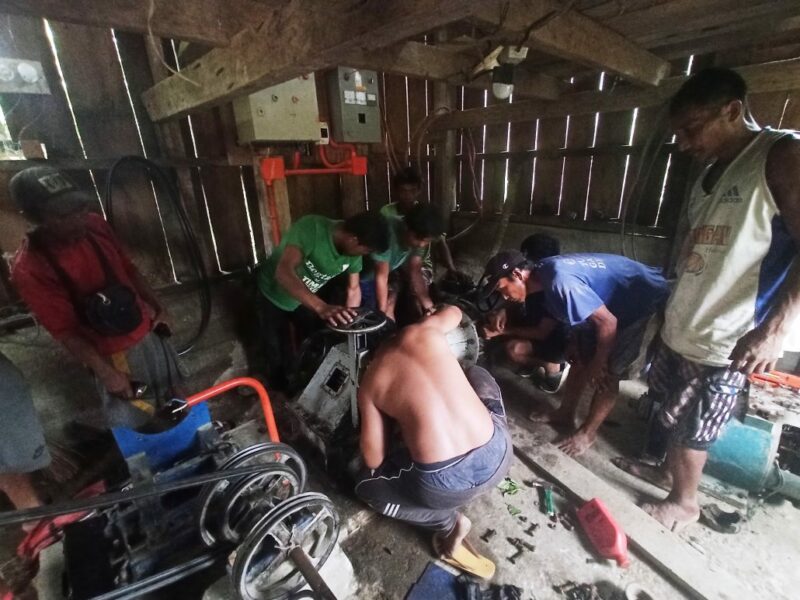 A large part of northern Cordillera is still off-grid in terms of power connectivity from electric cooperatives. Government energy agencies are trying to determine how many households and communities are lacking power connectivity — though current estimates say 15 million Filipinos still do not have electricity in their homes.

Electrification is a moving target of sorts because the census (done every five years) presents a bigger number of households that need to be connected to electricity providers.

There are many areas that could not be easily connected to the Luzon or Visayas energy grids and have to generate their electricity from fossil fuel power plants. Consequently, interior communities are the last on the list in electricity connection projects.

Nonetheless, the engineer said that independent and micro renewable energy initiatives such as micro hydropower, solar, wind, and biomass power generators are slowly becoming popular, albeit they are still regarded as less profitable for power-generators compared to fossil fuel-driven generators. 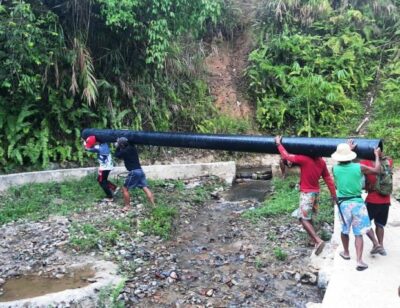 Residents carrying HDPE pipes to Katablangan that help channel water from their dam to the generators. Photo [1] by Engineer Jaymart Erasquin/Sibol ng Agham at Teknolohiya)

Church groups under the One Faith, One Nation, One Voice [4] (OFONOV)-Cordillera Chapter support such projects that make “judicious use of the environment” as opposed to what it calls development aggression brought by the government’s construction of massive dams on the Chico River system and its tributaries. According to the OFONOV, there are five dam projects in Abra province, six in Apayao province (four of which are pending), and 11 in Kalinga province (two of which are pending). These are part of the 77 hydroelectric projects in the entire Cordillera Administrative Region, 66 of which have been completed. 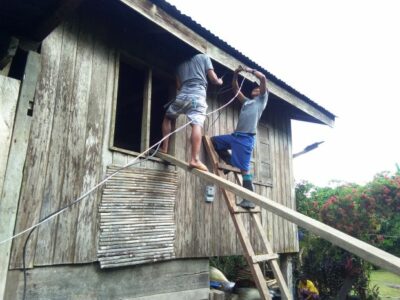 A Katablangan home is retrofitted with newer wires and an electricity meter as part of a maintenance activity. Photo [1] by Engineer Jaymart Erasquin/Sibol ng Agham at Teknolohiya)

While the electricity projects from the government, foreign entities, and corporations have historically drawn criticism, Katablangan’s micro-hydro power project has drawn support and gratitude from its residents.

Due to Katablangan’s remoteness, its residents can't access free broadcast television, but because of the electricity project, all of its houses sport satellite dishes on their roofs that offer them other channels to watch. While no mobile phone service reaches the community, all of its households now have several radio sets to order items from the village stores or chat with their neighbors. The power station also houses a rice and corn mill, liberating the residents from the backbreaking task and affording them more free time for other activities.

Here in Conner, we have the unique phenomenon of lowlanders making the eight-hour trek up to our village to have their mobile phones, flashlights, radio sets, batteries and other gadgets recharged after strong typhoons have damaged their [on grid] power supply lines. Why is that? Because what we have here is a more reliable power supply that is cheaper and cleaner.

SIBAT executive director Estrella Catarata said that from the initial 42 households, the Katablangan micro-hydro electricity project has since expanded to Sitio Battong three kilometers away, increasing the number of serviced households to more than 60. They have also since revised their original billing of PHP 50 per month (roughly USD 1) per household to PHP 10 per kWh, in order to save funds for independent maintenance and upgrades. Catarata also reported that the new refrigerator and freezer at Katablangan’s stores are now able to serve items such as ice, ice cream, ice candies, ice-cold soft drinks, and frozen food. Catarata added:

The Katablangan project is a story of the Cordillera’s abundant source of renewable energy that is harnessed by culturally-sensitive and appropriate technology for the benefit of its people. Its benefits only serve small and remote communities for now but there are many communities in need of electricity. The beauty in this is that it does no harm to the environment that the Indigenous peoples still regard as sacred.

Because of Upper Katablangan’s success with its renewable energy project, the people of Lower Katablangan have recently started digging for dams and canals for two micro-hydro power plants of their own. 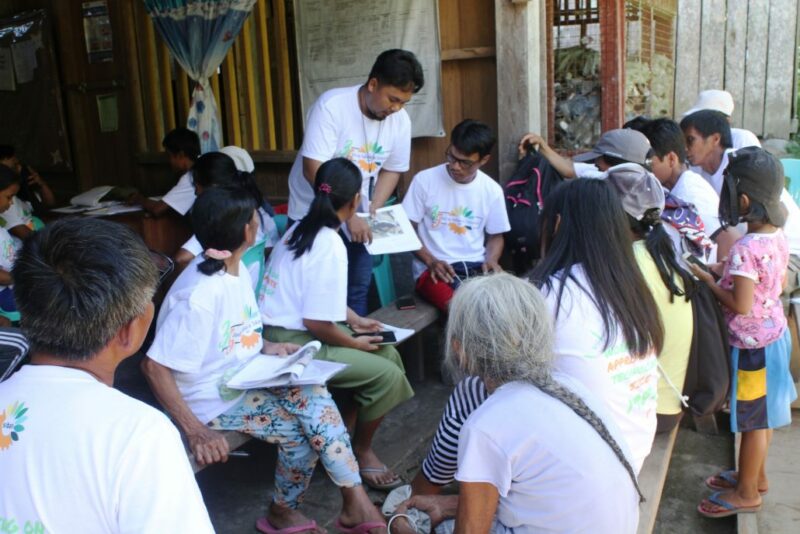