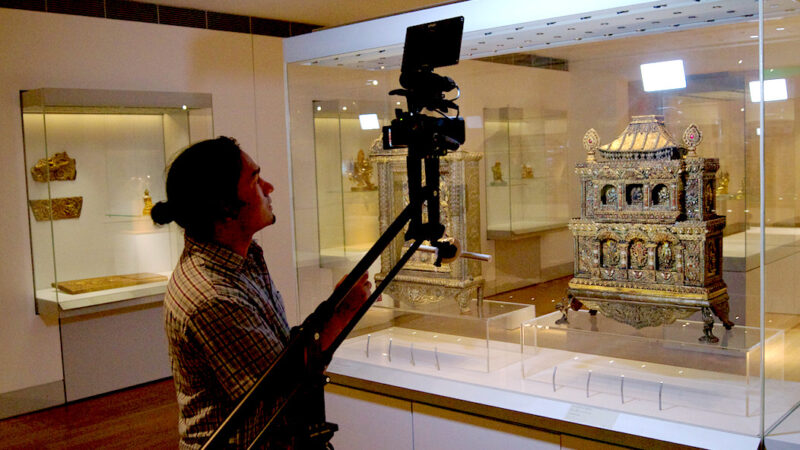 Image by Deepak Tolange via Nepali Times. Used with permission.

This article by Ashish Dhakal was first published in Nepali Times. An edited version is republished on Global Voices as part of a content-sharing agreement.

When Kathmandu-based filmmaker Deepak Tolange visited the Museum of Asian Art in Berlin seven years ago, he sought out the collection from Nepal (pictured above). It was a large section around the corner from the Tibetan artefacts on the same floor.

Among the items was an ornate 70.5-cm-tall two-storeyed Buddhist shrine richly decorated, inlaid with precious stones, gold and silver. Three standing bodhisattvas were placed in niches on the lower level, and there were three other deities inside the upper chamber.

The object represented elements of Newa (or Newar) architecture: the torans (doors), the iconographies, and the jala nhyaka (a small mirror), but the roof had Tibetan touches. And, upon inspection, Tolange noticed traces of vermilion and saffron powder on the idols, indicative of continued worship.

The Nepali in him was intrigued, Tolange wondered if the antique shrine was stolen from a temple in Kathmandu valley like many others have been.

The first historical account of a religious object stolen from Nepal is from 1765, when the statue of Narayan disappeared from the Bhagwati temple in Hanuman Dhoka. Plunder peaked in the 1960s, as Nepal started to open up to the outside world. Today, after campaigning by citizen groups and the government, foreign museums and collections are repatriating stolen deities. According to the Department of Archaeology (DoA), in the past decades, 93 religious objects have been returned, of which as many as 19″ have been repatriated since July.

Back in Berlin, Tolange reached out to Bernadette Broeskamp, a researcher of East Asian and Buddhist art at Freie Universität Berlin. Based on his findings, Tolange made a 6-minute short film titled “Buddhist Shrine.”

“I thought that maybe, if it was indeed stolen, it would be possible to return the shrine to Nepal,” Tolange recalls.

The museum dates the ritual object to the 19th century. The provenance record shows that it was sold to the museum in 1936 by one Karl Meinhart, but beyond that nothing is known. Tolange speculates that, because the war was brewing in Europe at the time, Meinhart might have been in need of money, which prompted him to sell the object to the museum.

There are no other documents, which were either never kept or subsequently lost during the war. The only thing certain is that Meinhart told the museum that the object was indeed from Nepal.

The short film was shown at the museum in 2015, where it was received well. “The Q&A after the screening was very heated,” recalls Tolange. “Everyone wanted to know if the object was really stolen and, if yes, then would it be returned.” The question remained unanswered. 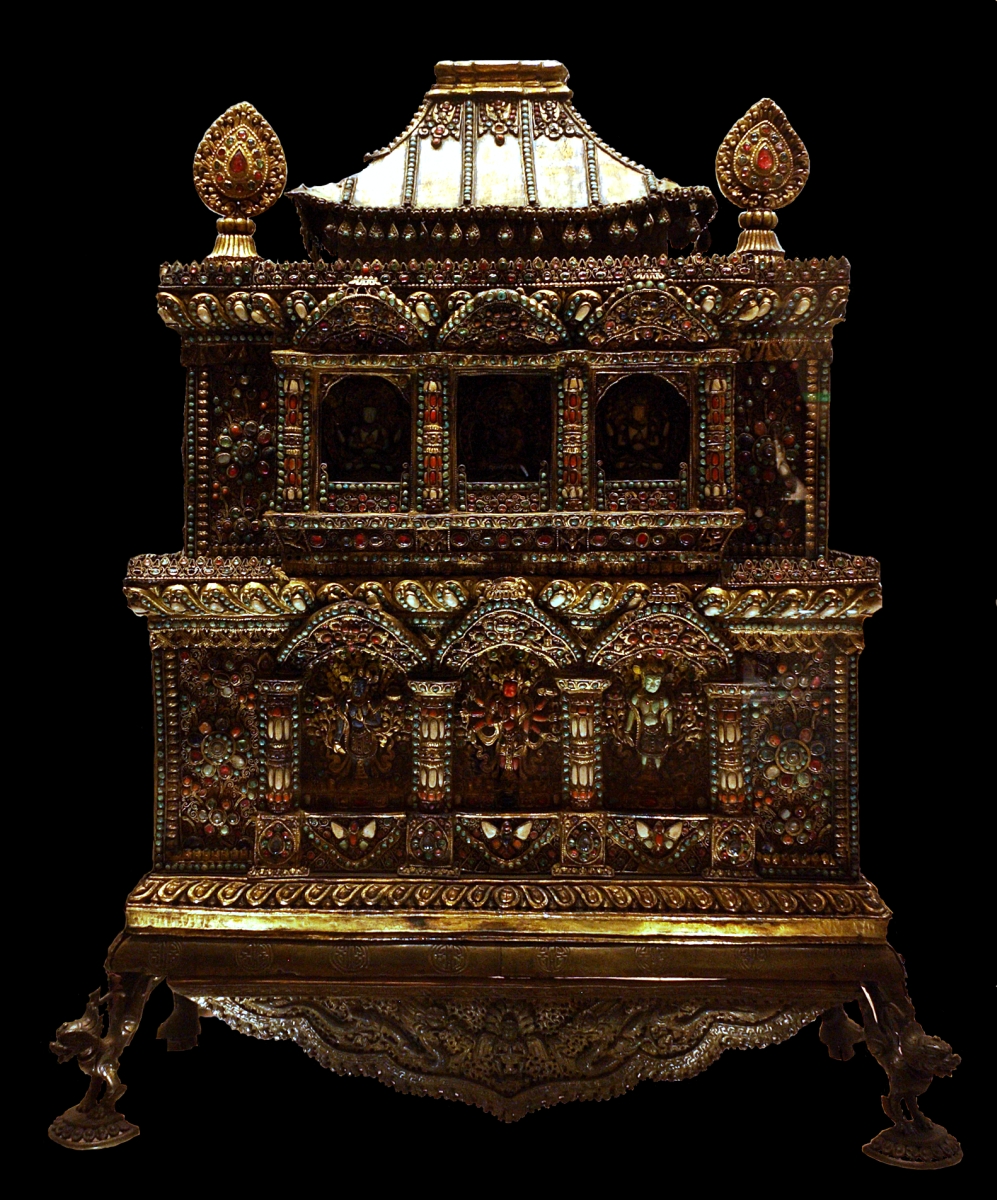 The Buddhist altar at the Museum of Asian Art. Image by Susana Schulz via Nepali Times. Used with permission.

Tolange returned to Nepal for three months in 2016 for a field visit as part of his master's study. He had been thinking about the altar, wondering if there was a bigger story behind it.

He went to Patan to meet Bhim Ratna Shakya, a senior sculpture artist, who recalled that his father had made six altars like the one in Berlin. That was a significant clue, and Tolange spoke with historians Satya Mohan Joshi, Sukra Sagar Shrestha, Mukunda Raj Aryal, Kathmandu Valley Preservation Trust (KVPT)’s Rohit Ranjitkar and went to Boudha to meet the Buddhist monk S. Dharmacharya.

The conversations shed more light on stolen artefacts, even though he did not get a substantial lead on the shrine in the Berlin museum. “I found out that these shrines, or altars, were often for private use,” Tolange says. “And people in Mangal Bazar [in Kathmandu] continue to make them.”

But the artisans still do not sign their names on the pieces, and that makes it difficult to track them down. “On top of this, when the dealers sell the altars, they sell it at the value of an art object — while the artisans are paid only the rate of the labourer,” he adds. “Artists do not always get the recognition they deserve, and this practice is ongoing.”

Upon graduation, Tolange proposed to the museum that he would add the Nepali side of the story and make another film with the new findings, this time a little longer and more detailed. Titled “Buddhist Altar,” the 16-minute film was completed in 2022 after much research.

After COVID-19 restrictions were lifted, Tolange visited Khenpo Gyaltsen from Rangjung Yeshe Institute and Loponma Ani Phuntsok Wongmo from Hasantar Nunnery. He also went to Buddhist temples and observed traditional rituals at the Golden Temple in Patan, Swayambhu, Boudha and other monasteries in Kathmandu.

Other deities in the shrine depend on the people and the families. In fact, as Bhim Ratna Shakya remarked in the film, any god can go into the chambers.

Historians are convinced that the person who crafted the Buddhist shrine in the Berlin museum was a Newa (Newar), possibly from Patan, although there is still some doubt regarding where it was actually made, since there are Tibetan influences on it as well. Historically, these shrines were commissioned by families for their use, and the one in Berlin was commissioned too, most likely by Meinhart himself.

In the film, which is first and foremost about a quest, Tolange has tried to trace the craft behind the shrine, digging into its past and current practices. Intercut with images of the mountains, the hills and the temples, he also focuses on the religious syncretism in Kathmandu Valley to contextualize the artefact as still being a part of a living culture.

The film has been selected for the permanent collection at the Humboldt Forum, where it is scheduled to be screened next to the shrine itself to mark the inauguration of the Asian section of the Berlin-based centre on 16 September.

Tolange also plans to show the film to the Nepali audience. He says, “Working on the film helped me rediscover my country and its cultures. If I hadn’t done it, I’d have known nothing about the object and its importance.”