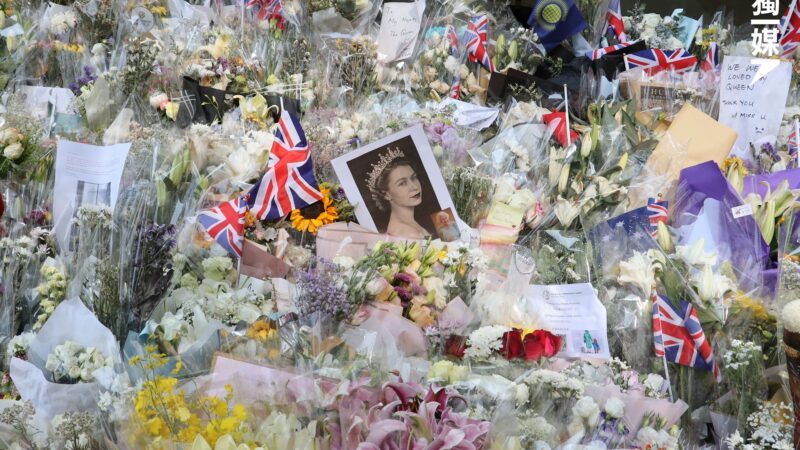 Image via inmediahk.net. Used with permission.

Thousands of Hongkongers queued outside the British Consulate-General's office on September 10th and 11th to pay tribute to the late Queen Elizabeth II who passed away on September 8, 2022.

Hong Kong was under British colonial rule for more than 150 years, from 1841 after the First Opium War [2] between Britain and Qing Dynasty until July 1, 1997, when the city’s sovereignty was handed over to the People's Republic of China.

The news about the death of the 96-year-old Queen triggered strong emotional reactions on Hong Kong social media over the weekend. September 12 was a public holiday to celebrate the Chinese Mid-Autumn Festival, but instead, thousands of Hongkongers flocked to offer flowers and place condolence messages outside the British Consulate-General.

Easily hundreds, maybe over 1,000 in queue now outside the British consulate in Hong Kong waiting in sweltering, stuffy heat to dedicate flowers to late Queen Elizabeth II. The consulate estimated waiting time to be 2-3 hours. pic.twitter.com/4KvAshuv3C [3]

By evening, the British Consulate was surrounded by a sea of flowers:

Mourners continue to pay tribute at Hong Kong’s British Consulate after dark on Monday, after crowds queued for hours to sign a book of condolence for the late Queen Elizabeth. pic.twitter.com/QfSULDVG2V [5]

Some pro-Beijingers were upset about Hongkongers’ praise of the late British Queen, accusing them of whitewashing [7] the repressive nature of the city’s colonial history.

Several pro-China commentators, such as @qiaocollective, hence highlighted the police's violent crackdown on the 1967 riots to remind people about the dark side of the city's colonial history:

In 1967, British colonial police in Hong Kong brutally suppressed Chinese protests, led by left-wing groups with ties to the CPC. At least 22 people were killed by the police.

In 1967 [10], against the backdrop of the Cultural Revolution in mainland China [11], organisations and groups affiliated with the Chinese Communist Party attempted to “liberate” Hong Kong by mobilising large-scale protests against the British colonial governments in the city.

The police responded with violent crackdowns, and the protests eventually escalated into street bombing attacks. Among the 51 causalities [10], at least 22 were killed by the police and 15 civilians, including two children, died in bomb attacks. Nine police officers died in the riots.

Indeed, after the 1967 riots, the colonial government stopped using the Sedition Law to repress government critics, and it fell into obscurity. Ironically, in the aftermath of the 2019 anti-China extradition protests, the colonial relic was resurrected to punish dissents in Hong Kong, as exemplified in the sedition charges of Stand News staff members [12] in 2021. The most recent case is the sentencing of five to 19-month imprisonment for a set of children’s books:

While the violent crackdown of protesters in the 1960s represents the dark side of the British colonial legacy, it has found its successor in current Hong Kong.

The British colonial history, however, is more than its repressive political system. After the 1967 riots, the British government introduced a series of social reforms to the city. In fact, Queen Elizabeth’s first visit to Hong Kong in 1975 symbolised the transformation of the colonial regime from repressive to benevolent. The late Queen’s itinerary on this visit was carefully designed to connect with grassroots campaigns and remake the image of the colonial government.

One of her stops was Oi Man Estate (愛民邨), a public housing compound completed in 1975. The Chinese name of the estate means “Love the People”:

Many Hongkongers still remember the Queen for her support of grassroots organizations during her first visit. The Majesty's wet market tour in 1975 has been widely circulated during the weekend in response to her death:

The Queen's first visit to Hong Kong in May 1975. Years went on, and people still talked about it.
May she rest in peace. pic.twitter.com/7En28IAl5C [17]

As most protesters in the 1967 riots were young people, the colonial government introduced a new social policy to prevent delinquency by providing the poor with more opportunities for social mobility. In addition to strengthening the social service sector, the government introduced the six-year free and compulsory education in 1971 and extended it further to nine years in 1978.

The social policy restored peace in the city. By 1975, the Queen was confident in meeting with young people without fear:

The Queen and HRH Prince Philip visited the University of Hong Kong in 1975 as our Patrons. Their legacy will always be part of our institutional history and kept in our University Archives. pic.twitter.com/k1VyaGWkkN [19]

The authoritarian image of “Her Majesty” was transformed into the image of “Old Lady Boss” — a title that local people attribute to the Queen, reflecting her reputation as a soft and considerate monarch within the city, as pointed out by ex-Hong Kong lawyer-activist @kevinkfyam:

Queen Elizabeth II has redefined the role of a constitutional monarch for the modern and post-modern world. For #HongKong [21] people, she represented a simpler, more free era for the city, known affectionately as “事頭婆” (roughly “Old Lady Boss”). RIP.

Many born amid decade-long social reform in the 1970s firmly believed that Hong Kong’s economic success could be attributed to the colonial ruler. Herbert Chow, a well-known businessman who recently left the city for the UK is among them:

As a witness of the British monarchy since 1964, and the Chinese leadership since 1997, I cannot but think where Hong Kong would be today in the global arena if Britain had not run Hong Kong for the 150 years prior to 1997!

May the Queen of all true HongKongers rest in peace💛 pic.twitter.com/HhzDUwr8sZ [23]

The nostalgia of the British colonial era

Many have noticed nostalgic sentiments percolating as citizens mourn the Queen and interpreted this as an act of protest against the suppression of civil society in Hong Kong. Independent journalist Timothy McLaughin noted:

NowTV broadcast from last night in Hong Kong paused and zoomed in on this note left outside the British consulate. A touch of protest while mourning the Queen. pic.twitter.com/HiVmb0fH1F [25]

Political cartoonist @badiucao interpreted the meaning behind collective mourning in a drawing:

The flowers for the Queen in Hong Kong is more than just mourning. It is also a silent protest against China‘s reunification and oppression.#QueenElizabethII [29] pic.twitter.com/aNsaDEcI0T [30]