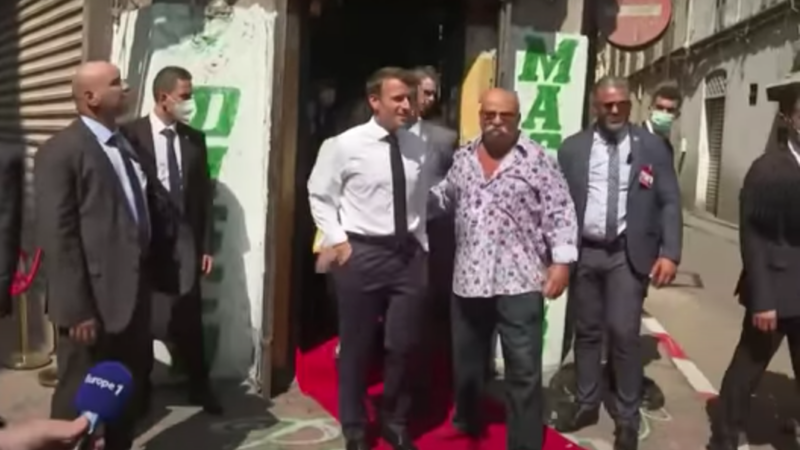 French President Emmanuel Macron standing with Boualem Benhaoua the owner of Disco Maghreb at his studio Disco Maghreb. Algeria's city of Oran, 27 August 2022. Screenshot from a video by AFP. Fair use.

On August 29, French President Emmanuel Macron concluded his three-day visit to Algeria with a historic stopover in the city of Oran, during which he visited the fortress and the Church of Santa Cruz, two of the country's most significant Christian landmarks. Then he headed to Disco Magreb, a renowned music record shop seen as the home of well-known Algerian raï music. After nearly two years of cold relations between the two countries, Macron’s stop was intended to win over the hearts of the Algerian youth.

It appears that Macron is aware of rai music. He is seen carrying a cassette for Cheb Hasni while in Disco Maghreb. Cheb Hasni was assassinated by two masked assailants in 1994 at the height of his stardom and youth, shocking Algerians.

Emmanuel Macron photographed with a legendary Cheb Hasni cassette, it's too crazy

Disco Maghreb has an interesting story. Despite being one of the greatest brands where icons of the Algerian rai world, such Cheb Khaled, Cheb Mami and Cheb Hasni recorded songs, it closed its doors nearly 20 years ago.

Disco Maghreb, however had not drawn its last breath yet — quite the contrary, it was reborn after Franco-Algerian artist DJ snake released a music video called Disco Maghreb, that used a mix of chaoui, Al-Nayli, Al-Qasbah, and Al-Rai rhythms. The video pays tribute to Snake’s Algerian roots — his mother is Algerian.

The artist explained in a tweet that he imagined Disco Maghreb to be “a bridge between different generations and origins, linking North Africa, the Arab world and beyond.

Since its upload on YouTube on May 31, the video has garnered nearly 86 million views, and that number is still growing.

A warm official welcome but an indignant public reception

In his journey, Macron aimed to focus on the future while also revitalizing bilateral cooperation and partnership. For his part, Algerian President Abdelmadjid Tebboune welcomed the “positive dynamic” in the relationship between the two countries and emphasized the promising prospects for their special partnership.

The Algerian people had a different opinion despite the warm official reception and the widely celebrated stopover at Disco Maghreb. Hundreds of Algerians gathered around Macron’s car in Oran, shouting insults, slogans like “one, two, three…viva l'Algérie” (long live Algeria), and accusations that Macron only cares about Algerian gas.

Macron apparently misunderstood the message, and returned a cheery hand gesture to express his gratitude, after which he had to cut short his impromptu walkabout.

The episode was captured on video, and went viral:

Our people in Oran received the French president, Emmanuel Macron with this slogan “Vive l'Algerie”. We don’t have anyone to kiss his hand and other parts.

This caricature summed up the stopover at Disco Maghreb and the reaction to it:

Cheb #Macron was in Oran on Saturday to visit a Christian shrine and the legendary #Raï Disco Maghreb store. The president tried his luck on an impromptu walkabout, which was cut short for security reasons. Decidedly, Algeria and France, what a beautiful love story.

“Cheb Macron” became the center of mockery by the Algerian youth soon after.

Brilliantly, Algerians have responded with a series of memes to mark the occasion. This one renders the French president into the raï personality Cheb Macron (“released” by Disco-Maghreb) in which he sings of the beauty of Arzew, the site of an oil refinery. 10/10 pic.twitter.com/eigTU3GZrb

He left you a president and returned to you as “Cheb Macron.” You must be proud.

Macron's indignant reception by the Algerian people is not at all surprising. From the popular Algerian perspective, France’s relationship with Algeria is not the “love story” that Macron described during his visit. It is more accurately described as tiresome, and thorny, tainted by an atrocious 132-year history of colonization that culminated in an eight-year brutal revolution, which the region unflinchingly refers to as the revolution of 1.5 million martyrs. In 1962, Algeria snatched its independence from the French.

Algerian influencer PIC, expressed displeasure following Macron’s statements when he described Algeria’s relationship with France as “a love story that has its share of tragedies:”

After Algeria gained its independence, Macron was the first French president to come close to acknowledging the French colonization of Algeria, and the brutal methods France used to suppress the revolutions. During a visit to Algeria in February 2017, he denounced colonialism as a “crime against humanity.”

He went a step farther. On July 24, 2020, he commissioned historian Benjamin Stora, who was born in Algeria to submit a report to “commemorate colonization and the Algerian War.” The Elysee, however, refused to apologize for the occupation of Algeria or the bloody war that ended French rule after receiving the report in January 2021. The decision sparked criticism on the streets of Algeria, even as the Algerian government kept silent.

A few months later, in October 2021, a political storm led to a straining of ties between the two countries. It followed statements by Macron in which he questioned whether there had been an Algerian nation prior to the French colonial rule, and stated that the Algerian “political-military system” rewrote the history of France's colonialism based on “a grudge against France.”

These statements coincided with France's celebration of the “harki,” the Algerians who fought in the French army to suppress the Algerian revolutionaries. In addition, France decided to reduce the number of visas granted to people from Algeria, Morocco and Tunisia.

The response of the Algerian authorities at the time was immediate and firm: Algeria banned French planes from using its airspace, reduced trade exchanges, and summoned the French ambassador to Algeria, forcing Macron to finally extend a hand of peace in order to calm things down, but without an official apology.

An ode to Algerian gas

The most recent visit, and the attempts to win the favor of the Algerian people, indicate that there has been a change in Macron's position on Algeria. His condescending attitude changed to a strong desire to improve relations between the two countries, in the face of a long and harsh winter awaiting Europe, following Russia’s decision to cut off gas, in retaliation for sanctions against its invasion of Ukraine.

Macron's office insisted that Algerian gas was not a priority on the visit's agenda; still, the head of the French energy firm Engie, Catherine MacGregor, was on the French delegation. Energy expert Jeff Porter of North Africa Risk Consulting said Macron's trip had at least two goals: “Feeling out Algeria's energy sector stability and potential additional export capacity… and trying to woo Algiers away from some of its other diplomatic relationships,” including Russia and China.

Algérie Black Liste summed up the goals of Macron’s visit to Algeria with a caricature of a cassette tape bearing the image of Cheb Macron. The list of songs include: “Harsh winter,” “Give me a lighter,” Russia did not turn around,” and “The gas went to my head,” among others.