For some it is revolutionary, while others are more suspicious 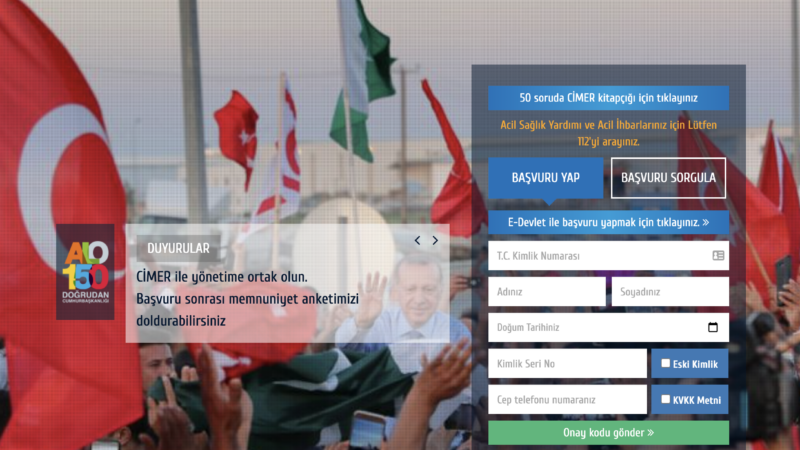 A screenshot of CIMER's homepage.

In Turkey CIMER, short for Cumhurbaşkanlığı İletişim Merkezi or Presidency’s Communication Centre was set up in 2015 as part of the ruling Justice and Development Party’s efforts to help citizens communicate their “problems, complaints and requests” to the presidency. However, some have security concerns about the site and claim it has been misused to target social and political dissidents.

When it was first released, Fahrettin Altun, the Director of Communications, said the center was established by President Recep Tayyip Erdoğan “to provide the quickest, and most effective response to requests, complaints, and applications for information from the public.” Daily Sabah wrote in its piece hailing the application as “an extension of President Recep Tayyip Erdoğan's image as a man of the people, which helped him win multiple elections.”

CIMER's predecessor was BIMER (Başbakanlık İletişim Merkezi), or the Prime Minister's Communication Center. It was set up in 2006 during Erdoğan's premiership. According to journalist Nevsin Mengu, BIMER served as a service for citizens “to file complaints about state institutions, services, and other citizens, or pretty much anything they saw unfit.” A year after Erdoğan was elected president for the first time, in 2014, BIMER was combined with CIMER.

It is not clear what happened to personal data and entries already within the BIMER's database. BIMER's website is no longer accessible to the public.

For some, like Altun, CIMER is a “revolution” and “the world's most commendable example of participatory democracy,” for others, the platform's incentives and goals raise questions. The center “has turned into a platform where critics and people whose lifestyles are disapproved of by the ruling party supporters are reported,” wrote one website in January 2022.

“One of the phrases that have been included in the Turkish lexicon in recent years is ‘I will report you to CİMER.’ This expression, which is frequently used, especially for opponents of the government, did not come into being for no reason.”

In September 2021, a newly appointed doctor to one of the public hospitals in Istanbul, Larin Kayataş, was suspended after a nurse working at the same hospital filed a complaint against her on the grounds of “disturbing public morality.” Kayataş is a trans woman, according to media reports.

For Mengu, CIMER's existence and the sheer number of entries the platform gets is indicative of “the current state of affairs in Turkey.”

Nobody but the [presidential] palace has the practical authority to make a decision and take action.

These concerns range from minor issues like a complaint about behavior and public facilities to personal and domestic disputes and targeted reports against marginalized individuals.

In 2020, a woman requested that CIMER help her patch things up between her grandparents. The regional governor got involved and, according to reporting by Gazete Duvar, was successful.

A more recent example includes an investigation launched by the Istanbul Chief Public Prosecutor's Office against the music streaming platform Spotify.  The Office claimed the music streaming platform approved playlists that were “insulting religious values and state officials.” According to reports, the decision to launch the probe came after “CIMER received a large volume of complaints that the playlists were fostering Islamophobia by insulting religious values and state officials.”

In July, opposition party member Tacettin Bayir sent an inquiry through CIMER requesting information on the alleged number of burned mosques and their locations, the ruling Justice and Development Party leader claimed the 2013 Gezi park protesters damaged. “There are no documents or reports from the provinces regarding the incidents in question,” read the report Bayir received in response.

According to CIMER's user guide, there are several ways to file a complaint — electronically, through the e-government system, by telephone, fax, or an in-person application. None of the options offer an anonymous application. The online platform requires personal information that ranges from national ID, name and last name, address, mobile number, and email. The applicant is offered the choice of not selecting their education status. In August, CIMER announced it was offering its services to hearing and speech impaired users.

According to the most recent data, CIMER received 6.1 million applications in 2021. These included opinions, requests for information, complaints, suggestions and gratitude expressed for the activities carried out by the state.

Of these applications, 5.5 million were apparently addressed.

At the end of the day, CIMER's true intentions and purpose remain opaque. If anything, the platform's existence and use highlight several social shortcomings — lack of trust in local institutions and mechanisms and the belief that the presidency can solve whatever problem there is; lack of trust among citizens as they file complaints against each other; and a source of information, where queries can highlight divisive political statements and grievances.