Russian malign influence has been blamed for homophobic protests 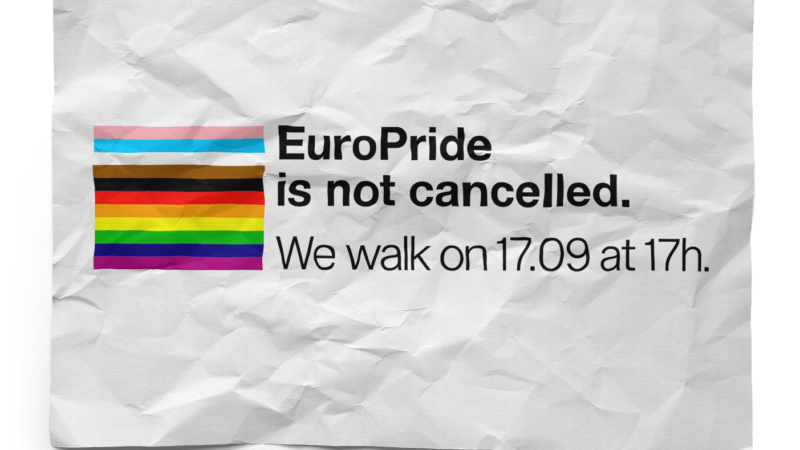 Graphic from the EuroPride 2022 website announcing that the event in Belgrade, Serbia has not been canceled.

This story is based on original coverage by Meta.mk, as part of the regional initiative Western Balkans Anti-Disinformation Hub. An edited version is republished here under a content-sharing agreement between Global Voices and the Metamorphosis Foundation.

EuroPride is a pan-European international LGBTQ+ event hosted by a different a European city every year. In 2022 it is scheduled to take plac place in Belgrade from September 12–18 and includes a film festival, conferences, and a Pride Walk. Serbian far-right political parties and the Serbian Orthodox Church have condemned the event, calling for it to be banned.

The Serbian public sphere has been flooded with homophobic hate speech and disinformation, while opponents of the EuroPride have staged massive protests against the manifestation. On August 27, the president of Serbia, Aleksandar Vučić, announced that the event would be “canceled” in order to reduce political tensions and to protect participants from possible physical violence.

After the official statement that the EuroPride 2022 street walk would be cancelled, the organizers responded that the state cannot “cancel” the event because its not its organizer. Goran Miletić, the coordinator of EuroPride 2022, explained in a statement published their website:

The state, namely the police, can only ban EuroPride, not cancel it. That kind of decision would be against the Constitution and the Constitutional Court had already revoked similar decisions in 2009, 2010, 2011 and 2012. Events held in closed venues that are planned for EuroPride 2022 cannot be forbidden. We are waiting for the official decision to which we will issue an appeal.

EuroPride and the tensions with Kosovo were the main issues  discussed at the session of the National Security Council convened by President Vučić on September 10. Right after, Miletić stated for N1 TV that state institutions have no legal grounds to ban the Pride Walk and that it will take place regardless;  moreover the state has responsibility to protect the participants from any violence.

Deadline for to issue formal ban ends on Tuesday at 4 p.m., 96 hours before the start of the walk scheduled for September 17. Our legal team is ready to submit complaints to the Ministry of Interior (MUP) and the Administrative Court in case MUP bans the gathering…

A massive protest event that combined a religious procession and protest walk called “Litany for the salvation of Serbia” was held in Belgrade on Sunday, August 28. The anti-EuroPride event started with  Serbian Orthodox Church officials leading the protesters in prayer. Then they all marched through the city carrying church icons and photographs of Russian President Vladimir Putin, led by the motorcade of the Night Wolves motorcycle club, N1 TV reported.

Bishop Nikanor of Banat from the Serbian Orthodox church addressed the people who took part in the litany, citing Putin’s views of the LGBTQ+ community. He called Putin “today’s Tsar of Planet Earth” who has made a firm stance against the “anomalies” that have arisen in Serbia. After reciting prayers, the participants walked across the streets of Belgrade and headed toward Saint Sava Orthodox Cathedral.

Serbian Night Wolves are part of a network of motorcycle “clubs” founded in Russia with direct support of from Putin's government, spreading messages promoting Russian imperialist interests and propaganda that presents authoritarian regimes as  protectors of traditional values allegedly endangered by Western liberal corruption. In the Western Balkans they have been involved in activities undermining democracy in Serbia, Bosnia and North Macedonia. Since July 2022, the Russian organization that has modeled Night Wolves is subject to EU sanctions.

Ana Brnabić, the prime minister of Serbia, is one of the few openly LGBTQ+ persons in the country. She noted that the state doesn’t want to violate anyone’s rights guaranteed by the constitution, yet pointed out at the possible consequences for Serbia of hosting staging the 2022 EuroPride, as the Serbian TV station N1 informs. She said:

It is more of a plea than an order: “Don’t walk.” It is in accordance with the constitution, but another issue is what will be the consequences for our country. The issue is: what is possible at this moment, and how are we to preserve our stability? I’m sorry for the situation, but for us this September is like a “perfect storm.” There is a foreign factor in this, that is very happy that we have this situation.”

Danas daily newspaper reported that Serbian political analyst Dušan Janjić commented on Serbian Prva TV that the presence of the Night Wolves Motorcycle club at the August 28 protest against the EuroPride indicates that the Russian military intelligence service GRU was behind them.

He also said that the war in Ukraine and its consequences are an opportunity for Serbia get rid of Kremlin influence by “correcting” its foreign policy and its dependence on Russia’s energy exports. He implied that, in order to prevent the pro-EU turn, pro-Kremlin forces instigate internal conflicts by supporting divisive events like the litany procession.

In 2020, similar clerical protests instigated by the Serbian Orthodox Church led to downfall of the pro-European Union government in Montenegro.

Homophobic protests similar to those in Belgrade also took place in other Serbian cities, and are widely viewed as a boost for more radical right-wing opposition parties. While sharing similar Serbian nationalist ideology with the government of Vučić's Serbian Progressive Party (SNS), those parties want to replace his administration by targeting the traditional conservative voting body with more extremist rhetoric.

The Serbian government has indeed been balancing its act between its aim to join the European Union, and its policy of maintaining “a traditional alliance” with Russia. There has been noticeable tension: in late August, Vice President Zorana Mihajlović said that Russian Foreign Minister Sergei Lavrov had manipulated the fact that Serbia didn’t impose any sanctions on Russia, and misrepresented this decision as Serbia taking sides against Ukraine.

As reported by N1, the Russian Ministry of Foreign Affairs told Mihajlović she wasn’t well acquainted with the reality of the relations between both countries, declaring:  “We have a complete mutual understanding with Serbia about current issues in the international agenda.”

Meanwhile social media users have been sharing videos from an event in support of “family values” in Serbia that was held in Moscow.

Protest in Moscow today as support for the traditional values in Serbia. Just in case anyone had doubts who was behind all that humbug.

The Serbian government remains adamant about its decision

The decision to organize EuroPride 2022 in Belgrade was made in September 2019  by the European Pride Organizations Association (EPOA). Thousands of people from all over Europe are expected to arrive in the Serbian capital to take part in the event.

EPOA President Kristine Garina said that neither them nor the local host Belgrade Pride will cancel the Belgrade EuroPride and that the right to organize it is a basic human right, while its ban represents a violation of Articles 11, 13, and 14 of the European Convention of Human Rights, which Serbia has ratified.

Garina also said that the EuroPride didn’t receive any funding from the Serbian government, while it will bring significant additional tourist income for the Serbian economy. It will also show that Serbia is a progressive and hospitable European country.

Meanwhile, the BBC service in Serbian language reports that the people who took part in the homophobic protests have announced they will gather in Belgrade again on the day the Pride Walk is scheduled.