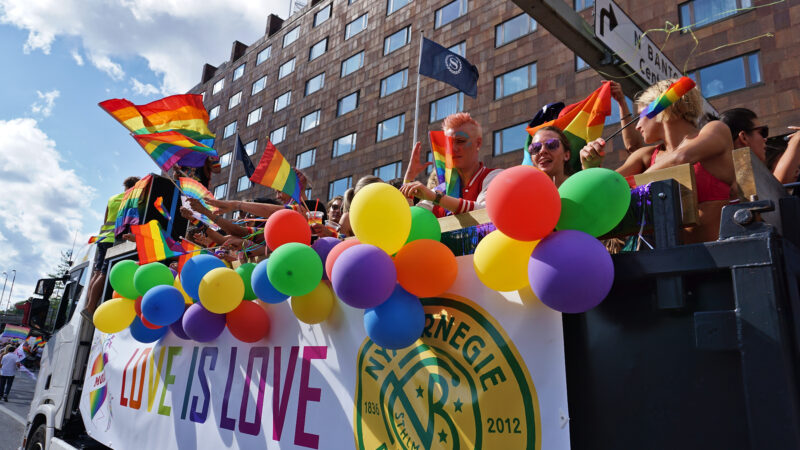 The Belgrade EuroPride is the continuation of the 2018 event previously held in Stockholm. Photo by Simon Legner via Wikipedia Commons.

This story is based on original coverage by Meta.mk, as part of the regional initiative Western Balkans Anti-Disinformation Hub. An edited version is republished here under a content-sharing agreement between Global Voices and the Metamorphosis Foundation.

In Serbia, disinformation and hate speech toward the LGBTQ+ community and supporters of human rights have been noticeably on the rise as the capital Belgrade is about to host the 2022 EuroPride during this week.

The EuroPride is a pan-European and international LGBTQ+ event hosted by a different European city each year. In 2022 it is taking place in Belgrade from September 12–18, and consists of a series of events including a film festival, conferences, and a Pride Walk.

Serbian far-right political parties and the Serbian Orthodox Church have condemned the event, calling for a ban, and conducting protests that include the glorification of Russian president Vladimir Putin as a model “defender of traditional values.”

The Serbian government has officially announced a “canceling” of the event, while organizers of the EuroPride have issued a denial, claiming it will indeed take place on September 12.

People who have been supportive of the event have faced abuse and received threats on social networks. Activist Marko Mihajlović, one of the local organizers of the EuroPride 2022, shared his views via Twitter, summarizing the experiences of the wider community.

Ever since I was a teenager, I haven't experienced so much hardship for being gay. So much hate, threats and negating of my right to live my life in dignity and equal rights has not been part of public discourse in a long time. I am not ashamed of who I am, but after 15 years, I am concerned about my life in this country…

Mihajlović also provided a concise outline of the narratives that comprise the homophobic propaganda over social networks.

“The negative comments are mainly about:
1. Negating that LGBTI+ people have any problems at all [in Serbia].
2. Demand that we hide behind 4 walls and stay silent.
3. Using our constitutionally guaranteed human rights is a provocation.
4. On the Pride we'll go naked and have sex in the streets.
5. Calls to violence.”

One instance of misinformation and disinformation that made large impact on the social networks is a viral video of an alleged Serbian mother who states that she returned to her country from Germany states after she was fined by German authorities for refusing to dress her son in female clothes. The video description also contains hate speech.

Testimony of our sister Milka who lives and works in Germany. She wants to return to a better Serbia, and that's why she has expressed support for us while we were gathering a petition for banning the [sic] faggot ball. The blackmailing she had to endure would not happen in Serbia. Males will remain males, and females – females.

The video was produced and disseminated by a local right-wing political activist, a member of an extremist faction striving to replace the ruling nationalist and populist Serbian Progressive Party (SNS) and take over the government. In response, a prominent SNS member attempted to present them as Russian agents spreading foreign malign influence.

Dragan Šormaz, a member of the Central Committee of the ruling SNS, used Twitter to warn that the video is disinformation. However, he also increased the confusion by adding unsupported claims that the woman speaking is not Serbian, but Russian and an employee at the Russian-Serbian Humanitarian Center in Niš in the south of the country, and that she had already fled the country.

This “Serbian mom” from Germany is in fact Russian, and works at the humanitarian center in Niš! She has already left Serbia, as she  fears she might be arrested at the request of Germany for the lies she said in the video that is circulating on social networks!

Inquiry by the daily Danas couldn't confirm these claims, but the Croatian fact-checking service Faktograf debunked the claims from the video about the alleged forcing of children to become LGBTQ+ in Germany as “absurd, impossible and wrong.”

In its issue from September 1, Vreme weekly from Belgrade published results of investigation about the seemingly pro- and anti-Russian claims related to the case. They interviewed the woman, as well as the man who made the video, confirming that she is indeed a Serbian living in Germany, and a single mother of a child with autism.  The “forensic analysis” by journalist Nemanja Rujević concluded that the supposed forcing of kids to become transgender by the “evil West” is groundless, but also that the woman in the video is not a Russian agent.

The woman, identified only as Milka M., explained that her video statement, given during a visit to Niš, was manipulated by a local ultranationalist politician. He was supposed to protect her identity, but didn't hide her face. As she explained, German authorities didn't force her son to cross-dress, but just invited the family to take part in an event promoting tolerance called Role Swap or Girls and Boys Day. She also clarified that the reason she had been fined is because of a specific violation of her contract with the school that provides special care for her child.

Ivica Božić, the local politician who recorded and shared the video address, was previously involved in organizing anti-vaxxing protests. In 2021 the daily Blic reported that this self-styled “defender of family values” has a criminal record with convictions for domestic violence and drugs trafficking, which was confirmed by Vreme.

In statements to Vreme, presented as part of the analytical article on the  case, Božić refuted the accusations from social media users that he is a Kremlin agent, claiming that he is “devoted to tradition and fond of pilgrimages to Jerusalem” and that he's making a living as house painter, cameraman at weddings.

Even though hate speech is a criminal offence under Serbian Criminal Code, law enforcement and judicial institutions rarely take action to sanction perpetrators. However, reports by both domestic and international institutions monitoring the progress towards democracy repeatedly indicate that “more needs to be done” by the state to address the use of hate speech in order to meet the criteria for European Union membership.

So far there have been no media reports of institutional action taken against the perpetrators of hate speech related to EuroPride 2022 in Belgrade.