'As sculptors we always visualised ourselves creating a monument someday' 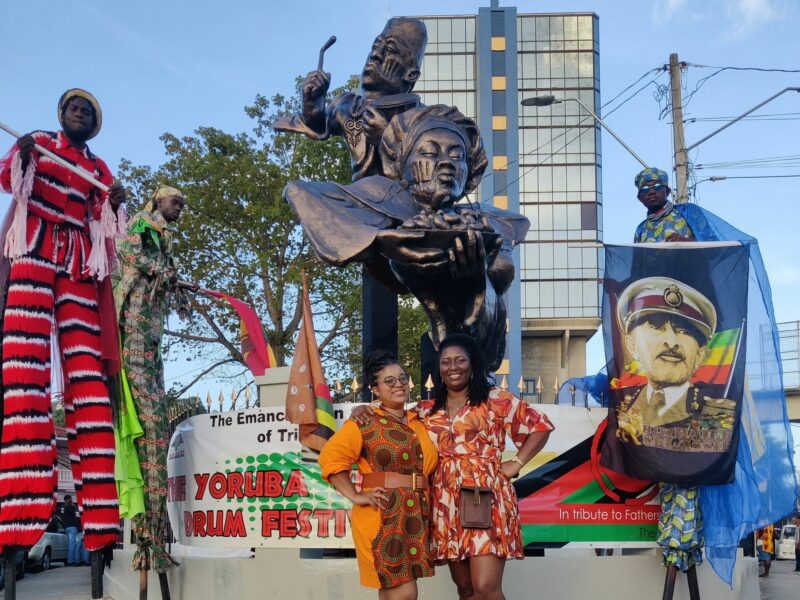 Trinbagonian sculptors Maria Diaz (L) and Sherlann Peters (R), standing in front of the Yoruba Village Monument they created together, at its permanent home in Yoruba Square in east Port of Spain. Photo courtesy the artists, used with permission.

The Trinbagonian duo of Sherlann Peters and Maria Diaz are not just friends, they are fellow sculptors. Working together, they created the Yoruba Village Monument, which was unveiled during the Yoruba Drum Festival on June 18. Commissioned by the Emancipation Support Committee of Trinidad and Tobago (ESCTT), at 20 feet (just over 6 metres) tall it is the largest public sculpture in east Port of Spain, and the only one jointly designed and executed by two women. The monument, which towers over Yoruba Square, was created as a tribute to the contributions of the Yoruba Village Community to the cultural and social fabric of the country. It depicts a Yoruba man and woman, complete with traditional scarification on their faces.

As impressive as it is, though, this is not the women's first foray into creating public art. They met while doing a degree program in visual arts at the University of the West Indies, and both attended the University of Calgary as exchange students during the last year of their programme. Prior to receiving their degrees — which happened later in their careers — they were largely self-taught.

Hailing from the community of Laventille in east Port of Spain, Peters produced an artistic interpretation of pioneering woman calypsonian Calypso Rose, which was displayed at the Commonwealth Institute in London in 2011. She has also produced images of several prominent local figures, including the country's first prime minister Eric Williams, and calypso legends The Mighty Sparrow and Lord Kitchener. Her 2004 stamp design commemorating the abolition of slavery was also very well received. Diaz, meanwhile, immersed herself in cutting-edge sculpting techniques while at the University of Calgary; from then on, her work has centred on the human form.

On the heels of Trinidad and Tobago's 60th anniversary of Independence from Britain, via telephone, WhatsApp and email, I interviewed Peters and Diaz about their art and the impact that public sculpture can have in such a young nation. 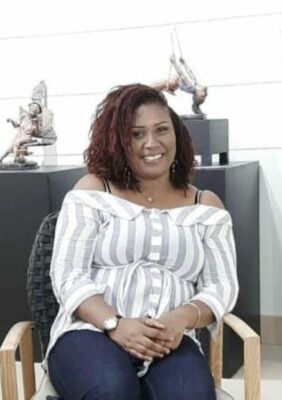 Tabatha Auguste (TA): Congratulations on your newest installation! Tell us about how the Yoruba Village Monument came to be, and how you ended up working on it together.

Sherlann Peters (SP): I was recommended to the ESCTT by Professor Ken Critchlow, a longtime advocate of my work, who always expressed the desire to see my work on a monumental scale. After being briefed on the project, I went ahead to design two marquettes; the committee choose the one they felt most represented what they were aiming for. Excited to meet the challenge, I contacted Maria, a fellow sculptor and friend of eight years, to collaborate on the project with me. 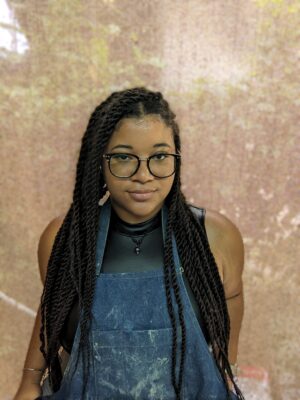 TA: It’s also quite significant that two women artists were awarded this commission when sculpture — at least locally — has traditionally been the domain of men. Tell us about that experience.

SP: It was quite challenging at times; it involved a lot of heavy lifting, working with power tools, and just physically strenuous work altogether.

Maria Diaz (MD): In Trinidad, sculpture on the whole isn't a vastly popular field, so we had to figure out some of the technical aspects of building this sculpture on our own.

TA: It’s a huge accomplishment, and I don’t just mean in terms of scale. What does it mean to you to have been responsible for such a large installation?

SP and MD: As sculptors we always visualised ourselves creating a monument someday and leaving a permanent mark on national soil. It's even more meaningful, knowing what the sculpture means to the area and the country. This is just the start of our legacy as female artists.

TA: Tell us more about the intent of the sculpture and the significance of the space in which it resides.

SP: According to books written by Eintou Pearl Springer, Rosanne Adderley, and Sylvia Frey, in the 19th century, a part of east Port of Spain was settled by many free Yoruba people, who arrived in Trinidad post-Emancipation and were able to hold on to their traditions, culture and customs — even their language. The area was known as Yoruba/Yarraba Village, and it reflected the strong influence of their West African heritage. We still have many of those influences today, including drumming, which experts say has left its mark on some of Trinidad and Tobago's Carnival traditions, as well as the practice of the Orisha religion.

TA: What message do you think it sends to the surrounding community and why is public art, especially in urban areas, important?

SP: Public art such as this […] provides a sense of belonging, and opens dialogue to and [promotes] awareness of African history.

MD: Representation of this magnitude gives a person a sense of identity within the space. 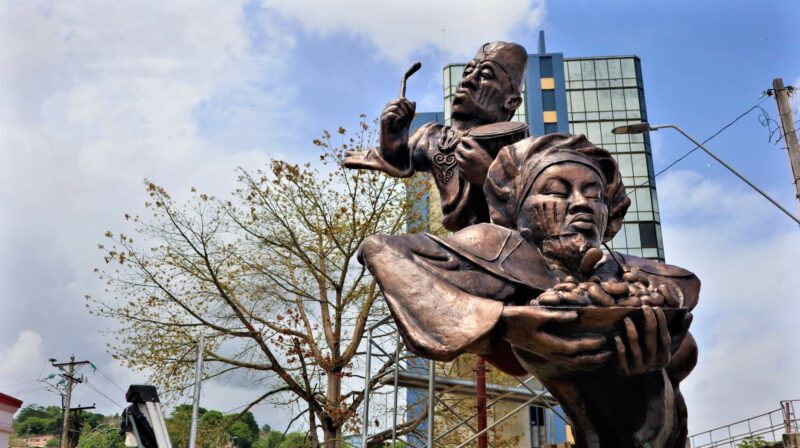 TA: Some of the details on the sculptures — the calabash, the steel pan references — are all beautifully symbolic and well thought out. What was your creative process like? How did you decide which of you tackled what?

SP: The details on the sculpture such as steel pan [in the collar and earrings on the figure of the woman] and calabash of peas [representing new growth and African heritage], with one sprouting the anchor and sankofa symbols [in the man's pendant], the talking drum [banned during slavery and from which came the birth of Trinidad and Tobago's national instrument, the steelpan], the cowrie shells were all symbols given in the conceptual phase by the ESCTT to be incorporated in the design, and because the design has two figures, we decided we'd each work on one.

[Peters was responsible for the male figure, Diaz for the female.]

MD: The monument was designed by Sherlann; using [her] marquette, we both worked separately and then brought the two figures together for finishing touches and installation.

TA: What is it like working with a friend, especially when there are such high expectations? Has the creative process helped to make you closer?

SP: Even though our approach to sculpting is vastly different, we share a lot of commonalities. For example, our materials and subjects are often very similar, and we're both self-taught, so as friends, sharing studio practices has become natural to us over the years. Working on this project was at times very intimidating; the idea of public perception and our own self-doubt was at times nerve wracking, but we cancel out each other's shortcomings and as a team, I think we're a force.

MD: Working on a piece of this magnitude was daunting. Neither of us had ever done a piece at this scale, but knowing that we would [be] working on it together, we welcomed the challenge. Apart from us both being sculptors and being really great friends, we also have different strengths and weaknesses that complimented the other person's. Sherlann was stronger in some areas where I wasn't, so she took the lead, and then there were areas where I was stronger and took the lead. Thankfully, we trusted each other […] I think what made this dynamic work was that there [weren't] any egos involved and we both shared [the] same goal of wanting to see this monument erected.

TA: Is there an underlying message — in terms of equality or gender relations — in the fact that there is both a male and female figure?

SP: The Yoruba culture functions under a system of gender balance; women attain power and influence through economic and religious roles. The sculpture features a Baba (male) — the protector — and Iya (female), seen as a nurturer. Although their roles differ, they are both equally necessary. It was important that both male and female viewers can see themselves represented in this monument.

TA: What would you like the viewers of this sculpture to take away?

SP and MD: The Monument speaks of the rich history and culture of the soil once known as Yoruba Land and the importance of its preservation. Through this piece we hope to invoke a sense of pride, affinity, and restoration of harmony in the existing communities [which have been victim to increasing levels of gun violence].

TA: In the context of greater sensitivity to the historical contextualisation of public art, why are sculptures like these critical, in terms of public awareness of the African legacy?

SP: Their presence in our landscape acts as a medium that allows future generations to pursue conversations and the history of our ancestors not taught at schools.

MD: To have a monument of something or someone gives the subject an elevated form of reverence to it, it acts as a public acknowledgment of its subject as being important to the people and space it is in. This is why the Yoruba monument is necessary in the Yoruba Square. Our African heritage plays an important part of our history, and not enough emphasis is placed on their contributions to the development of the country. The monument will act as a permanent reminder and pubic acknowledgment of the African legacy in Trinidad and Tobago.

TA: How do you hope to develop your art, and do you feel Trinidad and Tobago is fertile ground for the development of artists like yourself?

SP: Trinidad and Tobago is a great starting point to find your artistic voice. The art community is very open to young artists finding their style. However, once you have reached a certain point in your career you may run the risk of outgrowing the space and may have to seek international opportunities to advance your career.

There has been a resurgence of support for creatives in the past few years. The government developed a national registry [for] professional artists and cultural workers, [which] offers tax break incentives to companies that buy their art. It also offers a number of grants, mentorship programmes, and funding for creative projects.

MD: In the private sector, art galleries are opening their doors to emerging artists, allowing them to show their work in a gallery setting. Communal art workshops have also began popping up, and there is now a larger public interest in art and creative activities.

TA: What guidance would you give to young artists, especially women artists?

SP: Make art that makes you happy. Mistakes and failures are your greatest teachers [so] allow yourself to learn and improve from them rather than be despondent, and compete only with yourself.