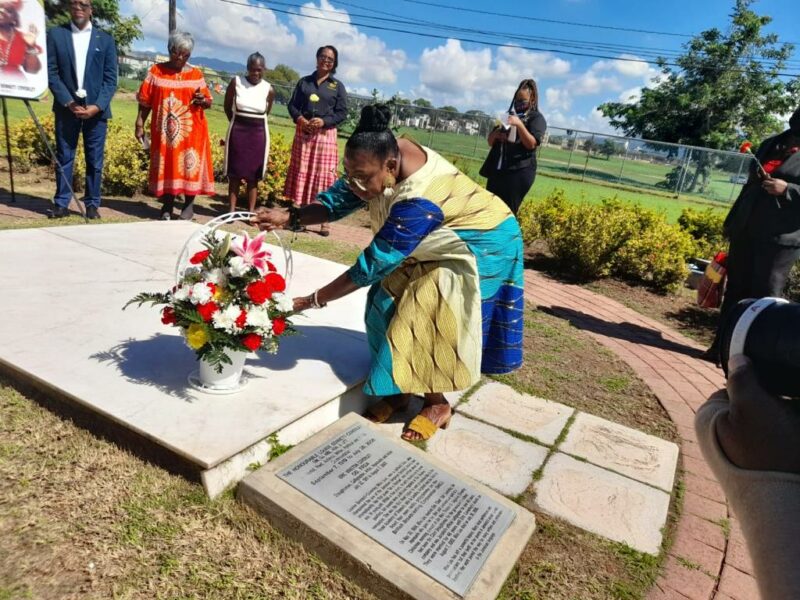 Jamaica's culture, gender, entertainment and sports minister Olivia ‘Babsy’ Grange lays a wreath on the grave of Louise Simone Bennett-Coverley on the occasion of what would have been the poet's 103rd birthday, September 7, 2022. Photo courtesy the National Library of Jamaica, used with permission.

The name and titles of Jamaica's beloved poet — Dr. The Hon. Louise Simone Bennett-Coverley, OM, OJ, MBE, Hon. D. Litt. — sound very grand, but to Jamaicans, she was, and always will be, simply “Miss Lou,” who spoke to them in their own language: Jamaican Patois (Patwa). No surprise then, that on September 7, 2022, which would have been Miss Lou’s 103rd birthday, Jamaicans reacted with delight and appreciation when Google Doodles shared:

Louise Bennett-Coverley, also known as Miss Lou, was one of the first people to use Jamaican patois as a means for artistic expression.

Learn how the beloved Jamaican poet, performer & activist empowered her country to take pride in its unique language —> https://t.co/WnZtFx7Nql pic.twitter.com/hSd9XrRrpj

The illustration of Jamaica’s cultural icon reflects Miss Lou's humour, energy, and embrace of Jamaica’s oral tradition. She is depicted sitting under a tree, telling stories to three children who are paying rapt attention, while a Patoo the owl sits on a branch and Anancy, the spider, leans against the tree trunk, listening in. It is a reference to the Anancy story “Anancy and Patoo” – one of the many folktales that the poet, storyteller and actor used to tell. A well-known character in Jamaican folklore, Anancy (also spelt Anansi in some parts of the Caribbean) is a greedy opportunist and trickster, with his origins in the Akan culture of West Africa. As with many other tales, poems and songs, Miss Lou’s inimitable style brought Anancy to life for Jamaicans of all ages, especially children.

Robyn Smith, the artist who created the Doodle, was thrilled when she was approached about working on it:

I screamed. I was just so excited about getting to work with Google, but then on top of that to have it be about a Jamaican subject, and that subject being Miss Lou, I was washed with pride for Jamaica.

Happy 103rd Birthday to the Honourable miss Louise Bennett-Coverley🖤
It was such an honour to draw her for Today’s google doodle (in Jamaica)! pic.twitter.com/nAS11bGAe6

The Google Doodle gave a boost to the Jamaican Government’s focus on Miss Lou during the month of September. A full calendar of events is underway in several parts of the island.

On her birthday, the University of the West Indies unveiled a bust, opened a Miss Lou exhibit and launched the 20th anniversary celebrations of its Language Unit, which focuses on promoting Jamaican Patwa and works to dispel lingering discrimination on the grounds of language.

The Ministry of Culture, Gender, Entertainment and Sport Olivia “Babsy” Grange tweeted from a wreath-laying at Miss Lou's grave in National Heroes Circle:

In bright sunshine today, Miss Lou Day, we commemorated at National Heroes Park, the 103rd anniversary of the birth of Dr the Honourable Louise Bennett-Coverley with Floral Tributes. pic.twitter.com/3Nc9v3I2mi

On the evening of her birthday via Facebook Live, Jamaican creatives participated in a lengthy tribute. Meanwhile, on Twitter, this young brother and sister duo put in a performance:

The tribute was done in front of Miss Lou's statue in Gordon Town, St Andrew. pic.twitter.com/7APgIXabdw

Happy birthday Miss Lou! As one of the many forerunners in seeing the value and beauty of Jamaican culture, we salute you and try our very best to walk in your footsteps in highlighting the beauty that is Jamaican culture! pic.twitter.com/PosYJyrIsP

To the Jamaican that is working at Google, thank you. We see you ! Continue to gives us the good PR. Happy birthday Miss Lou 🇯🇲🇯🇲

Another Jamaican expressed her appreciation:

But why is Miss Lou so special? As writer Jean Lowrie-Chin asserted in a 2015 article, “Miss Lou Made Us ‘Smaddy’” — an almost untranslatable Jamaican phrase meaning someone with dignity and status, to be respected.

University lecturer Damien King made a similar point, sharing a photo of the statue of Miss Lou in Gordon Town, where she lived:

Growing up in the 1960s, one would never hear the Jamaican language on TV or radio. “Bad English” was not allowed. Miss Lou, whose birthday we celebrate today, changed that, exposing us to the beauty and poetry in it. Instead of the statues to politicians, we need more of these. pic.twitter.com/XRmWiydVkn

My mother was kind and loving. She was not tribal. But she always sided with the ordinary people. She believed in them unconditionally. And she valued the language they spoke. Because of Miss Lou, our language is respected and celebrated on the international scene, particularly in music and sports. The world has adopted many of the sayings she promoted such as, ‘Wa a gwaan?’ (What’s happening?). Her favorite was, ‘Walk good an good duppy walk with you’ (Take care as you go and may good spirits keep you company).

My mother was a trailblazer and pathfinder. Her legacy is long-lasting. I am blessed to have had such a mother and to have shared her with the world.

In light of the significant role Miss Lou played in post-independence Jamaica, as an example of the important role that language and culture can play in weakening colonial shackles, isn’t it time she was recognised as a national hero? According to a recent poll, one-third of Jamaicans answered in the affirmative, with Bob Marley also considered a viable candidate.