Meet Ganesh Birua, a champion who is bringing the indigenous Ho language online

Learning in another language was a big struggle for him 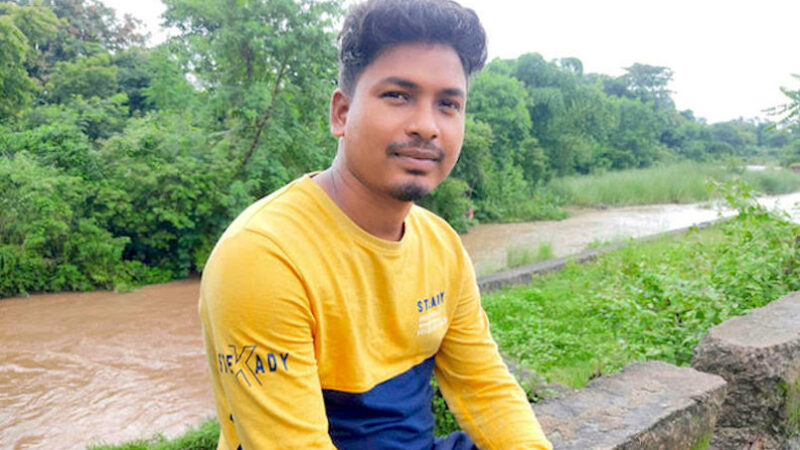 This post is part of a series of interviews with our guest hosts of the @AsiaLangsOnline rotating Twitter campaign at Rising Voices.

Ganesh Birua is a young activist from Dighiabeda village in the Mayurbhanj district of the eastern Indian state of Odisha. He is the first person in his village to use the internet for a cause. In 2014, he opened his first Facebook account and couldn't find his mother tongue, the tribal Ho language on the internet.

Ho is a Munda language of the Austroasiatic language family and is spoken by over one million speakers of the Ho, Munda, Kolha and Kol tribal communities in Odisha, Jharkhand and West Bengal in India. The designation of “Ho” is derived from the Ho native word “𑣙𑣉𑣉” which translates as “Human being.”

For the first few years, Birua learnt the script of Ho (called Warang Citi) and started posting Ho letters and words on his Facebook page. The effort was barely noticed until he opened a blog called Elabu Etona Warang Citi (Let’s Learn Warang Citi) and opened accounts on Twitter, YouTube and Instagram to promote the language online. These social media accounts have become major sources for the development of the Ho language.

Rising Voices talked to Birua to learn about his efforts to bring his mother tongue to the internet. An edited excerpt of the interview follows.

Rising Voices (RV): Please tell us about yourself and your language-related work.

Ganesh Birua (GB): Johar [greeting in Ho language]. I belong to the Ho tribal community of Odisha state, India and I am a postgraduate student. I love creating online content and it's my hobby. Since 2017, I am working for the Ho language script Warang Chiti Project 2030. So far I have created more than 500 images. I post image content every day on Facebook, Twitter and Instagram.

Till the 12th class, I studied in Odia language medium but struggled to speak it, as I was not comfortable in any language other than my mother tongue, mainly because we talked only in the Ho language in our house.

The language was a big struggle for me — I could not make friends in college because I was not fluent in other languages. I was not able to communicate with anyone. Now, I can speak, read, and write in five languages.

I came to know about the internet when I stepped out of the village for higher education. For the first time, in 2013, I found out about our script Warang Chiti on Facebook. I was excited to learn our script and immediately tried to search on Google, but I could not find any Warang Chiti-related content.

In today's time, it is a pity that there is no online content available in any particular language or script. I wanted to change this for my mother tongue. My biggest struggle was making a new identity for the Ho language through the Warang Chiti script. Indian digital news publications Scroll.in and Argus wrote about my efforts.

RV: What is the current state of your language both online and offline?

GB: New content for the Ho language has started to appear online. At present, young users are creating quality video and audio content — mostly songs for entertainment — and audience views have started coming along.

I think it is only after the popularity of these songs in the beginning that most people have come to love the language. Now about 50 to 60 songs are being released in a month.

For the last few years work is going on to create digital content for Ho Wikipedia and ho.triballanguage.in and I am also involved. Now, if anyone wants to learn Warang Chiti online, then it can be learned quickly in a very easy way. But this is not enough. Apart from this, there is a need to make available digital content on various subjects like culture, tradition and language.

Currently, the Ho Virtual Keyboard is also available on smartphones and desktops for creating text. Creating text content with this keyboard is very easy and it can be done quickly.

From 2021, the Android 11 version is supporting the Warang Chiti script. Now we can write in Warang Chiti script on social platforms like Facebook, WhatsApp and blogs straight from our mobile phones. We can chat with friends in our language on Messenger or WhatsApp.

The promotion of the Ho language is doing better offline than online. Program meetings and awareness campaigns are conducted from village to village to sensitise the people, the purpose of which is to encourage the people of the community to pay attention to the language and fight for it.

There are MLE (multilingual education) teachers for the Ho language in the state of Odisha, where classes 1 to 5 are taught in their mother tongue. Along with this, the government has published the Odia-Ho Dictionary.

The National Ho Youth Meet (NHYM) that takes place annually was formed to preserve the Ho language and culture. In Jharkhand, Ho language study is available at the university level. However, it should be available for learning at the primary level. There have been several rallies and protests for the inclusion of the language in the Eighth Schedule of the Constitution (as an official language).

RV: What are your motivations for seeing your language present in digital spaces?

GB: When I started this work, I did not think that I would be able to take it much further. In the following years, I resorted to trying different things and increased my efforts. I focused on doing more. Initially, I could create image content in only three languages; later I started creating in a total of 6 languages.

In recent years people have discovered my work and started liking it too. Now I get a lot of likes, comments, and shares for my content.

I get the most inspiration when someone shares my posts. And when I see content in my language, I get inspired too. For example: Hooter Baa (pink flower) and Gulel (children's toys).

RV: Describe some of the challenges that prevent your language from being fully used online.

GB: The internet has become a part of our daily life, and now it has become imperative for us to move with the internet. If we ignore the internet, we will be left behind — there's no doubt about it.

Our community started using the internet only a few years ago because approximately 90 percent of speakers live in villages with limited internet access. This is one of the reasons they have very little connection with the digital world.

So far there are only three third-party applications featuring a Ho mobile keyboard. Some are difficult to install on certain phones. If the Gboard app includes the Ho language, then more people will be able to use it seamlessly.

Creating digital content requires awareness. I sometimes involve people from the Ho community in my work and also give them admin permission. I wish I had people as an admin who could help to create content and can create post updates every day.

From September 6–12, 2022, Ganesh Birua will be hosting the @AsiaLangsOnline rotating Twitter account, which explores how technology can be used to revitalize Asian languages. Read more about the campaign here.