A number of man-made forces are threatening these creatures 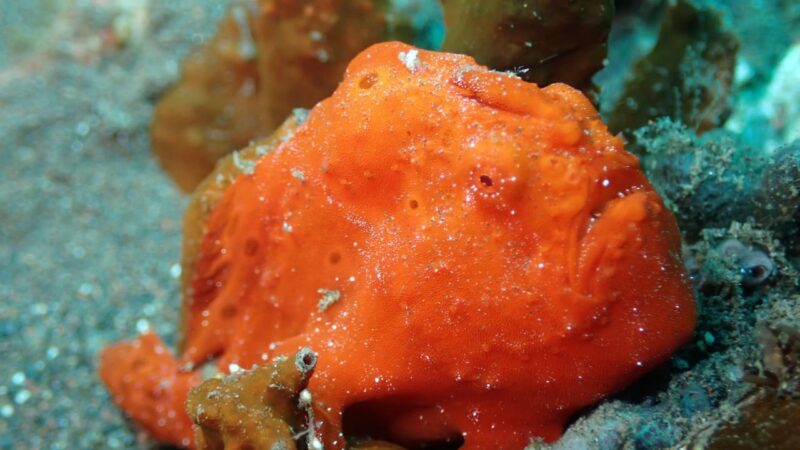 As the largest archipelago in the world, with over 17,000 islands, Indonesia’s coastal waters are host to a vast and diverse network of marine life and ecosystems. As rising ocean temperatures due to climate change increasingly threaten marine ecosystems, it's worth taking an up-close and personal look at some of the strange and otherworldly creatures who inhabit the oceans we hold dear, as well as the forces that threaten them.

This photo essay presents a brief snapshot of the biodiversity in Indonesia’s coastal ecosystem and discusses the environmental and social threats they face. 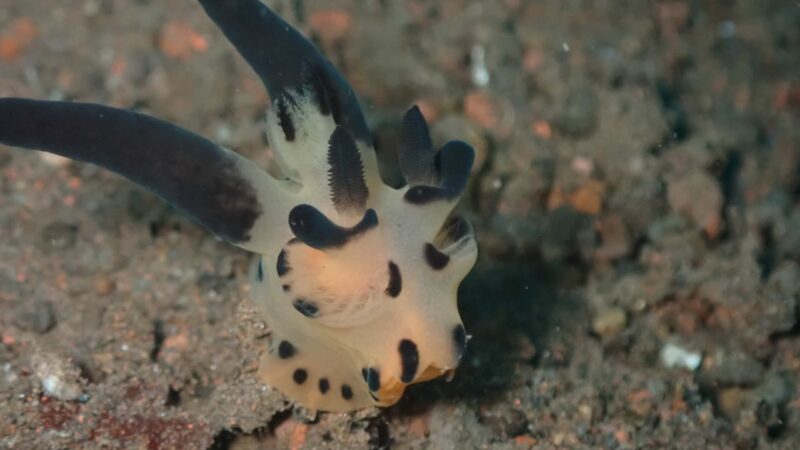 These little creatures are found in the Indian Ocean and the Western Pacific. They get their name because they resemble the iconic Pokemon character. Spanning just five centimeters in length, they are difficult to locate and are a relatively rare find. 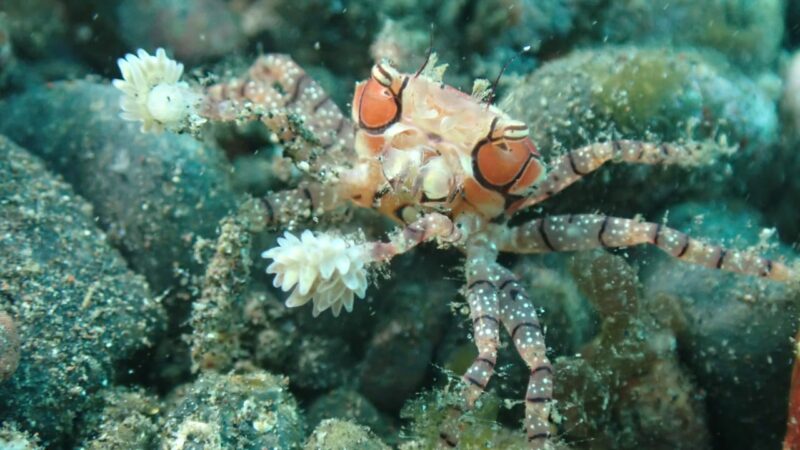 The Boxer Crab is one of the more interesting creatures found on the Indonesian seabed. It has a symbiotic relationship with stinging sea anemones — it feeds them in exchange for protection — and holds them in its front claws to frighten potential predators.

“These crabs wield sea anemones attached to their claws in horizontal motions as they move,” says Seven Seas Media, a marine watch group. “This colorful display serves as a natural deterrent to predators, and when directly threatened, the crab will utilize the sea anemone in a forward, ‘punching’ movement towards the aggressor.” 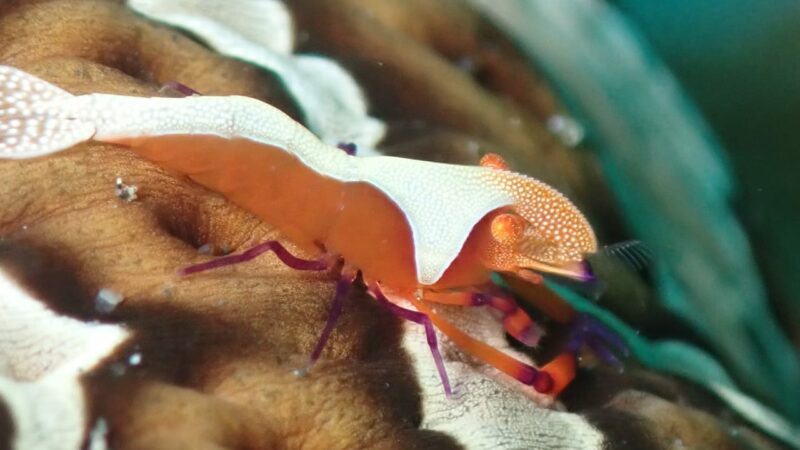 These colorful shrimp can grow to a length of 1.9 centimeters and are often found living on larger hosts.

A pygmy and common hippocampus seahorse

At a maximum of two centimeters, the pygmy seahorse (left) is one of the smallest seahorse species in the world. 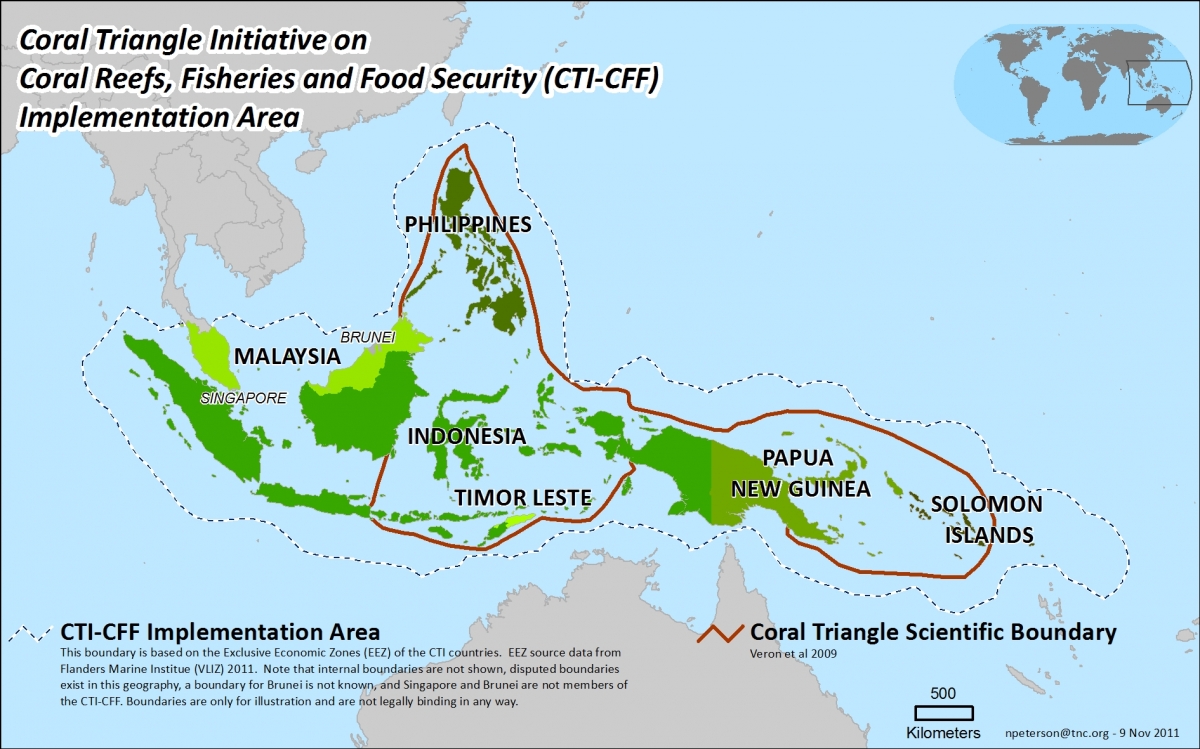 The Coral Triangle from Wikipedia. Used via CC-BY-SA-4.0

It is exclusively found in the Coral Triangle, a triangular region spanning from the Philippines and Malaysia in the east to Indonesia and Timor Leste in the south, and the Solomon Islands to the West. This pink seahorse typically resides in pink palm fan corals or other soft corals and seagrasses that allow it to camouflage itself remarkably well.

The second image is of the common hippocampus seahorse. Like all seahorses, the hippocampus uses its tail as an anchor to bind itself to corals, plants, and other surfaces. It is probably most famous for its unusual method of reproduction, in which the female produces eggs, which the male incubates through a pouch in its tail until giving birth. 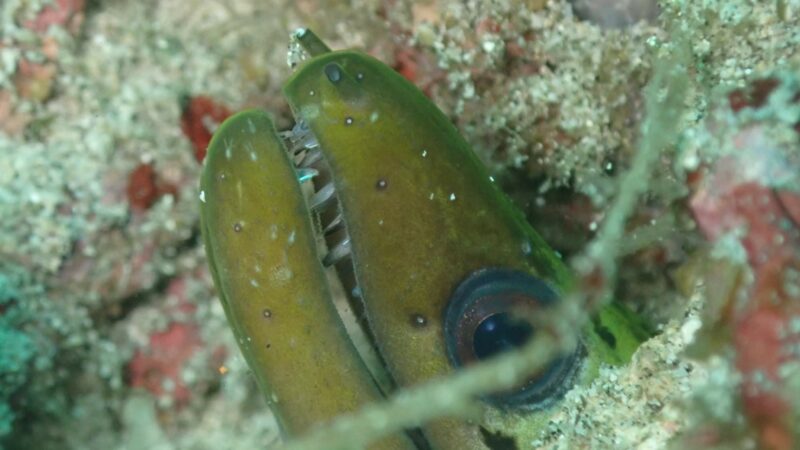 The fimbriated moray eel can reach a length of 81 centimeters. There are over 200 different species of moray eel, most of which are poisonous. While these eels rarely attack humans, if threatened, they have been known to attack, and their bites contain dangerous toxins. Their razor-sharp teeth can also cause significant bleeding and are infamously painful. Most attacks reportedly occur when scuba divers unwittingly put their hands into holes occupied by moray eels. 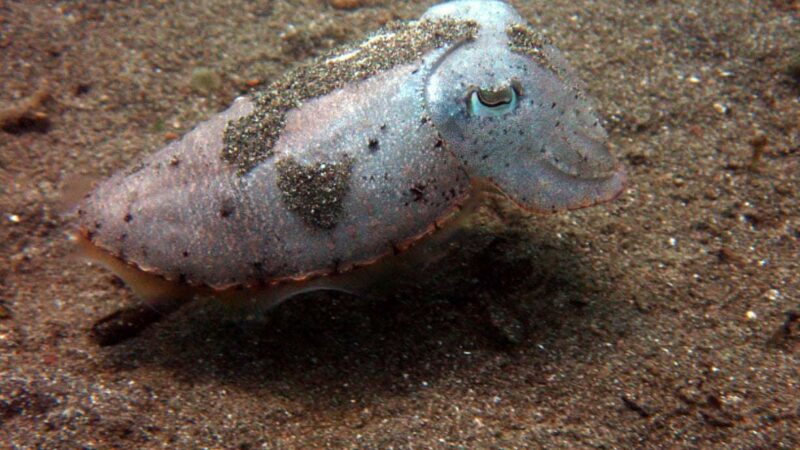 The cuttlefish, or cuttles, is a Cephalopod, cousin to the better-known squid and octopus, and is often hunted to be sold as seafood. They are believed to be one of the smartest invertebrates. According to National Geographic:

Cuttlefish have a large brain-to-body size ratio—among the biggest of all invertebrates—which makes them incredibly intelligent. They can count and can remember what, where, and when they last ate; a memory trait once believed to be unique to humans.

Some species of cuttlefish are classified as endangered. Presently, their biggest threats are ocean acidification — changes in the pH of the ocean due to growing carbon dioxide emissions in the atmosphere and ocean — and overfishing. 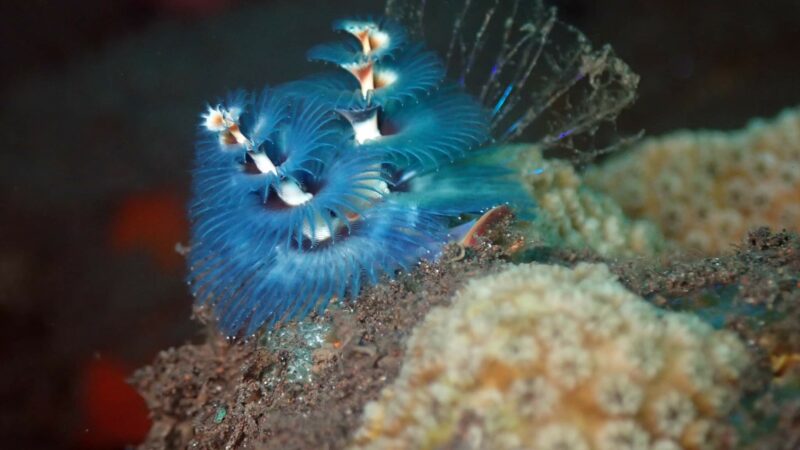 Christmas tree worms are spiral-shaped worms named for their festive, conical appearance. They typically span about 3.8 centimeters long and can be found in many colors, including red, orange, green, and yellow. They use their colorful plumes for passive feeding and respiration. They are sedentary creatures as the worm burrows into the rock to anchor itself amid current fluctuations. They are very sensitive to the environment around them and, if feeling threatened, will quickly retract into their burrow.

According to the UN Educational, Scientific and Cultural Organization, “more than half of the world’s marine species may stand on the brink of extinction by 2100.” They add:

Rising temperatures increase the risk of irreversible loss of marine and coastal ecosystems. Today, widespread changes have been observed, including damage to coral reefs and mangroves that support ocean life, and migration of species to higher latitudes and altitudes where the water could be cooler.

Most of the creatures featured above inhabit Indonesia's reef ecosystems. About 25 percent of all sealife reside in the “rainforests of the sea” — the coral reefs. These reefs are dense gardens teeming with life and biodiversity. They also play an essential part in maintaining marine ecosystems and protecting land from erosion.

Aside from their biological importance, they are also a major source of jobs for coastal communities, a crucial economic driver, and a source of food and medicines.

According to the United Nations Conference on Trade and Development (UNCTAD), as of 2016, 3 billion people rely on the oceans for their livelihoods, and more than 350 million jobs are linked to oceans worldwide.

Indonesia has an area of about 51,020 km2 of coral reefs  — representing about 18 percent of the world's total.

However, it's becoming clear that the magnificent creatures featured in this piece, as well as our coastal economies, are under threat as the climate crisis warms ocean waters and threatens coastal ecosystems. Australia’s Great Barrier Reef has already experienced significant coral bleaching, a phenomenon where brightly colored corals go dormant and turn a ghostly white due to outside pressures such as warming temperatures, pollutants, or a change in water pH levels. A report published by Australia's Great Barrier Reef Marine Park Authority  in May 2022 shows that 91 percent of the great barrier reef “exhibited some bleaching.”

Coral bleaching. Scott reef, April 2016. Photo via the Australian Institute of Marine Science. Free to use.

Though some groups are trying to restore the coral reefs, such as this all-women coral conservation team in Gilli Air, Indonesia, it is clear that without serious societal changes, the next generation may not be able to meet the amazing creatures featured above.

The photos were gathered by experienced dive masters — experts who have passed a number of diving courses and trials, approved by the international diving course leaders, the Professional Association of Diving Instructors (PADI) or Scuba Schools International (SSI).

Though experienced instructors know how to navigate marine ecosystems in sustainable ways, recreational diving can both directly and indirectly cause harm to marine life.

The direct harm unfolds underwater as inexperienced divers have been known to bump, kick, crush, or disturb the corals and marine life.

Increased development on the coasts for dive centers and other tourism recreation facilities, coral damage due to increased boat usage, and pollution from motorboat gas are also posing an indirect threat to the coasts. Increased coastal usage and development also lead to larger amounts of waste and plastic, which inevitably end up in the ocean.

Some dive organizers, scientists, and governments are hoping to mitigate these risks by blocking overused dive sites, allowing the area to recuperate, and introducing permits.

There are also initiatives like the Green Fins initiative and Project AWARE, two global underwater conservation movements. They have a number of campaigns tackling litter and plastic problems, threats to sharks and other marine predators, promoting sustainable diving and marine tourism, and funding coral regeneration projects.

Tourism can be a double-edged sword. On the one hand, it is hugely important for the economy and can bring people close to nature so that they appreciate the wonders of the ocean more. On the other hand, if it is not done sustainably, it can kill the very ecosystem that tourists have come to visit.