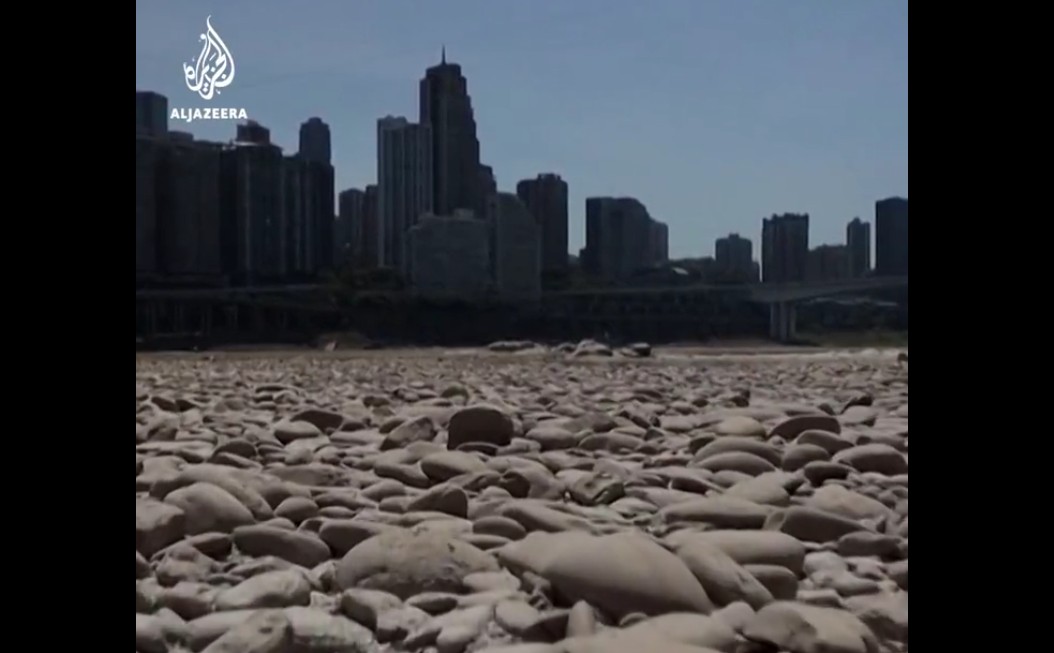 This summer, many countries have battled extreme weather caused by the climate crisis. China hasn’t escaped this challenge and has been hit with the most severe heatwave and drought in its history. However, even amid these natural disasters, the country has been conducting large-scale COVID-19 tests in devastated regions.

While the rest of the world was shocked by the citywide PCR tests in Chongqing, China, on August 24 as the city was suffering from drought, wildfires and a record-breaking 45-degree Celsius heatwave this summer, on Chinese social media, the event was depicted as a nationalistic challenge to overcome.

China has been experiencing the worst heatwave in its history for over two months. According to the China Meteorological Administration, between June 1 and August 15, 914 weather stations, covering 37.7 per cent of all the observatories, recorded 38 degrees C or above, with 262 recording 40 degrees C or higher. Meteorologists also noted that 155 locations recorded record-breaking heat. Even though autumn is approaching, extreme weather still lingers in central China.

Harsh drought and wildfires emerged along with the heatwave. The most affected regions are Sichuan, Hubei, Hunan, Jiangxi and Jiangsu, located in the Yangtze River basin, the longest river in Asia and home to the world’s largest hydroelectric power station. Now the river is drying up:

This is China’s worst drought since 1961. It has resulted in a 50 percent cut in the supply of hydroelectric power, and China’s most populated Sichuan province is facing power supply difficulties as the hot weather and increased AC usage exacerbate the shortage:

The summer drought has already damaged more than 2 million hectares of farmland in the Yangtze river region. As the dry seasons are approaching, the Ministry of Agriculture anticipated a “serious threat” to the country’s autumn crops.

The very landscape of Chongqing, a Chinese megacity that also takes in surrounding farmland and picturesque mountains, has been transformed by an unusually long and intense heat wave and an accompanying drought. https://t.co/w2bfGAmYjL

The extremely hot and dry weather has led to numerous wildfires, with the biggest one occurring near Chongqing city on August 17. It took more than a week to get the blaze under control.

Despite heatwave, droughts and wildfires, Chongqing city rolled out citywide COVID-19 tests on August 24 after 40 positive COVID-19 cases were identified. Below is a viral video on Twitter showing a PCR test queue in Chongqing city with wildfire smoke in the background:

August 23 [local time August 24], Chongqing. A huge number of people are queuing up for PCR tests, while in the background, we can see smoke coming from the wildfire.

Only two positive cases were identified among the 10 million residents.

While many people from outside China find the scene appalling, on Weibo, the citywide PCR test is depicted as an eminent challenge. For example, many Chongqing-based media outlets have used the hashtag  #Chongqing people could overcome any setback# ( #没有一个坎是重庆人过不去的#) when reporting on the citywide COVID-19 tests.

As for the reports on the wildfires, official media outlets highlights the heroic act of volunteers who provided supplies to frontline firefighters on motorcycles. Most of the reports have glossed over any injuries or human suffering. The natural disasters have been turned into a celebration of the nation’s grit, as reflected in a flood of  videos and photos of the Chongqing wildfire on Weibo, like  this one: 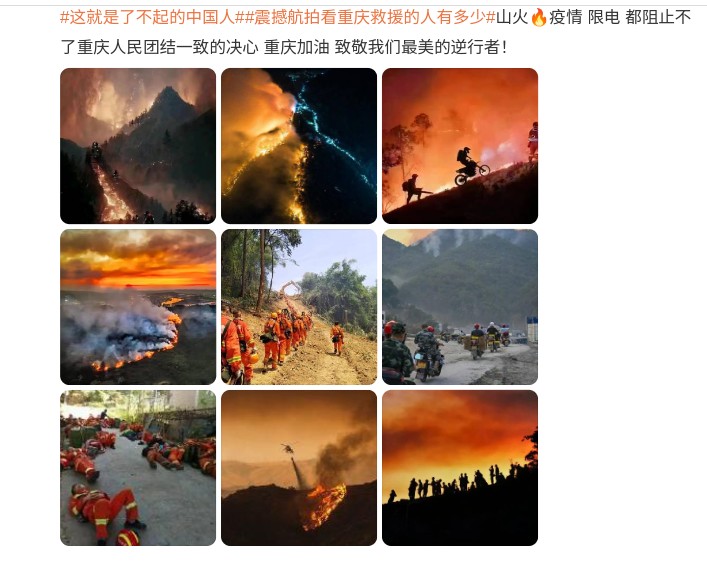 Wildfires, the pandemic, and power cuts can't stop Chongqing people from being united. Chongqing adds oil. Tribute to those who fight against all the odds.