Forty-three years after a masterpiece of Trinbagonian art was destroyed, a loving replica offers some redress 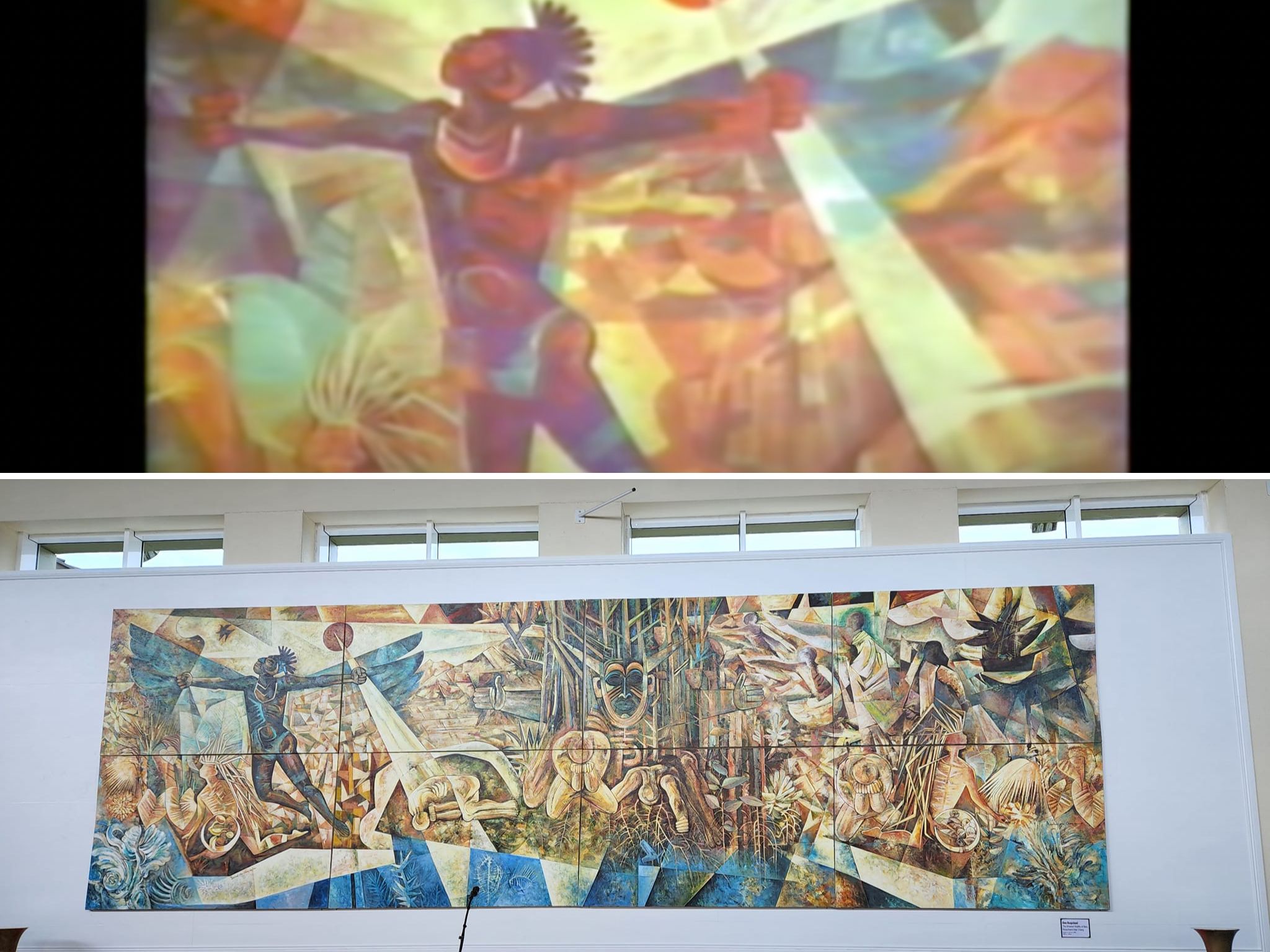 In just three short months in 1960, just two years before Trinidad and Tobago finally claimed its independence from Britain, painter and Carnival designer Carlisle Chang, who has been called “the father of Trinidadian art,” created what art historian Geoffrey MacLean has suggested is “possibly the most important work of art in the Caribbean.”

Less than two decades later, it would be lost — but as Trinidad and Tobago prepares to celebrate its 60th anniversary of independence on August 31, a lovingly recreated replica is going a long way to providing atonement.

At 50 feet long and 15 high (approx. 15 x 4.5 metres), Chang's mural, “The Inherent Nobility of Man,” was a significant piece of public art — both in terms of scale and concept, in that it perfectly captured the essence of Trinidad and Tobago in that heady and hopeful time in which the new nation was beginning to chart its own destiny.

Several sources noted that the mural depicted everything from the “successive waves of immigration” into the country, to “the pressures and restrictions of society on the efforts of the individual for self-realisation.” The only way that Man can rise above these challenges, the art suggested, is to reinvent himself “through a return to the womb to recreate in turn his environment in a resurrection”.

The mural was installed at the Arrivals Gate of Piarco International Airport, where it gave both locals and visitors alike a sense of what it was to be Trinbagonian, but in an ironic twist of fate that suggested the country still had a long way to go in understanding both itself and the creative worth of its people, “The Inherent Nobility of Man” was demolished by construction crews during extension works to the airport in 1979.

Naturally, there was great outrage about the destruction of such an important piece of art, from such an influential artist — after all, Chang had also been commissioned to design the fledgling nation's flag, and was part of a committee charged with creating the country's coat of arms — but a post on 101 Art Gallery's website claims that “a minister of government was quoted as saying that certain sacrifices had to be made for ‘progress’.”

Academic and newspaper columnist Selwyn Cudjoe, in observing that “the central motif of that work was ‘a winged Amerindian’ or what Trinbagonians called ‘The Humming Bird Man’ that flew over the country to pollinate a new national consciousness,” noted that after the mural was ruined, Glenn Roopchand, a protégé of Chang’s, recreated it in 2006.

When the replica was first unveiled at the National Museum and Art Gallery in Port of Spain, artist Adele Todd, writing on The Bookmann blog, called it “a national feat […] correcting an overdue wrong,” but she also acknowledged that “one can attempt to copy a work, but one cannot copy the energy, drive and soul of a piece.” Still, Todd surmised:

Mr. Roopchand’s efforts to right the wrong done to his teacher is definitely noteworthy, and it is important […] for that aspect, and this makes it very valuable to us today and tomorrow.

Now, just days before this milestone anniversary of independence, the replica has been successfully installed at Piarco International Airport thanks in part to the efforts of cultural activist Rubadiri Victor. In a Facebook post about the coup de maître, Victor wrote that the destruction of Chang's original masterpiece “stood […] as an indictment on how our leaders treat our Visionary class.” Roopchand's reproduction of the work, he said, had helped to break the curse.

The final part of the story, though, was for the work to be re-installed, a feat that had eluded Victor several times over the last decade. Roopchand approached Victor earlier this year, asking him to advocate once more for the work to be displayed at the airport, but passed away in July 2022 with no idea how the story would end. 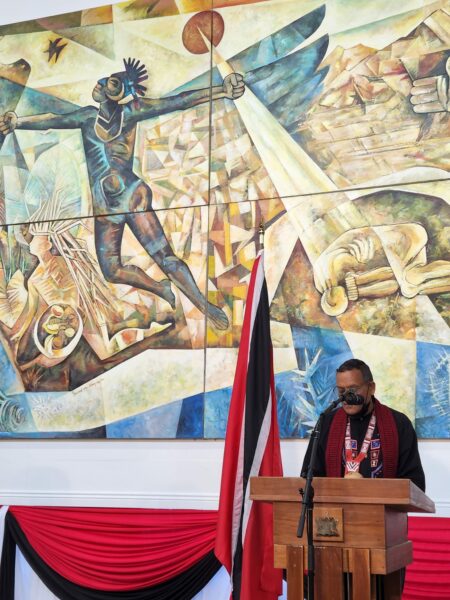 Carib Chief Ricardo Bharat gives the prayer below the ascendant image of the Amerindian hero The Hummingbird Man, from Glenn Roopchand's recreation of Carlise Chang's mural ‘The Inherent Nobility of Man,’ which was installed at Trinidad's Piarco International Airport more than 40 years after the original was destroyed. Photo courtesy Rubadiri Victor, used with permission.

On August 25, the reconstructed version of “The Inherent Nobility of Man” was installed in its rightful place at the Arrivals Hall of Piarco International Airport. The unveiling ceremony took place in the presence of members of the First Peoples, whom Victor felt strongly “should hold pride of place as they are the protagonists of the painting.” Additionally, several of Trinidad and Tobago's “senior artists” attended the ceremony.

These things matter because they are Sacred. These are the protocols of Nationhood & Rituals of a Noble Humanity. […] You see that first picture of the Carib/Kalinago Chief giving the prayer at the podium with the image of the Amerindian Hero the Humming Bird Man from the mural behind him – you see dat!!! Dat is a Magic we probably won't realize save we Soul til a decade from now. For that moment alone! The curse is lifted.

Making the opening remarks at the unveiling of the 40-foot painting, Minister of Tourism, Culture and the Arts Randall Mitchell stated:

As we celebrate our 60th Anniversary of Independence, we can proudly say we have a strong arts community working to preserve our stories for future generations.

Those who remember the devastating loss of Carlisle Chang's original will no doubt hope those words are true; that going forward, there will be inherent nobility in the way Trinidad and Tobago treats its artists.