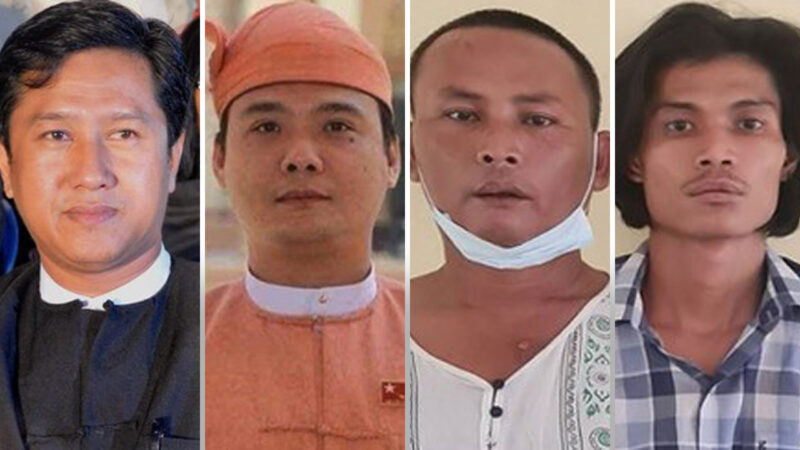 It was the first time the death sentence had been carried out by authorities in Myanmar in over 30 years, and signalled an escalation of repression after the junta grabbed power in February 2021.

The four activists sentenced to death were Hla Myo Aung, Aung Thura Zaw, Ko Jimmy, and Phyo Zeya Thaw. They were tried and convicted by a military court on terrorism charges, with the men's supporters claiming that the four were denied due process.

The remains of the executed activists have yet to be released to their families. Officials have also refused to state the exact date when the executions were carried out, but they made the announcement on July 25 through state-owned media networks.

Ma Nilar Thein, the wife of Ko Jimmy, issued a statement on August 20 condemning the execution as “an unlawful act of murder and a war crime.” She recounted how authorities deprived her husband of his rights as a prisoner of conscience:

…he didn’t have any rights as a political-prisoner such as prison visits, receiving medicines and foods from the family, and legal representation from a lawyer. And, the trial was also a closed trial too and no one was able to access the trial.

A family member was allowed to have a Zoom Meeting with him for around 20 minutes, just a day before they carried out the execution.

The couple were prominent student leaders of the 88 Generation Students, a group that led pro-democracy protests in 1988.

In an interview with Radio Free Asia (RFA), Ma Nilar Thein asserted that the junta will be made accountable for the injustices they have committed.

As I have said in the past, they will have to pay one day for each and every crime or whatever they have done. I didn’t say that without a reason. One day, the perpetrators will meet the fate and punishment they deserve for the actions they have committed.

Now in 2022 it feels like a nightmare. The executions of Ko Jimmy & others were the first in Myanmar in decades. This escalation is designed to strike fear & show the junta will stop at nothing to eliminate perceived threats to its rule. Nilar Thein & her daughter are in hiding. pic.twitter.com/dV7teBWULn

Another activist executed by the junta was Phyo Zeya Thaw, a former rap artist and National League for Democracy (NLD) lawmaker. NLD was the ruling party before the army staged a coup in 2021.

His mother, Khin Win May, was able to visit him but she didn’t realize it would be her last time seeing her son. She said in an interview with RFA:

If I only knew it that day, I’d understand that would be the last time we saw each other. My son didn’t know that it was our last meeting either. He even asked me to bring some personal things on my next visit.

She added that her son was not a criminal:

My son was not a thief or a thug. I am proud of him for giving his life for the country. I’m really proud of my son. If I could get his ashes or remains, I would like to make a tomb for him and then put an inscription on it.

Myint Myint Than, the mother of executed activist Aung Thura Zaw, shared her grief in an interview with local journalists:

The pain is unbearable for me as a mother. I wish I had some way to express it. But I really can’t find the words to describe my pain.

Ko Hla Myo Aung was not able to meet a family member before his execution. His father-in-law, U Myint Oo, recalled their efforts to visit him in prison:

At first, he was held in Taungoo Prison. From there he was sent to Insein after the execution orders were confirmed. We went to Insein three times and every time, we were told that he was not there. We were not informed about his death. We could not see him for the last time before his execution.

The Assistance Association for Political Prisoners reported that at least 77 people are currently sentenced to death in Myanmar.