Family alleged that the activist was tortured 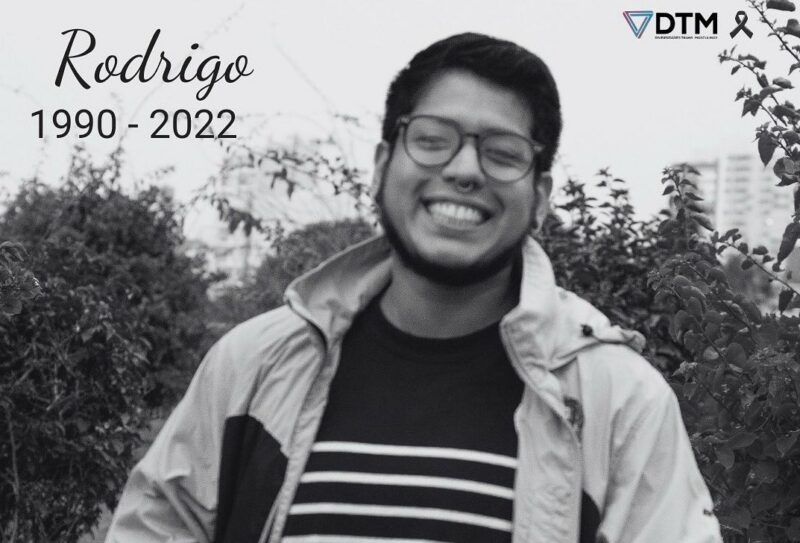 Rodrigo Venticilla Ventisilla passed away while in police custody in Bali. Picture courtesy of Diversidades Trans Masculinas. Used with permission.

A prominent Peruvian activist died in a hospital in Denpasar, the provincial capital of Bali, Indonesia, while in Indonesian police custody. The death of Rodrigo Ventosilla was announced by The Crimson, Harvard university's newspaper of record, where he was enrolled as a graduate student of Public Administration in International Development at the Harvard Kennedy School.

Rodrigo Ventocilla Ventosilla, 32, founded “Diversidades Trans Masculinas,” a Peruvian transgender collective. While traveling on his honeymoon, Ventosilla was arrested in Bali for drug trafficking on August 8. Local authorities found him in possession of an herb grinder and other items that allegedly contained marijuana and pills.

In 2020, the UN Commission on Narcotic Drugs officially declassified cannabis as a “hard drug” and began to recognize its medicinal with therapeutic potential. However, many countries continue to consider it harmful and carry harsh punishments for those in possession of the plant. Indonesia is one of the few countries where cannabis possession and trafficking may lead to capital punishment, even a death sentence.

The state news agency reported that after days of detention, Ventocilla was rushed to Bhayangkara Hospital, a medical facility managed by the National Police, for a stomachache and vomiting after allegedly consuming some of his personal medicine that was not confiscated by the police. With no improvement in his condition, he was then transferred to Sanglah General Hospital, where he was placed under intensive care and was pronounced dead on August 11.

The Crimson relayed Ventocilla Ventosilla’s family announcement alleging that gross misconduct and police violence may have caused his death.  The Bali police have firmly denied these allegations.

Through an official statement obtained by the press, the Denpasar District Police Public Communication Director Stefanus Satake Bayu Setianto said that the victim died after suffering liver and kidney malfunctions and rejected accusations that he was tortured while in custody and denied access to a legal counselor. Furthermore, the police claimed it has followed procedures and that Ventosilla's family refused an autopsy.

The Peruvian government initially called for an independent investigation into the tourist's death but has also made moves to defend itself against the family's accusations that the Peruvian Embassy in Bali hindered the family's attempts at getting answers. The Peruvian Foreign Ministry released a statement Wednesday, August 24, asserting its officials had “acted with due diligence,” adding:

The Consular Section of the Peruvian Embassy in Indonesia has been providing consular assistance and following up on the case, within the framework of its competencies and with respect for local laws, while maintaining uninterrupted communication with their families.

In response, Ventocilla’s family member, Luzmo Henríquez, said the ministry’s statement was “biased, insufficient and not very empathetic,” according to the Harvard Crimson.

In a Twitter thread, Australian queer activist and cofounder of the Queer Indonesia Archive, Beau Newham, highlighted the abuse suffered by Ventocilla.

For those who reminded me that drugs are illegal in Indonesia, I just want to remind you that violating the law doesn't mean that that person deserves to die in detention: extorted, isolated from loved ones, getting transphobic treatments, and banned from getting medical help. Just because it's a norm doesn't mean that this should be accepted.

For those saying it was JUST ABOUT DRUGS – Think about what happens to a trans person when they are arrested
How is a strip search done and who does it?
What gender jail are they placed in?
These globally these institutions are transphobic – and arrest makes you highly vulnerable

The Indonesian Constitution Chapter 28I on civil rights states that the government guarantees the freedom to live, free of fear from discrimination, but the application of this law is far from perfect. Transgender people are frequently subjected to prejudice, discrimination, and violent persecution. Despite the fact that numerous Indigenous communities in Indonesia embraced gender fluidity, such as the Bugis people, who acknowledge five unique genders, Indonesian officials are reluctant to acknowledge gender fluidity beyond the heteronormative binary.

Global Voices reached out to Andreas Harsono, an Indonesian human rights defender and researcher with Human Rights Watch, about the mistreatment of LGBTQ+ individuals in the country.

In general, the LGBTIQ persons in Indonesia are frequently mistreated by law enforcers such as the municipal police (Satpol PP). The most common cases happened among trans individuals.

Harsono also quoted the 2019 findings by Arus Pelangi, an Indonesian LGBTQ+ rights group, which showed that there are at least 45 anti-LGBTQ+ local and national regulations in Indonesia.

In recent years, there has been an uptick in crackdowns and mistreatment of the LGBTQ+ community in Indonesia under the pretext of protecting public order, according to Harsono.

In 2014, only Aceh, the only province that applied Sharia law, considers homosexuality a crime punishable by up to 200 public lashings, today, other provinces like West Sumatra, West Java and South Sulawesi are also criminalizing LGBTIQ community and individuals.

Through their Facebook page, Diversidades Trans Masculinas are calling for online and in-person protests in Lima to demand justice for Ventocilla. 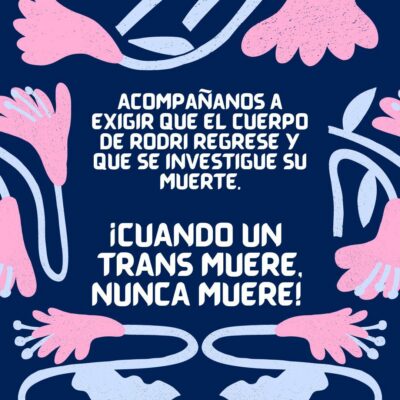 A poster demanding the return of Rodrigo Venticilla Ventisilla's remains be brought home and to open an investigation surrounding his death. Posted on Diversidades Trans Masculinas Facebook Page, used with permission.