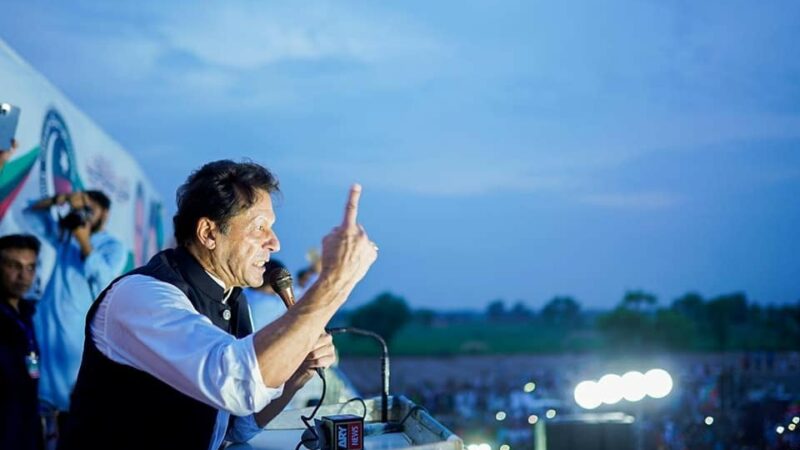 YouTube users started to experience service disruption across Pakistan [2] on the evening of Sunday, August 21, 2002, just as the former prime minister and chairman of Pakistan Tehreek e Insaf (PTI) party Imran Khan was to address a political rally in Rawalpindi, Punjab in a streamed speech. Khan was removed from office earlier this year by a vote of no-confidence in parliament, engineered by the opposition Pakistan Democratic Alliance. Since he came into power in 2018, he gained popularity with his narrative of the opposition being corrupt, his stance against the United States’ War on Terror [3], and his apparently anti-US mindset. His followers were largely anti-establishment and openly condemned the ruling government after he was ousted.

Historically, power in Pakistan has alternated between military rule and two political parties — Pakistan Peoples Party and Pakistan Muslim League-Nawaz. PTI gained power in Khyber Pakhtunkhawa (KP) Province in the 2013 elections and was re-elected in KP 2018, with a majority and Imran Khan became the prime minister. This was the first time a political party that was not run on dynastic politics came into power.

On the evening in question, NetBlocks, an internet monitor working at the intersection of digital rights, cybersecurity and internet governance, reported [4]:

⚠️ Confirmed: Metrics corroborate reports of a disruption to YouTube in Pakistan on multiple internet providers; the incident comes as former PM Imran Khan live streams on the platform despite a ban by media regulator PEMRA

On August 22, the internet was once again erratic. Netblocks announced that, within 24 hours, Pakistan was facing issues for the second time:

⚠️ Confirmed: #Pakistan [8] is again in the midst of a nation-scale internet outage, the second in 24 hours; the incident affects multiple providers including PTCL with real-time network data showing connectivity at 38% of ordinary levels 📉

This is not the first time the internet or a particular platform has been taken down in Pakistan. Earlier in April, the internet was shut down [11] across the country after Imran Khan held a political rally after being ousted from power. During Muharram, when large numbers of processions happen across Pakistan, internet and mobile services were shut down [12] on the pretext of security concerns. YouTube was banned in Pakistan in 2012 when a movie that contained content considered blasphemous was put online. Three years later, the ban was removed [13] when YouTube set up local jurisdictions, and governments could remove content as they wished.

As soon as people were unable to access the live stream of the PTI rally on August 21, they started complaining on social media platforms.

This is outrageous arbitrary censorship which @PTAofficialpk [16] @GovtofPakistan [17] must explain. No law allows political censorship of online platforms @SalmanSufi7 [18] https://t.co/bVHF6Z8Y0X [19]

Hashtag #UseVPN [21] and #YouTubeDOWN went viral when people were unable to live stream.

Erum Zaeem, a journalist said that this was the worst form of censorship:

This is 2022
Pakistani’s are facing worst form of media censorship and ban on Freedom of Speech#PDM [26] Thugs your time is over pic.twitter.com/p0yVKn0zW7 [27]

After the speech, Imran Khan strongly criticized the government for temporarily taking down YouTube and blocking access to his speech:

The fascist Imported govt sunk to a new low today by banning live coverage of my speeches on TV & then blocking YouTube temporarily during my speech at Liaquat Bagh. All this after continuous intimidation of mediapersons & taking channels off air earlier.

This is not only a gross violation of freedom of speech but also negatively affects the digital media industry and the livelihoods of many. What they need to understand is that no matter what they do, they cannot suppress the will of the people which is Haqeeqi Azadi.

This disruption comes right after the Pakistan Electronic Media Regulatory Authority (PEMRA [41]) issued a ban on broadcasting Khan's live speeches [42] on all satellite TV channels. The day before the rally, Khan threatened that PTI would file cases against the leadership of rival parties, the Islamabad's Inspector General Police and Additional District and Sessions Judge Zeba Chaudhry. After the ban, PTI invited followers to watch Imran Khan's speech on YouTube:

Imported Fascists are trying to ban Imran Khan's speeches on TV. Please subscribe to our YouTube Channel at https://t.co/pzk3rQp3du [43]

They have lost the battle completely and now using fascism; they will fail! #HelpPakistan [44] by raising your voice against fascists!#WeCantBreathe [45] pic.twitter.com/ozC8Nu7FvB [46]

Important to note that orders of @reportpemra [48] do not apply to web platforms including YouTube.
This is arbitrary political censorship by @PTAofficialpk [16] which is the internet regulator. This does not fall under PTA’s powers to censor content under Sec 37 of PECA, because:
(1)

1. Social media rules (under sec 37 of PECA) are pending revision by Parliament on order of the Islamabad High Court May 11, 2022.
2. The (unconstitutional) rules introduced by PTI Govt require platforms to delay livestream on its directions but this system is not in place.
(2)

@PTAofficialpk [16] is answerable as to under what law was YouTube blocked, and reports indicate it was functional on some ISPs and not on others.

This is the first time Imran Khan's speech has been taken off the air and blocked on YouTube. In 2015, Muttahida Qaumi Movement (MQM) chief Altaf Hussain's speeches and pictures were banned [59] by Lahore High Court for his “anti-army” remarks. In 2020, PEMRA banned former prime minister Nawaz Sharif's fiery speeches from London [60] against the PTI government, the judiciary and the military.

This is a direct violation of freedom of speech and the right to information under articles 19 and 19(a) of the Pakistani Constitution, but, over the years, the situation has deteriorated, and people are unable to speak up without fear of being penalized.