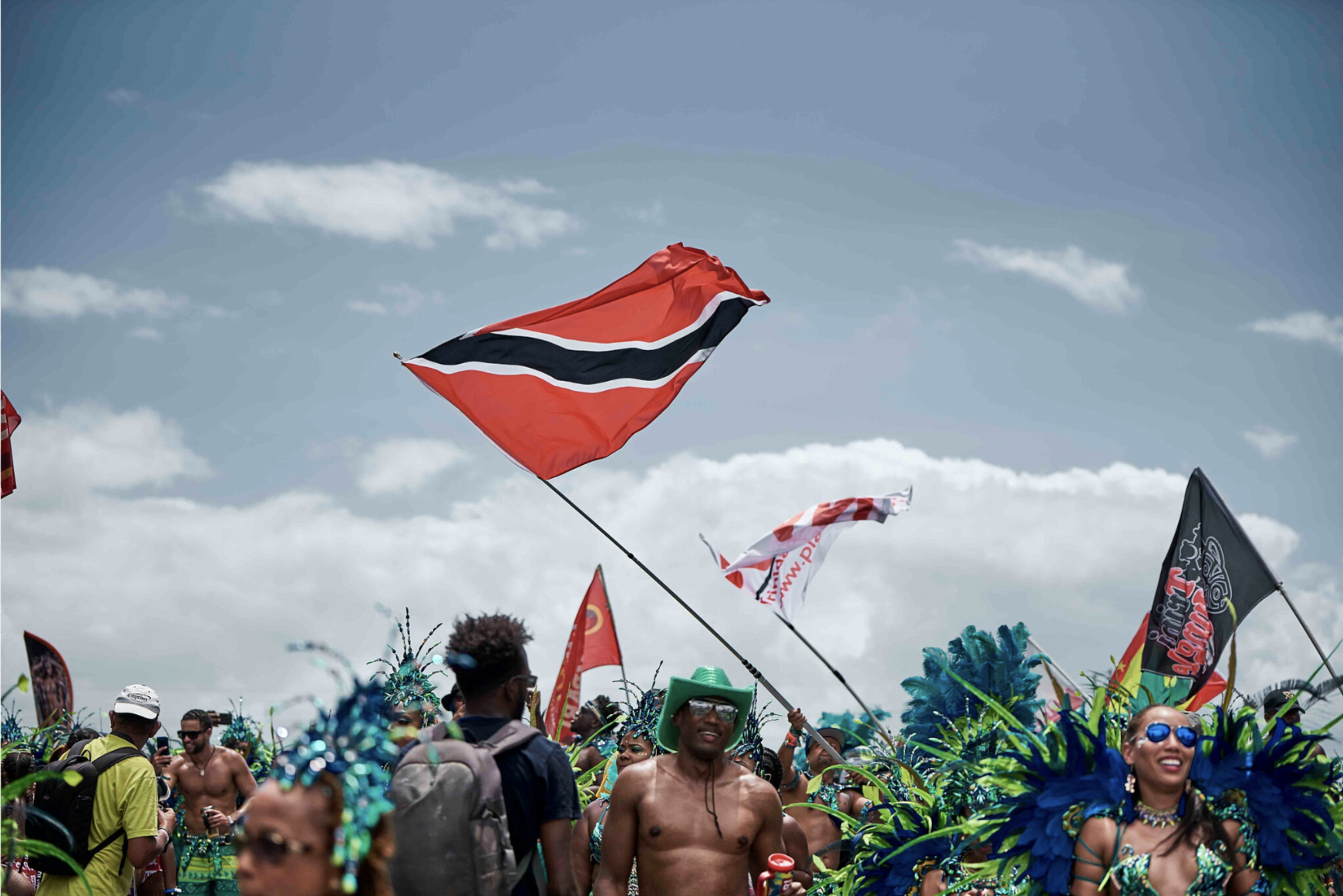 Members of a “pretty mas'” band on Carnival Tuesday in Trinidad and Tobago as a masquerader waves the national flag. Photo [1] by Jason C. Audain [2], used with permission.

The annual Carnival celebration [3]s in Trinidad and Tobago are always preceded by great anticipation, a major element of which involves deciding which masquerade band you will be playing with for the two-day street parade, and choosing a costume in which to do so. With the COVID-19 [4] pandemic having shut down Carnival celebrations for both 2021 [5] and 2022 [6], excitement for the 2023 event has been growing — as have the prices associated with it, particularly in the costume department.

The masquerade band Ronnie and Caro explained [16] their 2023 costume breakdown in a Facebook post. The cheapest “backline” costumes, which cost [17] TTD 3,995 (just under USD 600), are at “the most affordable end of the price spectrum” because they are “lighter” and “easier to dance in.” The “frontline” option offers [18] more elaborate costumes; these masqueraders usually enjoy preferred spots towards the front of each section when the band is ready to take the stage. Finally, the top tier “individual” option caters for custom-designed costumes, complete with a personal assistant — other bands use a truck designated for this purpose — who will “assist in carrying the heavy parts of their costume” on Carnival days.

Some Carnival enthusiasts argue that the price of costumes is high because bands need to offset many of the elements involved in creating a full and enjoyable on-the-road experience. As the Harts Carnival website pointed out [19], the cost includes the provision of customer service, a swag bag, music trucks and DJs to provide a danceable soundtrack for the street parade, washroom amenities, a “Cool Zone” to refresh yourself, security and paramedic services. However, Boisselle was surprised to discover [20] that “the standard […] package does NOT include alcohol” — the provision of drinks adds another TTD 600 (USD 89) to the price of your costume.

Many fans of the festival accept that costumes for women are expensive because they are more heavily embellished than the men's. This was not always the case; portrayals by band leaders like George Bailey [21], Wayne Berkeley [22] and Stephen Lee Heung [23], which thrived from the 1950s to 1970s, were lavish affairs. Male masqueraders often dressed in full body armour and headpieces to represent worlds like the Roman empire, Africa, China, or India.

The rise of the “party band” in the 1980s and beyond focused less on portrayals and more on fun, which led to the male costumes, in particular, becoming quite basic, often nothing more than a pair of shorts, some attachments that might include wrist, ankle or headbands, or perhaps an embellished collar. Therefore, when Boisselle saw that a male costume for the Bliss Carnival band was being sold [24] for TTD 4,995 (USD 799), and contained simply board shorts, a branded tank top and cap, she exclaimed [25]:

This alone tells me that people have gone off the deep end.

The large discrepancy between the cost of materials and the retail price prompted Nancy Janell to comment [26]:

They can not be serious. I think they know the carnival people [were] so suffering in the past 2 years [of the pandemic] that 2023 they want to make back what they lost and there are people who will pay it 🤦‍♀️

Damn, I just donated a setta pants and vests!!!!! Didn't realise the value I gave away!

In another Facebook post, Boisselle shared [28] images of a female costume in the same band, Bliss Carnival. The frontline costume price was TTD 7,395 (USD 1,183), with additional fees ranging from USD 176 to 719) for “upgrades,” in addition to which Boisselle noted:

And if you want to be frontline section leader, which is the first costume shown, you have to email to [find out] how much you have to add to the basic [TTD] 7,400
Nice man…nice 😳😳😳😳

So … the $7,400 basic frontline is essentially a backline with better marketing.

Whatever them/he smoking I want some of it too. I feel it made up of audacity and weed.

By the time Boisselle shared a similar costume from another band, with a similar price structure and “upgrade” scheme, she was quoting [31] a famous Sesame Street song [32]:

Cause L is such a lovely letter for words like ludicrous

Facebook user Denny Ablack, however, summed up the whole phenomenon on a far more serious note by posting [37]:

While the art of the meaningless band costume had long been perfected, costs of production had always reduced profit margins unnecessarily. This minimalist solution retains the same lack of meaning, while increasing the profits significantly.

The reality is, however, that most Carnival bands, having taken a cue from Tribe, which Forbes called [38] “Trinidad's trendiest Carnival band,” offer all-inclusive experiences. In a 2015 interview with the magazine, Tribe's CEO, Dean Ackin, explained [38]:

[I]t was putting all the amenities together and creating a package, so that we provide the ultimate experience: anything you might need while dancing in the streets for Carnival for two days we provide for you. Ultimately it gave us something new that ended up shaping Carnival in the country in a big way, because now almost all the bands are all-inclusive. We set the tone and the benchmark for what Trinidad Carnival has become.

Ackin, who also owns other large party band brands like Harts and Bliss, told [38] Forbes that Carnival is “not just about making money […] We are contributing to a culture and a legacy.” When asked about “the Carnival grinches” lamenting that the festival “has devolved from something cultural into the generic beads-and-bikini party vibe,” Ackin noted [38]:

We created a Tribe spinoff band, Lost Tribe […] See, for quite a while Trinidad Carnival and its costumes have been evolving, but evolving in such a way that the older school of design wanted to get back to the original costumes and themes. And we felt there was a place for that, for costumes that were more thematic than bikini and beads, more craft and design […] the costumes are made with a lot more fabric and they are larger and they stick to an artistic and beautiful theme.

In speaking with Global Voices by telephone, however, Boisselle disagreed that the direction in which Trinidad and Tobago Carnival is heading is “evolution”:

I'm into costuming and representation. Designers will counter that the new genre of costume is abstract, or an allusion to its subject, and they're entitled to that — it's their intellectual property. I'm not telling anyone not to play mas’ or how to spend their money, and I understand that bands need to pay for trucks and music and other necessary elements to create a good experience, but I as a consumer will exercise my right not to purchase, a right which extends to all consumers of good and services.

She is not a Carnival scrooge either: Queen of Carnival costumes, depending on how ornate they are, can range anywhere from TTD 30-120,000 (USD 4,400-17,647). In addition, feathers, which feature in most of the costumes in question, are an expensive material, even more so since the pandemic disrupted regular supply chains. Still, Boisselle maintained, “the maths not mathsing”:

Sean Emamdee, a member of the Trinbagonian diaspora, is a longtime Carnival aficionado who has played individual costumes with Bliss since the band's inception. On a WhatsApp call, he told Global Voices:

To me, it's worth it. I indulge in my culture once a year, and I prefer to pay more for a costume that I feel gives me more bang for my buck. Yes, prices, including airfare and accommodation, are going up, but you can't put a price on memories. I have a great time, and I don't have to leave the band for anything.

He does acknowledge, however, that with age, people's priorities shift:

A lot of my friends who are homeowners, or parents, or both, are now choosing to take a family trip or do house upgrades rather than spend it on a two-day Carnival experience.

In a free and open market, masqueraders have the right to participate in the festival in whichever way they choose. Once the demand is there, prices may well continue to escalate as band leaders try to find ever more innovative ways in which to enhance the Carnival experience. As Boisselle acknowledges, “Those who love that type of mas’ can say so — and patronise it — and those who don't appreciate it can express their feelings as well, once it's done respectfully.” That tolerance and togetherness, despite differences, embodies the spirit of Carnival.