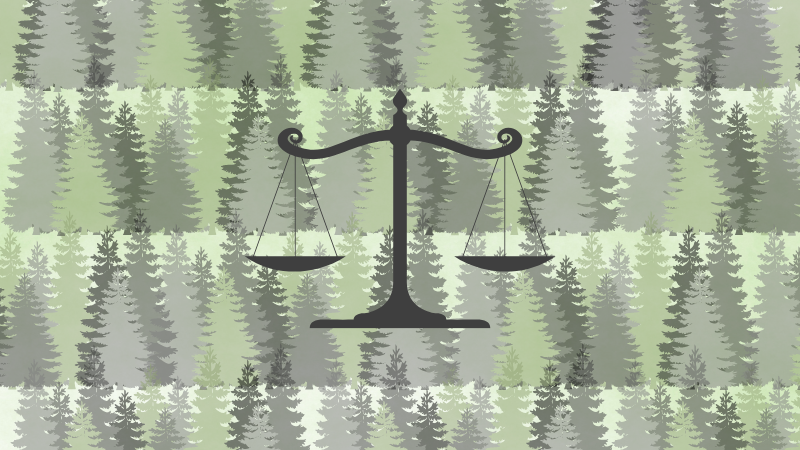 The month of August is celebrated as the month of Pacha Mama, or Mother Earth, among some Indigenous peoples in Abya Yala, today known as the Americas. In the context of the climate, environmental and human crisis worldwide, it seems timely to highlight narratives other than the hegemonic ones on our relationship with the environment. Debates are taking place in Latin America on how to consider nature in the judicial sphere: Is it an object or a subject of law? Is it a natural resource or a collective subject of public interest? Does it have an inherent value or does its value depend on its usage by human beings?

Fernanda Sánchez Jaramillo is one of the people from Colombia who wants to encourage this discussion. She is a journalist, a lawyer with a master's degree in international relations, a doctoral candidate in law, and a researcher at the prestigious Universidad del Rosario in Bogotá. She also contributes to Global Voices, always with a focus on human rights. She wants to walk in the footsteps of her father, who was a social leader and community organizer of the peasant movement in Colombia.

Sánchez Jaramillo strives for the judicial system in Colombia — and around the world — to break away from “Eurocentric” conceptions and open itself to other ways of looking at life and justice. Earlier this year, she wrote an academic paper entitled “The kosmovilidad of mother earth when she ‘speaks’ and the legal discourse on ‘nature’” together with Willian Jairo Mavisoy Muchavisoy. In the paper, they share their research and reflections on the outlook of the Indigenous peoples Awá and Kamëntsá of southern Colombia, and how these perspectives can contribute to nurturing Colombian laws and the country's judicial doctrine.

For example, the Awá people call mother earth Katsa Su (“Big House”), a conception that incorporates all the “relationships established with her and with the other beings who share her existence.” In this way the Awá people “demonstrate that there are ways of interacting and living in harmony other than colonizing mother earth and treating her as an object of consumption (natural resource, common heritage, good, capital, ecosystemic services, raw material) and breaking the original human-non-human tissue (the hills, animals, vegetables, stars),” Sánchez Jaramillo and Mavisoy Muchavisoy explain in their article.

The following interview is based on the investigative work by Sánchez Jaramillo.

Melissa Vida (MV): What motivates you in your many undertakings?

Fernanda Sánchez Jaramillo (FSJ): My commitment to the social purpose of my two professions, journalism and law, as well as the need to promote knowledge, places, and people that have been traditionally excluded. I am also motivated by an immense love and passion for the knowledge that I found not only in books, but in the beings I met and the experiences I had during my many years of career. And also by looking at the world with curiosity, respect, and responsibility. I think I try to follow, to some extent, my father's commitment to communities and to justice.

MV: What is your current Ph.D. research focused on?

FSJ: My Ph.D. thesis is about the potential connection between nature as a subject of law and the protection of Katsa Su, Big House, of the Awá people in Nariño [a department in southeastern Colombia]. It is a deep dive into a question that surfaced when I was working on my legal article, which will be published, and which led me to delve into what it means to be a subject in the legal sphere, and what it means to be a being for the Awá. It follows the work I did on the animals and their rights, since in both cases I study the possibility that other living beings are considered as rights holders. I am passionate about the rights of mother earth, animals and native peoples, and the acknowledgement of other subjectivities.

MV: Why is this topic important and relevant in the environmental and human rights context of Colombia?

FSJ: It is important because it attempts to effectively protect nature by focusing on nature's rights, from various fronts, which environmental law has not achieved despite the many existing norms in a country like Colombia. With regard to human rights, this issue is relevant because the Special Jurisdiction for Peace recognized in 2019 that both Katsa Su and the Awá people were victims [of the armed conflict in Colombia that began in the 1960s], and it is necessary to analyze whether the decision has had a positive impact on the Awá people and their land since then.

MV: What is “legal colonialism”?

FSJ: Legal colonialism has its roots in Eurocentric thought and in the myths of modern law, as highlighted by law historian Paolo Grossi. The Colombian legal system is part of what is known as the continental law system. It has inherited its institutions and its sources from it, and even our civil code was “copied” from the Napoleonic Code. We have received the laws rather than produced them. The colonialism of legal discourse is marked by binary thinking, which excludes and separates. For example, there is a predominant dichotomy between who is the object and who is the subject, which are key concepts in my academic research. It is also reflected in how socio-environmental issues are handled.

MV: What is the difference between how the Awá and Kamëntsá peoples see their environment and how it is seen from the West?

FSJ: The main difference lies in the fact that for these peoples everything that lives is “people.” That is to say, that the dichotomy imposed by modernity and colonialism does not exist for them. They view themselves as part of a whole, and the beings with whom they share their home are considered people, who can feel, who can bleed, who can help, but who can also punish if they are disobeyed or disrespected. They have lived in communion with these beings for centuries and they continue to live in harmony with them. They see their surroundings as a mother, not as a natural resource to be exploited at their convenience, and they practice reciprocity.

MV: What impact could these perspectives have on how the world is perceived?

FSJ: The impact they have had is big. Thomas Berry, a pioneer in land rights defense, was inspired by the thinking of Indigenous peoples; the Wild Law Manifesto. [Lawyer] Cormac Cullinan also echoes many ideas that exist among indigenous peoples not only from Abya Yala, but from all over the world. Nature's rights are inspired by the thinking and traditions of Indigenous peoples. As such, they have been influential in creating other ways of being in the world, but they clash against the power of transnational capitalism that seeks to maintain the status quo and keep nature for sale.

MV: How would you like to see the future of Colombia's judicial system?

FSJ: Not only in Colombia, but in the world. I believe that we need a legal system that takes into account the land that we share with multiple beings, such as rivers, forests, other animals, and that includes in the legal analysis the knowledge of the ancestral peoples that have been excluded throughout time because they were deemed non-scientific. Law is a social and cultural construct that cannot be kept unchanged. It must respond to the needs of its time; we cannot turn to only nineteenth-century law to understand the world or to organize it. I would like a system where justice is done, where laws and knowledge produced elsewhere are incorporated, as well as an intercultural legal narrative.