'If you want to destroy a community, take away its green space' 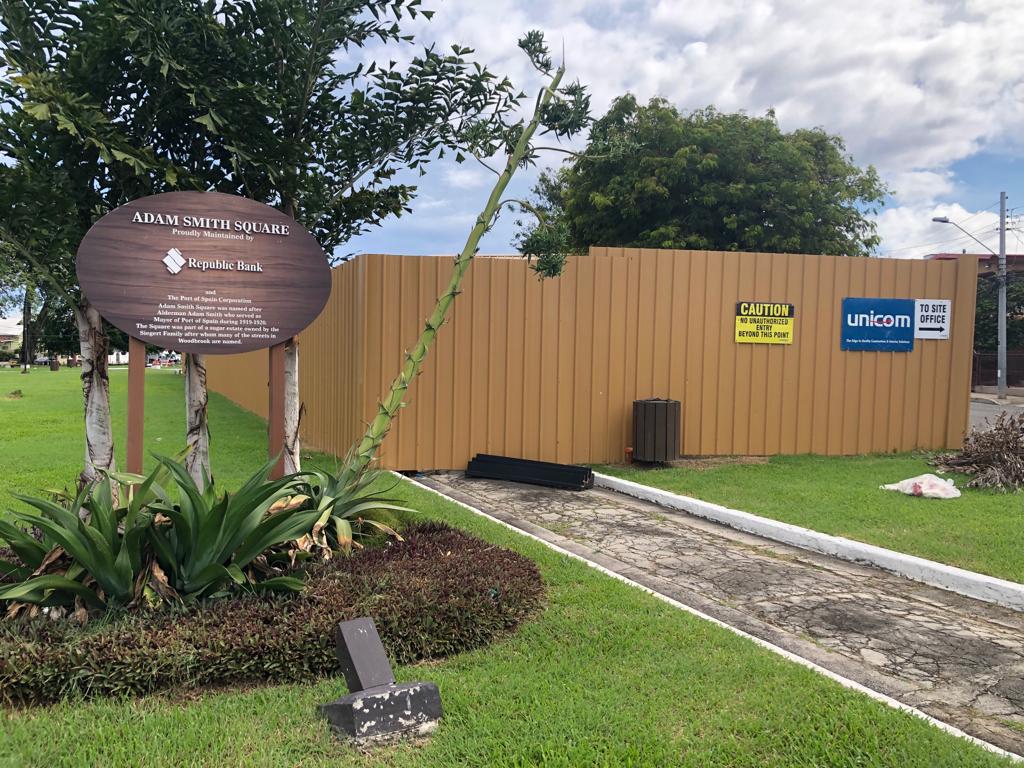 A photo of Adam Smith Square showing the hoarding around the construction site, used with permission.

“If you want to destroy a community, take away its green space.” That's the title of a Change.org petition aimed at halting the proposed construction of a new municipal police station to be located on the grounds of a public park, Adam Smith Square in Port of Spain.

Member of Parliament for Port of Spain South Keith Scotland, who is involved in the initiative with the support of Minister of National Security Fitzgerald Hinds, said that the project would not proceed without consulting the surrounding community of Woodbrook. However, there is heavy equipment on site and hoarding has already been erected — without any corresponding signage or related information — leaving many residents to deduce that any so-called consultation would be as weak and desultory as past iterations with other public parks, where projects were only halted after public outcry.

IF YOU WANT TO DESTROY A COMMUNITY, TAKE AWAY ITS GREEN SPACE. https://t.co/ICdSlyiZS2 via @Change

As if to confirm that perception, Scotland told the Trinidad and Tobago Guardian, “We are engaging the residents; there are eight residents on that stretch […] I have spoken with all of them and we are working on it to see what the solution can be.” Such an approach quickly led a few social media users to speculate that the project was primarily being done for profit.

The project aims to increase police presence in the hope of decreasing crime and also forms part of a controversial concept to turn Ariapita Avenue, which runs along the square's northern perimeter, into a tourist and entertainment destination. The first phase comes with a price tag of TTD 15 million (USD 221,251). Apart from the police post, it will reportedly include signage and arches, textured sidewalks, shuttle stop points, a cycle track, garbage bins, electronic bollards, enhanced street lighting, public washrooms and landscaping. Phase 2 includes the construction of two four-storey car parks.

Facebook user and avid outdoor fitness enthusiast Denise Demming was not distracted by the promises. Making the point that there are already as many as nine police stations within a one-mile radius of Adam Smith Square, and more than twice that number within a two-mile radius, she said:

[…] 15 million dollars ought to be invested in people, not in infrastructure. We keep building infrastructure and not investing in people. We keep forgetting that no matter how much infrastructure you have, if the people aren't engaged and committed, things will not work.

In 60 short years, citizens have allowed the gradual encroachment on the lungs of Port of Spain. Now the Government has trained its construction guns on Adam Smith Square and we don’t know which other green spaces. Barbados has Garrison Savannah, London has Hyde Park, New York has Central Park. We must ensure that our parks and green spaces are preserved.

Trinidad and Tobago celebrates its 60th anniversary of independence from Britain on August 31.

Many other Facebook users were baffled by the proposal to construct a police post at the park, and shared a Google Maps image illustrating the close proximity of the Woodbrook Police Station, which is within easy walking distance of Adam Smith Square. The square itself has long been a hub of community life in the area as a green space for play, relaxation and socialisation, as well as a hub at Carnival time when it is transformed into a key judging point along the parade route and a venue for traditional masquerade competitions.

The square also has historical significance. Ian Lee, the oldest living member of one Chinese immigrant family whose home was located on nearby Carlos Street, which runs parallel to the western side of Adam Smith Square, remembered what life was like in the midst of World War II:

It was 1940s, the early war years, and Adam Smith Square across the avenue was littered with dozens of 6 ft deep air raid trenches. At night we would hear the sirens, then the searchlights would come on searching the skies for the nonexistent enemy planes.

The Facebook page Friends of Nelson Mandela park, another public park that was recently a target for “revitalisation”, shared an album detailing the progress on Adam Smith Square, which helped to confirm that work had already begun, despite the lack of proper community consultation.

Interviewed about this, Port of Spain mayor Joel Martinez responded by saying, “Nobody [wants] a police post, [but] everybody wants crime to be solved.” Minister of Tourism Randall Mitchell, meanwhile, said that the project would bring increased economic benefits to the area.

Regardless, social media users stood firm on their priorities, which Facebook user Kathryn L Chan succinctly summed up in one sentence:

Encouraging people to sign the petition to halt the construction work on the square, Public Space Global explained:

Public spaces are under threat. Seemingly well intentioned infrastructure and building projects are often prioritised over the maintenance of green spaces, and the vital social, cultural and ecosystem functions they serve.

Often when there are other green spaces located within an area, there is less importance placed on preserving ALL green spaces, and consultation with residents and users in and around the space is forgone.

What are they planning to do with the square?! Everywhere in the world they’re trying to preserve green spaces and rewild concrete jungles!

Noting that the residents of Woodbrook are demanding proper consultation, a peaceful protest is scheduled for 4:00 p.m. local time on August 19 to save Adam Smith Square and advocate for better protection of the country's green spaces.

Prior to the protest's start time, Minister of Housing and Urban Development Camille Robinson-Regis issued a press release — widely shared via WhatsApp — confirming that she has discussed “the plans for the revitalisation of Port of Spain, specifically the upgrade of Ariapita Avenue and some areas of Woodbrook,” with Ministers of Parliament Mitchell and Scotland:

Despite having already held five Consultations with Stakeholders on the Ariapita Avenue and Woodbrook Revitalisation works, I have taken note of the recent concerns of a group of Woodbrook Residents on the work proposed for the Police Post and the bathroom facilities. It is clear that we need to have further consultations as there still seems to be some misunderstandings, particularly in relation to the proposed works for Adam Smith Square.

Her statement promised to “arrange to have another meeting at the earliest convenience with these residents to try and alleviate their concerns.” Work on Adam Smith Square has been halted pending this meeting, although “upgrades to the sidewalks, lighting and general street scape” will continue.