A glimpse into Uzbekistan’s internal disputes over reform 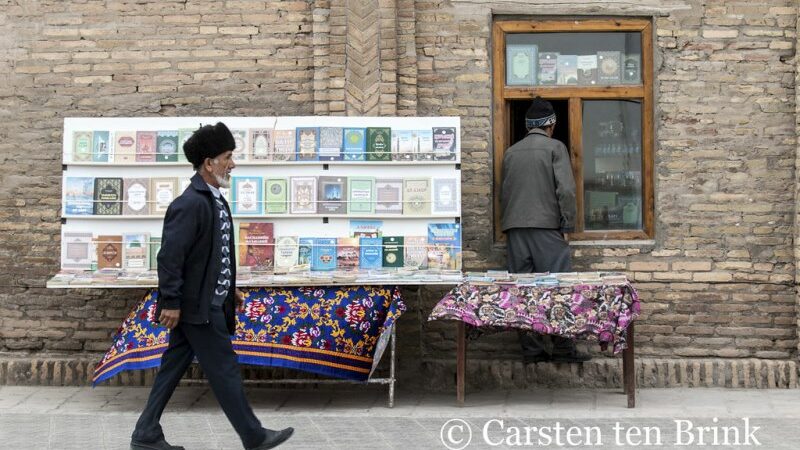 A view of the Khiva market outside the East Gate of the old city. Photo by Carsten ten Brink via Flickr (CC BY-NC-ND 2.0)

Since its independence following the collapse of the Soviet Union, Uzbekistan, a country of over 30 million, has largely been closed off to the world. While it became a major tourist destination for Europeans thanks to its historic cities, Samarqand, Bukhara, and Khiva, many of the country’s people had limited access to non-state media and few opportunities to travel abroad. Only in 2019, for instance, did Uzbekistan finally abolish its exit visa system, which required citizens to receive a visa from the Uzbek government simply to leave the country. Under Uzbekistan’s first president, Islam Karimov, who served in that capacity from 1991 until his death in 2016, the government tolerated no opposition nor public debate on issues critical to the country. Since 2016, the new Uzbek president Shavkat Mirziyoyev, an unexpected compromise candidate between powerful factions in the country, has styled himself as a reformer, at least economically. He has opened Uzbekistan to foreign businesses and tourists by ridding the country of the official government exchange rate, and limited once-ubiquitous police surveillance.

As part of efforts to encourage tourism, Mirziyoyev has promoted various cultural festivals in partnership with international artists and litterateurs. In 2021, to promote Uzbek culture abroad he revived the Soviet-era Tashkent International Film Festival under a new name, The Pearl of the Silk Road. The Mirziyoyev-approved Silk Road Literary Festival, an event intent on showcasing the literature and sightseeing possibilities of Central Asia to the world, was planned for September 2022. The festival was to be held in the Uzbek cities of Tashkent and Bukhara and was one of few large international events in the region since independence to put literature at center stage. Mirziyoyev tasked the Uzbek Ministry of Foreign Affairs, the Ministry of Tourism, and the Uzbek Union of Writers (UW) with helping facilitate events in Uzbekistan for the festival committee, which was made up of Western-based financiers and cultural figures. Events would have featured lectures, public fora, and walking tours from litterateurs, artists, popular celebrities, and translators from the region and abroad.

However, on July 8, 2022, the festival was unexpectedly postponed. As director Sophie Ibbotson explained to stakeholders, the Uzbek UW unilaterally exited its partnership with the festival committee and a replacement could not be found in time to hold the festival as planned. It will now be held online with another set of events to follow in 2023. On July 12 the UW, rather oddly, chose to air publicly a series of grievances about the festival committee’s activity that actually divulges more about the UW’s anachronistic desires than it does any malfeasance by the committee. With its complaints, the UW demonstrated that it remains a Karimov-era institution in a Mirziyoyev-led Uzbekistan.

Karimov’s Uzbek state was a jealous one: it brooked no challenge to its monopoly on citizen loyalty. It vigorously persecuted any person or institution that might present an alternative patronage to ordinary Uzbeks. Perhaps the best-known example of this is the arrest of the 23 members of the philanthropic organization of businessmen, Akromiya, in Andijan in 2005, which eventually resulted in a jailbreak, an angry demonstration, and a bloody state repression of protesters. The state had labelled Akromiya an Islamic terrorist group, but the real threat it presented was an alternative locus of loyalty, as shown by Andijani support for the group. The Uzbek UW under Karimov and even now, despite Mirziyoyev’s loosening of state control, remains a jealous institution. It jealously guards its monopoly power to define the bounds of Uzbek literature, who advances in it, and who is an outsider. While the UW’s July 12 grievances may be post-facto justifications for some mundane failure to cooperate with the committee — we may never learn the real reason — the explanations listed speak to the UW’s continuing Karimov-style need to control the field. 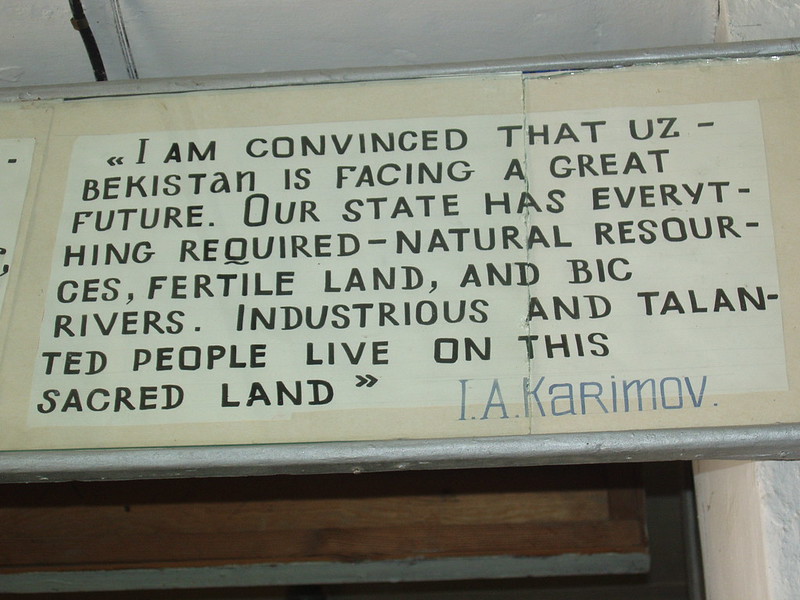 A banner in Bukhara with an English quote by the former president of Uzbekistan Islam Karimov. Photo by Lyalka via Flickr (CC BY-NC-ND 2.0).

The UW's grievances revolve around a single question: what is regional and/or Uzbek literature and who has the right to define it? Should it be the festival committee, that wants to emphasize those aspects that might be interesting to foreign audiences or empower voices outside the UW, or the UW, that looks to promote abroad, regardless of foreign tastes, their own vision of literature and their own people?

The UW begins by alleging that the festival program primarily featured “non-literary” events. These included, according to the UW, “Cultural Repatriation and Honoring the Past,” “Archaeological Narratives and the Spread of Buddhism in Central Asia,” “The Future of Travel,” “Nature as a Muse,” and “A Meeting with Nikita Makarenko” (where possible, I have given the English-language version of these events instead of a translation of the UW’s Uzbek rendering of them). These events certainly are not only about literature, but about culture more broadly, and specifically about the aspects of Central Asian culture that might interest foreign audiences.

The UW, on the other hand, listed as acceptable only a series of events that are born of a narrow, officially (UW) defined understanding of literature. The UW proposed talks around fields into which UW sections are organized, such as poetry, screenwriting and adaptation, historical fiction, environmental writing, etc., and led only by senior-most members of the UW, such as Usmon Azim, Xurshid Do‘stmuhammad, Erkin A‘zam, Isajon Sulton, and Muhammad Ali. The comparison of these institutionally powerful figures with Makarenko, the independent Russian-language blogger and social media personality, is telling. The UW claims as legitimate Uzbek literature only material produced under its auspices and patronage, while cultural activity outside the UW cannot be considered representative. 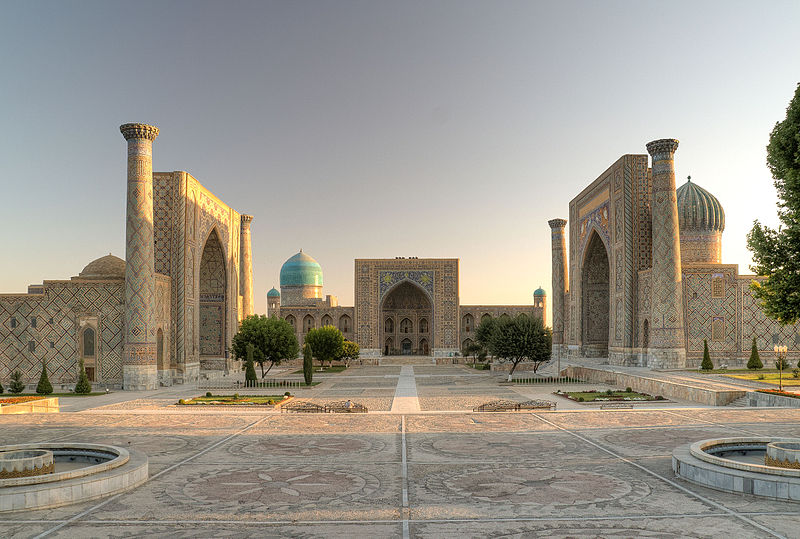 The UW’s right to dictate the festival’s understanding of literature is an argument to which the July 12 statement continually returns. In contesting the participation of a Tajik translator from English, the UW asserts that:

Just as Makarenko was unrepresentative of Uzbek literature, so too is the Tajik translator — who the UW does not name — not worthy of speaking at a festival held in Uzbekistan, even if that festival bears the name “Silk Road Literary Festival” and not “Uzbek Literary Festival.”

The UW statement also demonstrates an anxiety that the festival committee plans to disrupt the UW-controlled system of patronage, allowing younger writers accolades out of turn. The UW argues that “well-known litterateurs and translators were left out, while a few young translators were given complete responsibility for two or three events.”

Through its withdrawal, the UW shows that it will not relinquish its long-held monopoly on Uzbek literature without a fight. Given the support for the festival from Mirziyoyev and other more powerful institutions’(the MFA and the Ministry of Tourism), it is likely that the UW will in some way suffer for its refusal to cooperate. But, in the long term, in an Uzbekistan that seems increasingly open to the world, the UW will be made to recognize other voices in the literary field.