Solidarity protests were held in Chiang Mai and Bangkok 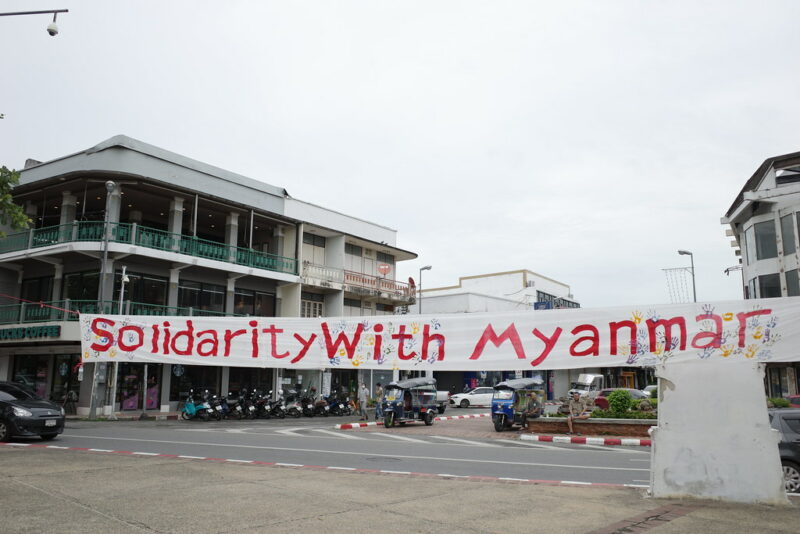 Thai and Myanmar activists and artists gathered in Chiang Mai, Thailand, on Monday, August 8, to commemorate the 34th anniversary of the 8888 Uprising and protest the Myanmar junta’s violence against the people, while a performance artist staged a solo performance in front of the Myanmar Embassy in Bangkok on the same occasion.

The 8888 Uprising was a series of protest marches in Myanmar in 1988, beginning with protests organized by university students against the government under General Ne Win, culminating in a general strike and mass demonstrations from students, Buddhist monks, and citizens on August 8, 1988. Protesters were fired upon by the authorities after General Ne Win ordered that “guns were not to shoot upwards,” resulting in a large number of casualties.

On Monday, August 8, Thai activists and the Myanmar community in Chiang Mai gathered at the Tha Pae gate, a famous tourist landmark, to commemorate the 34th anniversary of the protests, as well as to protest the violence committed against the people by the current military junta under General Min Aung Hlaing and pay tribute to the four pro-democracy activists recently executed by the junta.

Many of the attendees criticized the lukewarm political responses of the Association of Southeast Asian Nations (ASEAN) block, arguing that the block failed to adequately protect Myanmar citizens or stand up to the military junta. In the two years since the coup, ASEAN has struggled to navigate the situation in Myanmar and has repeatedly failed to reach a consus with its 10 member states around what action to take.

During the event, Thai and Myanmar activists read poems and gave speeches. Artists also staged a performance to reflect the ASEAN community’s silence about the current situation in Myanmar. Before the conclusion of the event, participants held a candlelit vigil to remember the August 8, 1988 uprising and those who died because of state violence committed by the current junta. 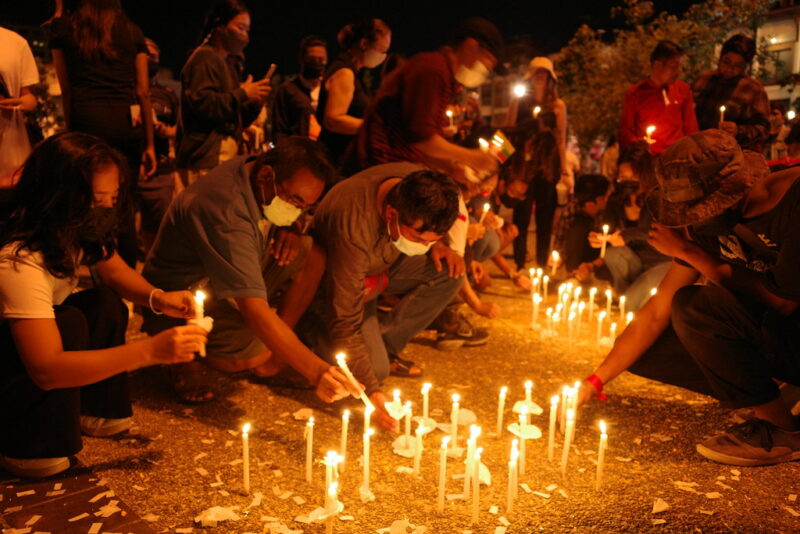 A candlelit vigil at Tha Pae gate in Thailand. Protestors commemorated the 34th anniversary of the 8888 Uprising. Photo from Prachatai. Used with permission.

Earlier on Monday morning, performance artist Nontawat Machai from the performance art group Lanyim Theatre staged a solo performance in front of the Myanmar Embassy in Bangkok to commemorate the 8888 Uprising and call for democracy in both Thailand and Myanmar.

Nontawat said he disagreed with the suggestion that Thailand should not interfere with what goes on in its neighbouring countries, and that because everyone is human, one cannot stand aside and let people be killed, even if it’s happening on the opposite side of the world.

I don’t care what people will say, or why you should meddle in other people’s affairs. Actually, this is not about national borders. I see them as living human beings like us.

Nontawat said he wanted to call on people to speak out, rather than do nothing, because if there is no action, people will not be able to escape the cycle of dictatorship. He also said he believes that it is still possible for the people to bring about change, but it takes much perseverence.

“This is a lesson that if there is not yet a force, or if the force is still small, we’ll keep going. I think that’s more our focus. Being disappointed that we have no power and losing hope, for me, I haven’t felt like that. There is still hope,” he said. 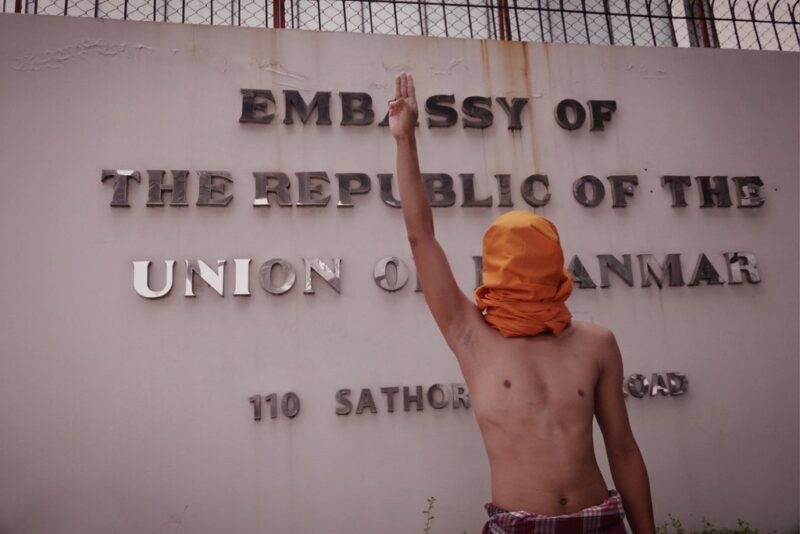 Nontawat Machai during his performance at the Myanmar Embassy in Bangkok. Photo from Prachatai. Used with permission.