Anti-Russia sentiment is growing among the Georgian public 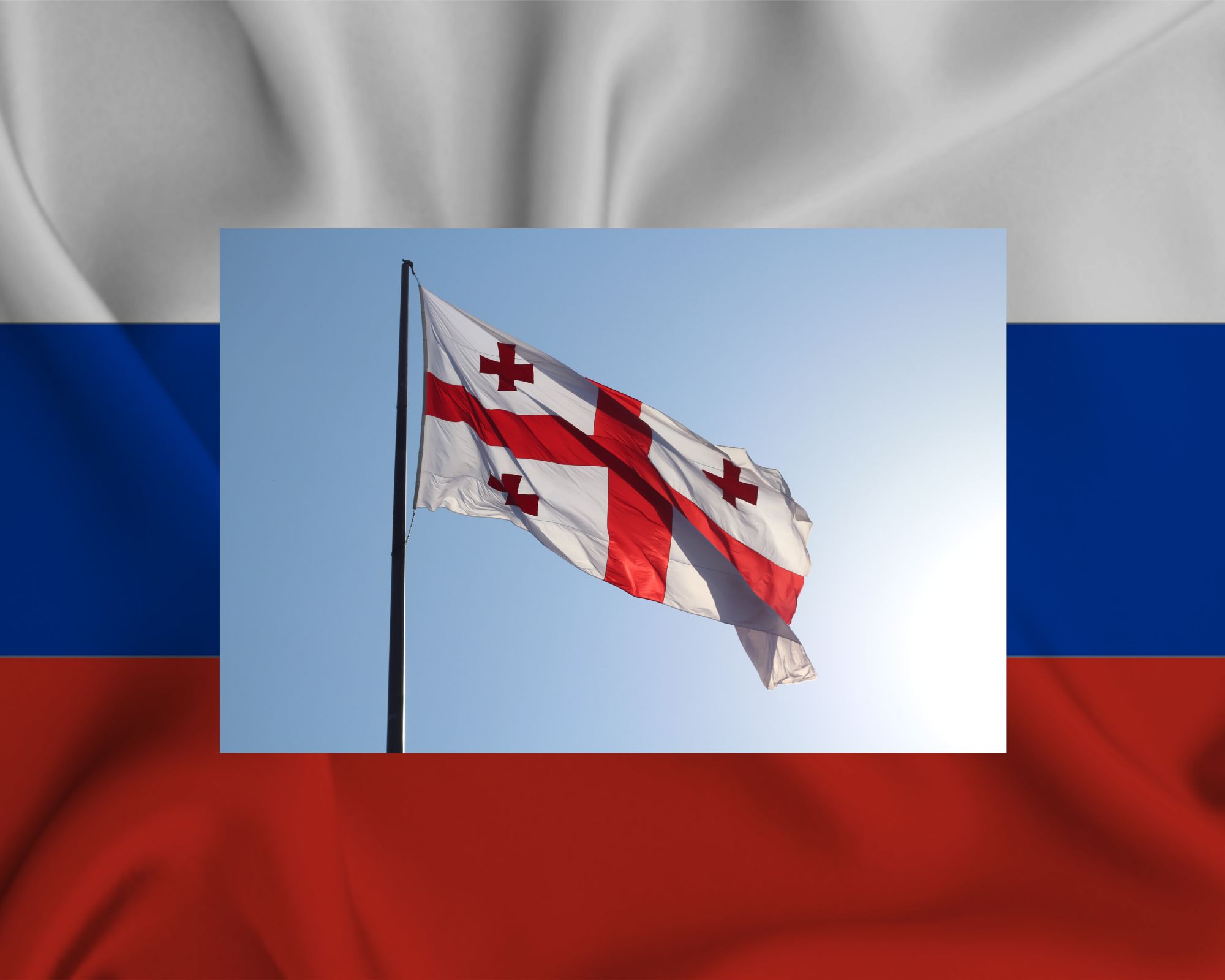 Image by Arzu Geybulla. The flag of Georgia, image by Zura Narimanishvili, free to use under Unsplash License.

More than 20,000 signatures were collected in an online petition calling to introduce visas for citizens of Russia and Belarus arriving in Georgia. The petition, introduced on August 3rd, is the latest in anti-Russia sentiments in the nation.

According to reporting by Civil.ge this is not the first time the government of Georgia received such a request. In February, when Russia invaded Ukraine, then in March, similar requests were made, but so far, the ruling Georgian Dream party has said such measures were “irrational.” The Chairman of the ruling Georgian Dream party, Irakli Kobakhidze, even compared disdain towards Russians in Georgia with anti-Semitism.

Russians can currently reside in Georgia without a visa for a period of up to a year — a right granted to some seventy countries, according to the information by the Georgian Ministry of Foreign Affairs.

The Georgian population at large has been clear on its position, since the start of the invasion, there have been numerous mass protests in support of Ukraine. At the time, many drew parallels to the 2008 5-day war between Russia and Georgia in the latter's two separatist regions of South Ossetia and Abkhazia.

When Georgia expressed interest in joining NATO in 2008, tensions escalated,  ending in a war that cost hundreds of lives, displaced tens of thousands, and left both territories in a state of frozen conflict. A six-point peace deal signed between Russia and Georgia on August 16, 2008, did not stop Russia from recognizing Abkhazia and South Ossetia as independent, earning widespread condemnation by Western leaders. That condemnation was reinforced in a statement issued by the acting head of the EU Delegation to Georgia on the eve of the anniversary: “As the EU stands united in condemning, in the strongest possible terms, Russia’s unprovoked and unjustified war of aggression against Ukraine, we also reiterate our condemnation of Russia’s recognition of and continued military presence in the Georgian territories of Abkhazia and South Ossetia. It is a violation of both international law and of Russia’s commitments under the 12 August 2008 agreement.”

On August 9, NATO's Secretary General's Special Representative for the Caucasus and Central Asia, Javier Colomina, called on Russia to withdraw its troops from Georgia.

As reiterated at #MadridSummit, #NATO strongly supports the sovereignty and territorial integrity of Georgia within its internationally recognised borders, and continues to call on Russia to meet its international obligations and commitments and withdraw its forces from Georgia 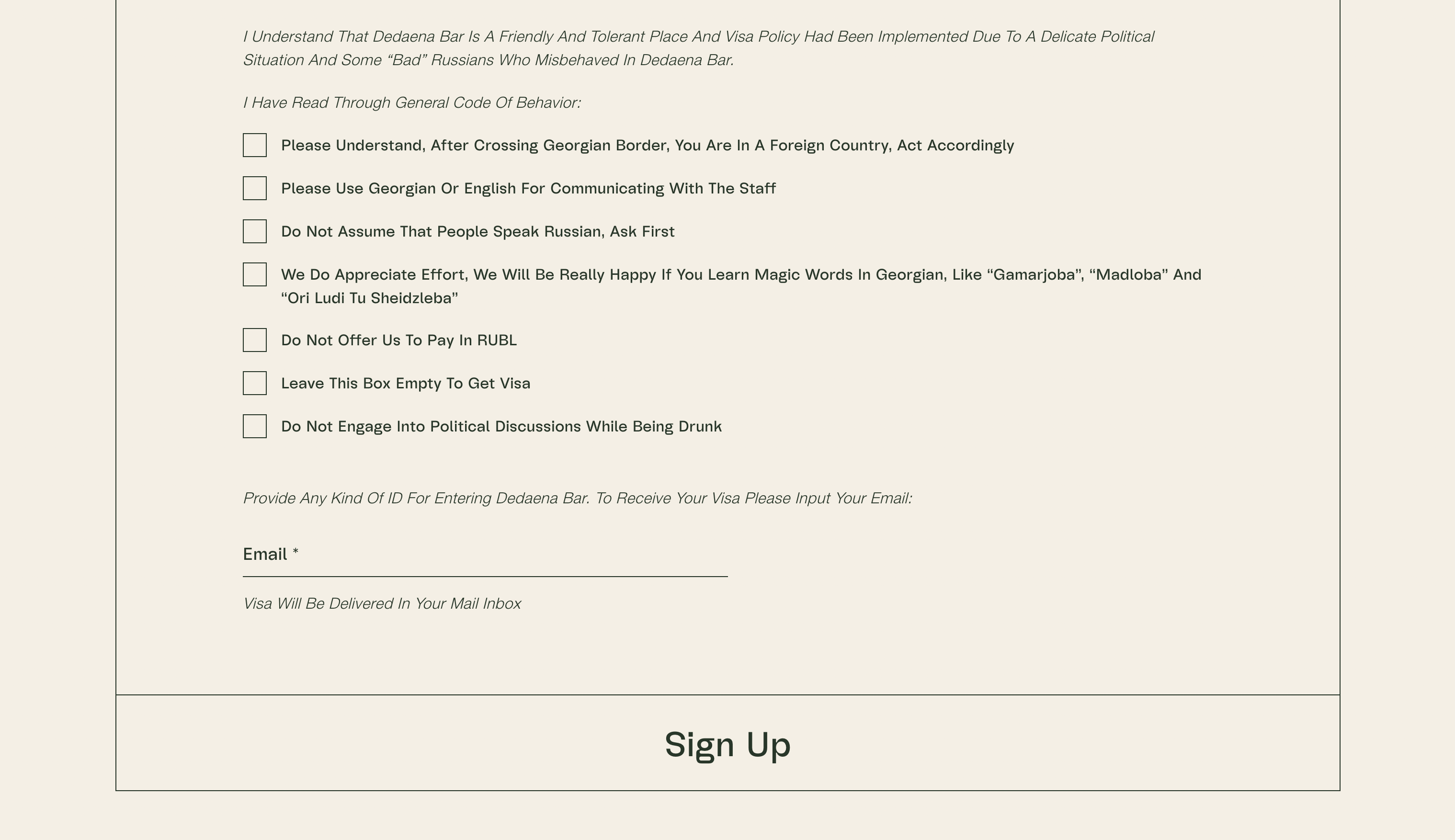 The signature campaign for introducing a new visa protocol was followed by an incident at a local Tbilisi bar Dedaena [Mother Tongue]. In a Facebook post shared on August 4th, Data Gurdjieff, the owner of the bar, said the bar was flooded with negative reviews on Google and threats on other social media platforms. “My personal posts are being reported and deleted,” added Gurdjieff. The cyberattack was caused as a result of a visa registration form available on the website of the bar. “Citizens Of Russia Need A VISA To Enter Dedaena Bar Because Not ALL Russians Are Welcome. We Stand For Equality And Unity, But We Need To Make Sure, That Brainwashed Russian Imperialists Do Not End Up In Our Bar. Please Support Us By Filling Up A VISA Application, So Nobody Has To Hang Out Alongside Ass*Oles. Thanks For Understanding,” reads the form. 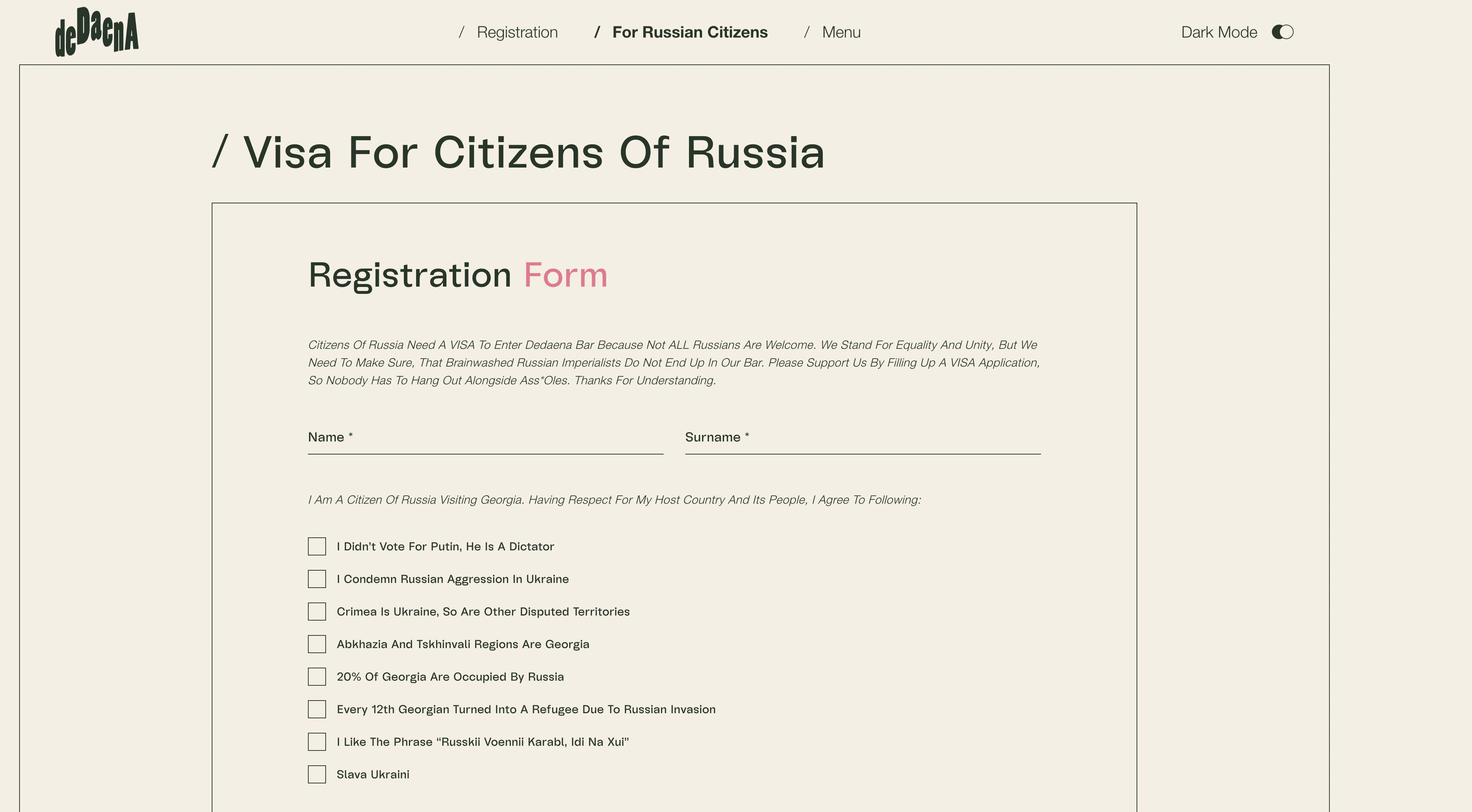 There is a registration form for other visitors as well — albeit less complex.

According to reporting by Radio Liberty, the form “irked a loose network of radical Russian chauvinists and ultranationalists who continue to harass and bully perceived cultural foes online despite their patriarchal Male State movement being banned in Russia since October 2021.”

Within hours of Male State and its sympathizers’ coordinated targeting of the establishment for its treatment of Russians around noon on August 4, Google had been inundated with thousands of negative reviews of Dedaena and the bar's management said its site had been hacked.

The online mob had also portrayed Dedaena as a haven for homosexuality and cited its existence as evidence that Georgia should be conquered and Georgians brutalized.

By August 6, according to Dedaena's update on Facebook, the attacks trickled off.

“It is a shame that our fellow citizens are conducting a xenophobic campaign,” said Mdinaradze, according to JamNews reporting.

A survey by CRRC Georgia from March suggested that 59 percent of Georgians supported restrictions on Russians entering the country. Support was especially high among young and opposition-minded people.

Meanwhile, the ruling party was criticized for its weak stance against Russia since the start of Russia's invasion of Ukraine. On February 1, the national parliament of Georgia adopted a resolution in support of Ukraine, but was criticized by the opposition for stopping short of naming the aggressor by name. Following the invasion, Irakli Kadagishvili, the Chairman of the Committee on Procedural Issues and Rules, said a new resolution was underway. It was not possible to confirm at the time of writing this story whether this was the case.

On August 3, the Transparency International Georgia chapter published a study on “Georgia's economic dependence on Russia: Impact of the Russia-Ukraine war.” According to the research, TI Georgia said between January to June 2022, Georgia received 2.5 times more in remittances, tourism, and commodity exports from Russia compared to the previous year's indicators. In addition, the country has registered seven times more companies between March and June from the previous year. “A total of 13,500 Russian companies are registered in Georgia, and half of them were registered after the start of the war,” said the report.

Higher numbers of Russian visitors were also reported. Between January to June 2022, Georgia received over 200,000 Russian citizens. And although the numbers are less compared to the previous years, it is still significant given the nation was closed for much of the year due to COVID-19 and other travel inhibitors because of the war.

Still, for the ruling government, the numbers and the findings of the TI Georgia report meant little. Shortly after the report was published, Shalva Papuashvili, who is the Speaker of the Parliament, said the report was spreading xenophobia against Russians in Georgia. The speaker said the Russians coming to Georgia were “mainly young people” with “good incomes” employed in IT, culture, and management fields back in Russia. “This is the middle class” who wants “stability, democracy, and freedom,” which is what our country is, said Papuashvili.

Georgia never joined the list of Western countries to sanction Russia. The ruling party said, doing so would have devastated the country's economy which was still recovering from the pandemic, not to mention lead to potential aggression in Georgia's territories, given the outcomes of the 2008 war.

Combined with the ongoing crisis of freedoms in the country, Georgia is increasingly resembling the Russian governance model, wrote Ian Kelly and David J. Kramer in a May 2022 article in Bullwark.com. “The Georgian Dream government seems to calculate its decisions based not on whether a policy furthers integration with Western norms, but whether it might upset the dictator in the Kremlin. In its domestic policy, the government has been steadily gathering all the reins of power, in all three branches of government, and marginalizing or dismantling institutions that could provide a check on that power. This has been particularly apparent in its refusal to make reforms urged by the U.S., Europe, and NGOs to ensure an independent judiciary,” wrote the authors.