China is continuing its military drills in the Taiwan strait 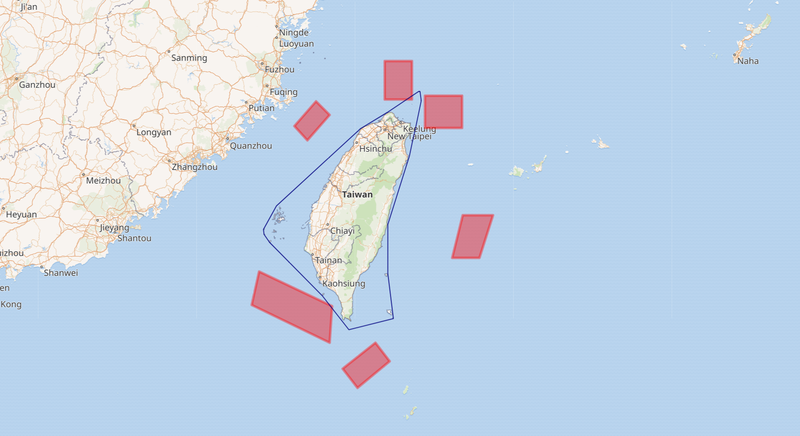 After U.S House Speaker Nancy Pelosi's Taiwan visit, China carried out an unprecedented one-week live-fire military exercise across the strait between August 4–10 2022. The following article, which addresses concerns and implications of China's attempts to normalize its military action, was written by Brain Hioe and first published in New Bloom on August 8, 2022. It is republished on Global Voices under a content partnership agreement with New Bloom.

After six full days of military exercises on the coast of Taiwan, it remains unclear whether China will cease its drilling or continue in the coming days. China's People’s Liberation Army (PLA) initially announced that its four days of live-fire drills would end on August 7, but then it announced that military exercises in the area would continue. The drills are an escalation for the Chinese military, seeing as they take place closer to Taiwan than in previous conflicts, like the Third Taiwan Straits Crisis from 1995–1996. The drills on August 8 emphasised on anti-submarine warfare and sea raids.

The announcement did not specify when or where any upcoming drills would take place but said that they should end by August 10. National militaries typically announce 24 hours in advance when planning live-fire exercises. That being said, China changed its original specifications for drilling, adding a new location to its original plan. In response, Taiwan’s Maritime and Port Bureau recommended that Taiwanese fishing and commercial vessels avoid these areas on Thursday morning.

Stories from PRC media claim that PLAN destroyer Nanjing was found 11.78 km away from Hoping Power Plant in Hualien. #ROCNavy denounces such disinformation. No PLAN vessel has entered our territorial waters since August 4 when the PLA drill started.

Some experts have warned that the PLA may intend to normalize military drilling east of the median line of the Taiwan Straits. Chinese state-run media outlets have also suggested this may be the case.

China has framed its drilling around Taiwan as a blockade, which the Taiwanese government has echoed. Though it is unclear whether the drills are, in fact, over, maritime traffic through affected areas has resumed. During the drilling, the Taiwanese government warned fishing vessels not to pass through the area, to maintain communication with the proper authorities, and to notify authorities if they encountered any Chinese vessels.

Nevertheless, the Chinese government has stepped up its efforts to militarily intimidate other powers in the region, not just Taiwan. During the course of the four-day drilling, China lobbed missiles over Taiwan, the first time that China has done so, with missiles fired from Pingtan passing over Taipei and into the drilling area to simulate an assault on Taipei.

Yet some missiles also landed in Japan’s exclusive economic zone, which Japan’s Ministry of Defense believes was deliberate. Chinese vessels were also reported to have approached the disputed Senkaku/Diaoyutai Islands before being warned off, something which also took place before the Pelosi visit.

China’s efforts at intimidation have not only targeted Japan, however, with plans to conduct drilling in the Bohai Sea and the Yellow Sea, near South Korea. It is unclear why China has decided to preemptively lash out with a show of force against regional powers with close military ties to the US when this might encourage more cooperation between other powers in the region and foster closer ties with the West. Indeed, a meeting between US Secretary of State Antony Blinken and the president of the Philippines, “Bongbong” Marcos, served to reaffirm US-Philippines military ties amid this crisis.

Taiwan intends to carry out military drills this week in Pingtung, in light of recent events. However, this will take place inland, so as to avoid inflaming regional tensions. If China intends to carry out a blockade of Taiwan, it is unlikely that the Taiwanese military would not react to it in some way. Today, the Ministry of National Defense reported on Chinese information warfare, stating that it had found 272 disinformation messages this month.

A pleasure to meet Philippine President @bongbongmarcos to discuss ways to strengthen our longstanding alliance with the Philippines. I look forward to deepening our collaboration to advance freedom, prosperity, and security across the Indo-Pacific. #USPHThrivingAt75 pic.twitter.com/rSjxD6mxJC

Indeed, the possibility for escalation remains high. The US has announced that it will soon sail vessels through the Taiwan Strait, which the Chinese government has begun making claims over, and retains forces on standby in the region. The US and India will also conduct joint military exercises near the disputed border with China in the coming days.

At the same time, despite clearly heightened tensions, it bears reminding we are still far from anything resembling a full-scale invasion of Taiwan, which would be telegraphed in advance through soldiers massing on the coasts of China and is complicated by China’s lack of sufficient ships to bring troops over to conduct a long-term occupation of Taiwan. Nor is it as though the US and China are on the verge of nuclear war over Taiwan; if Ukraine is to serve as any example, the US would be highly cautious of direct involvement in a conflict, in spite of the high-level ties that the US and Taiwan currently enjoy. Though the risk of escalation is certainly there, it is also important to avoid unrealistic, hyperbolic views of the present outlook as well.