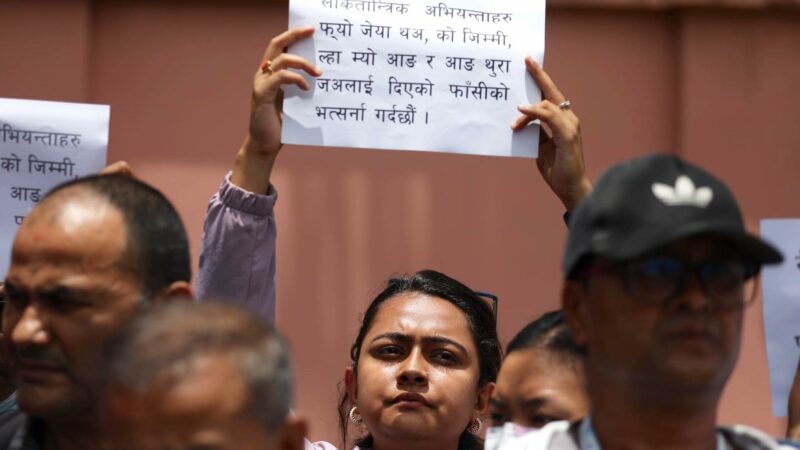 The placard reads: ‘[We] condemn the hanging (capital punishment) of democratic campaigners in Myanmar’. Image by Suman Nepali via Nepali Times. Used with permission.

This article was first published in Nepali Times. A slightly edited version is republished on Global Voices as part of a content-sharing agreement.

The four democracy activists including former lawmaker Thaw, were accused of committing ‘terror acts’ and were sentenced to death in a closed-door trial. It was a move much criticised by human rights activists, as well as many international organisations, including the United Nations Security Council.

In Nepal, National Alliance for Human Rights and Social Justice (Human Rights Alliance) has strongly condemned the military government’s brutal torture of freedom fighters for their efforts to restore liberties and democracy.

“This heinous activity of the military government has severely violated the fundamental values and principles of democracy in the country,” reads the statement by the Human Rights Alliance, which also said that it interprets the act of execution as a blatant violation of the people’s right to life, liberty and security.

Human Rights Alliance further condemned the cruel and barbarian execution against pro-democracy activists as reprehensible, calling it a heinous and intolerable devastating incident.

Human rights activists have maintained that Myanmar is a member state of the United Nations and must respect and honour the fundamental democratic values and norms, international humanitarian law, and human rights principles.

“We strongly demand that any type of torture, kidnapping, restriction on assembly and rally, intimidation, and cruel punishment must be immediately stopped ensuring the restoration of democratic rights, and handing it over to the people of Myanmar,” states the Human Rights Alliance in the letter signed by its chair, Min Bahadur Shahi, who was formerly a member of the National Planning Commission. 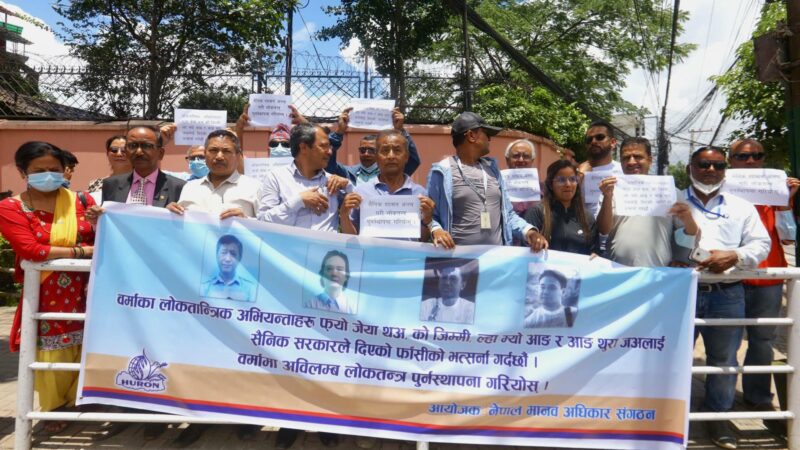 Image by Suman Nepali via Nepali Times. Used with permission.

The Alliance has further urged the international community, including civil society and regional organisations like the Association of Southeast Asian Nations (ASEAN), Bay of Bengal Initiative for Multi-Sectoral Technical and Economic Cooperation (BIMSTEC) and South Asian Association for Regional Cooperation (SAARC), to take immediate action to protect and promote the democratic movement, pro-democratic activists, and sovereign people without any further loss and damage, as well as to advocate and create mounting pressure with a view to restoring democracy.

Myanmar has been seeing violent crackdown on pro-democracy supporters following the military coup d’état on February 1, 2021, staged by Min Aung Hlaing, the commander-in-chief of the country’s armed forces. Since then, over 2,000 people have been killed and nearly 15,000 arrested, including Aung San Suu Kyi and other senior government figures.

Demonstrators have mostly employed peaceful and non-violent forms of protest, to which the military leaders have adopted various countermeasures, including media and internet blackouts and the spread of misinformation.

The Human Rights Alliance statement concludes: “We demand that the Junta military must be isolated and cut down from the global cooperation and partnership to restore and support the democratic movement, and campaigns in Myanmar.”

Last week, the Human Rights Organisation of Nepal (HURON) also held a rally in Kathmandu condemning the execution of the four men. Nepal’s rights groups have also been protesting impunity in Nepal itself, and a draft bill in Parliament that would allow immunity from prosecution of those accused of heinous crimes during the 1996-2006 Maoist conflict in Nepal.