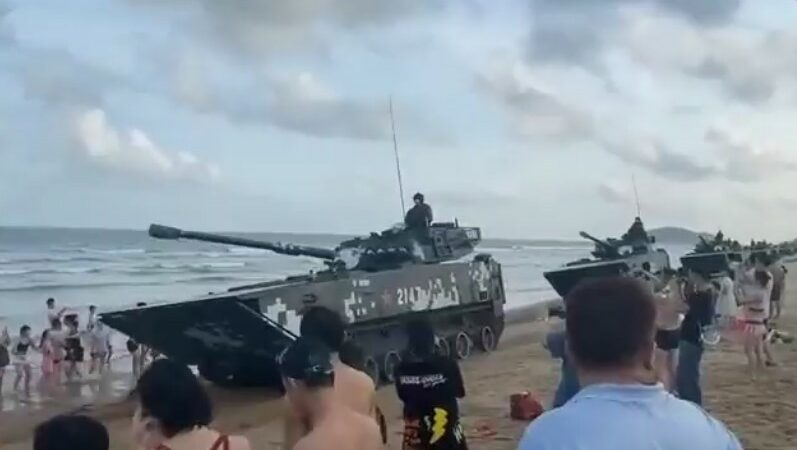 Military vehicles in Xiamen, a coastal city in Fujian province. Screenshot from a Twitter video from Bang Xiao

US House Speaker Nancy Pelosi arrived in Taipei on Tuesday, August 2, 2022, to reaffirm Washington’s commitment to protecting Taiwan’s status quo. The visit has thrown the region into chaos as China has promised potential military action in response to the visit.

While the majority of Taiwanese citizens anticipated Beijing's retaliation, most of them are continuing to go about business as usual even amid the escalating tensions.

As Chinese media outlets stressed Nancy Pelosi’s visit as “non-official” and “personal,” Pelosi saw her trip as a way to support the US partnership with Taiwan:

Our visit reiterates that America stands with Taiwan: a robust, vibrant democracy and our important partner in the Indo-Pacific. pic.twitter.com/2sSRJXN6ST

In her Congressional Delegation statement, Pelosi addresses the significance of the trip in defending Taiwan’s status quo:

Our discussions with Taiwan leadership will focus on reaffirming our support for our partner and on promoting our shared interests, including advancing a free and open Indo-Pacific region. America’s solidarity with the 23 million people of Taiwan is more important today than ever, as the world faces a choice between autocracy and democracy.

Our visit is one of several Congressional delegations to Taiwan – and it in no way contradicts longstanding United States policy, guided by the Taiwan Relations Act of 1979, U.S.-China Joint Communiques and the Six Assurances. The United States continues to oppose unilateral efforts to change the status quo.

In April 1997, the then US House speaker Newt Gingrich visited Taiwan following the Third Cross-Strait Crisis (1995–1996) and ahead of the handover of Hong Kong to China on July 1, 1997.

During the mid-1990 crisis, Beijing conducted a series of military exercises in Fujian after the US government issued a visa for the then Taiwanese President Lee Teng-hui to deliver a speech on “Taiwan's Democratization Experience” at his alma mater, Cornell University. Beijing saw Lee’s performance as a violation of the one-China policy.

China insists Taiwan and mainland China are a unified country and the People's Republic of China (PRC) is the sole legitimate representative of China even though Taiwan has been a self-ruled state since 1949 after the ruling party of the Republic of China (ROC) fled to Taiwan upon its defeat in the Chinese Civil War (1927–1949).

After his three-hour visit to Taiwan, Newt Gingrich stressed that the US would take any action necessary to stop Beijing from annexing Taiwan by force. Beijing protested strongly against the high-level visit, but the crisis was settled through diplomatic means.

Pelosi’s visit may be even more significant. In addition to a meeting with Taiwanese President Tsai Ing-Wen, she also met with pro-democracy activists from mainland China, Hong Kong, and Taiwan, as News Bloom Magazine’s blogger Brian Hioe highlighted:

While Nancy Pelosi is not the first US House speaker to land in Taiwan, Beijing’s response has been unprecedented. Before the visit, the Chinese officials threatened the US with “forceful measures” with “grave consequences,” and state-affiliated opinion leaders like Hu Xijin, the former editor of the state-run publication Global Times, advocated military action in response.

Though the White House warned Beijing against turning the visit into a crisis, nationalist sentiment has been boiling on Chinese social media, and online patriots are calling for hardcore military operations.

Soon after Pelosi’s Taiwan trip was confirmed, crowds rushed to the coastal area of Fujian to watch military vehicles moving into Xiamen, a coastal city in Fujian across the Taiwan Strait:

Latest footage circulating on Chinese social media WeChat shows armoured vehicles on the move in the southern Chinese city of Xiamen, as US Speaker Pelosi is reportedly heading to Taipei. pic.twitter.com/ePpJsO2VyM

At night, Xiamen's sky was brightened by military live-fire exercises and flash bombs dropped from the fighter jets, fostering fears that a war might soon arrive on Taiwan's shores:

My friend is in Xiamen on business right now and just sent me this. She says “這裡大家覺得會打仗 （Everyone here feels like there will be a war).” pic.twitter.com/mxCOB132RP

Duan Dang, a blogger behind the South China Sea Brief compared the air force drills between the Third Strait Crisis (July 1995 to March 1996) and the current crisis with a map:

Taiwan Ministry of National Defense sees the drills as deviating from the principle of peaceful resolution of cross-strait relations:

PRC announcing air-naval live-fire drills around Taiwan is self-evidently apparent that they seek a cross-strait resolution by force instead of peaceful means. Activities around our territory are closely monitored by #ROCMND and, will meet our appropriate responses when needed.

In addition to military threats, China halted imports of more than 100 goods from Taiwan.

While the tension is mounting, most Taiwanese are far from panicking. Taiwan lawmaker Lin Ching-Yi posted images of a welcoming message shown on the Taipei 101 building:

Taiwanese are in a panic? No, we are very excited! We welcome all friends of the same value! Welcome speaker Pelosi. pic.twitter.com/s54FgGqzwP

For ordinary Taiwanese, while they are worried about Beijing’s retaliation, many supported the visit as it reaffirmed Washington's commitment to Taipei, which would help Taiwan to maintain its status quo as a free and democratic society, as highlighted by Taiwanese Twitterers @christinelu and @formosanafro:

There is no “Taiwan question” other than asking if 24M Taiwanese people want to remain a democracy and when a majority of them vote YES then their voices matter more than the propaganda of an insecure government that feels threatened by peaceful people living in a free society. https://t.co/nasprdi4aW

To the People's Republic of China, no matter how many times you conduct military drills around Taiwan, suppress Taiwanese voices in int'l organizations and repeat the same propaganda about Taiwan, the Taiwanese never wavered.

As China’s military threats have been ongoing for decades, most Taiwanese people have developed a strategy to maintain a normal life in the face of crisis, as suggested by the viral meme circulated on social media: 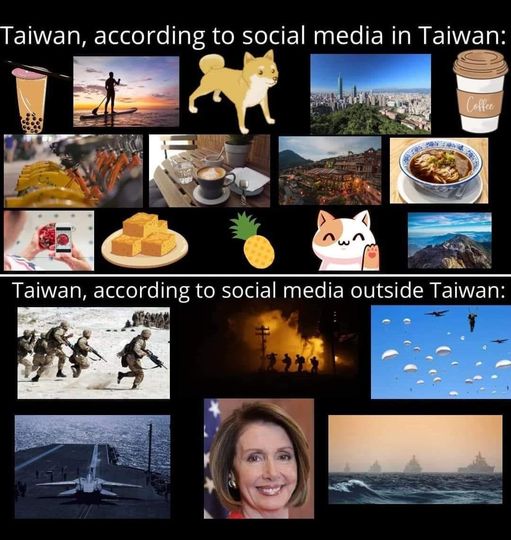 The more daring critics such as @Lelechen945, even mocked China’s threat as “missiles fired from the mouth”:

The fifth response to Pelosi's visit!

Zhao Lijian: Chinese people can do whatever they have said