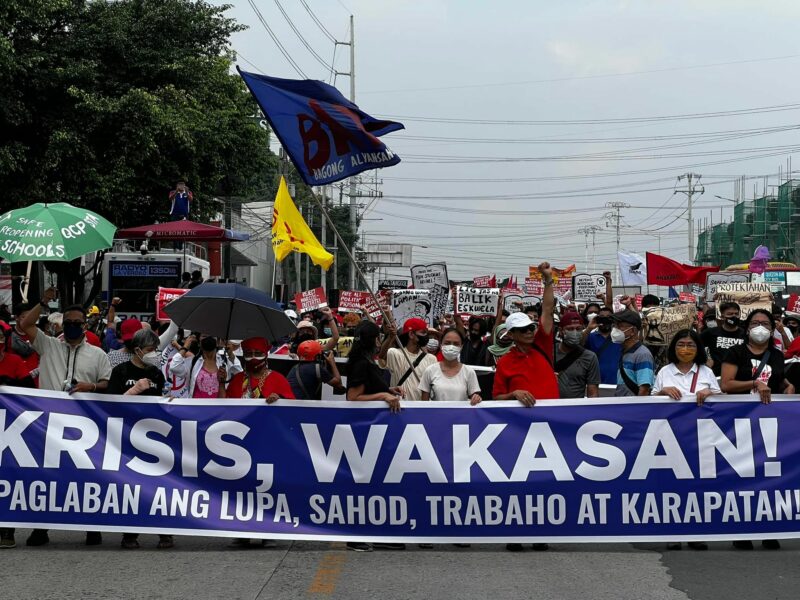 Protests were held during the State of the Nation Address in Quezon City, Philippines. The banner, written in Filipino, means “End the Crisis! Fight for land, wage, jobs, and rights.” Photo from the Facebook page of BAYAN

Philippine President Ferdinand “Bongbong” Marcos Jr. outlined his economic platform during his first State of the Nation Address (SONA) on July 25. His supporters lauded his vision for the country, but critics noted that the new government is merely continuing the economic policies of former President Rodrigo Duterte.

Under Duerte's leadership, the economy plunged into crisis during the COVID-19 pandemic due to prolonged militarized lockdowns. He also pursued mega-infrastructure projects like dams and expressways, which increased the country’s debt.

Marcos campaigned on a platform of unity without clearly articulating his plans for the economy. Thus, there were concerns about his priorities after dominating the elections on May 9.

He is the son of the country’s former dictator Ferdinand Marcos Sr. who was accused of plundering the local economy. Many believe Marcos Jr.'s campaign was funded by money that his family embezzled from the national treasury.

His first set of appointments included members of his economic team, which may be intended to assure local and foreign investors that the incoming government will support the business sector.

While the initial appointments made by Marcos were welcomed by big businesses, several stakeholders noted that members of the new economic team were instrumental in implementing policies that negatively affected small farmers and workers under previous administrations.

During his inauguration on June 30, Marcos did not elaborate on his economic plans as he reiterated his call for unity while praising the achievements of his father. His speech was fact-checked by media groups who found it contained false assertions that the economy attained food sufficiency during the dictatorship. In reality, there was massive hunger across the country as poverty worsened caused by Marcos Sr.'s mismanagement and corruption.

Asked during a press briefing about his solution to surging food and fuel prices, Marcos rejected a government agency report about the high inflation rate. This response was widely mocked on social media.

WATCHL: In his first press conference, President Ferdinand “Bongbong” Marcos Jr. disagrees with the 6.1% inflation rate of the country in June 2022. He claims that the figure, which was reported by the Philippine Statistics Authority, “is too high.”

In another press briefing, Marcos made confusing remarks about the government’s free transportation service (libreng sakay) for the public. He was supposed to give updates about this program but he only uttered incoherent statements. Again, netizens wryly commented on this issue.

If Marcos seemed inarticulate about key economic issues based on how he addressed the public through live press briefings, he sounded more confident during the SONA. He set clear targets for his administration aimed at reducing poverty and promoting inclusive growth. The country's Finance Secretary summed up the economic thrust of the Marcos government:

In today’s Post-SONA Philippine Economic Briefing, we provided the public with a more comprehensive look at our 8-point socioeconomic strategy to steer the economy back to its high-growth trajectory. pic.twitter.com/NXZDwSSSkg

When he talked about new taxes, netizens reminded him about the unpaid family estate tax of the president’s family. Activist Renato Reyes criticized the tax policies of Marcos:

In the one month he has been president, Marcos Jr has proposed a VAT on digital services, vetoed a tax exemption for election workers such as teachers, and refused to suspend oil taxes, while still not paying the P203 billion estate tax of his family.

Marcos himself is a convicted tax evader which caused many to question his eligibility as a candidate.