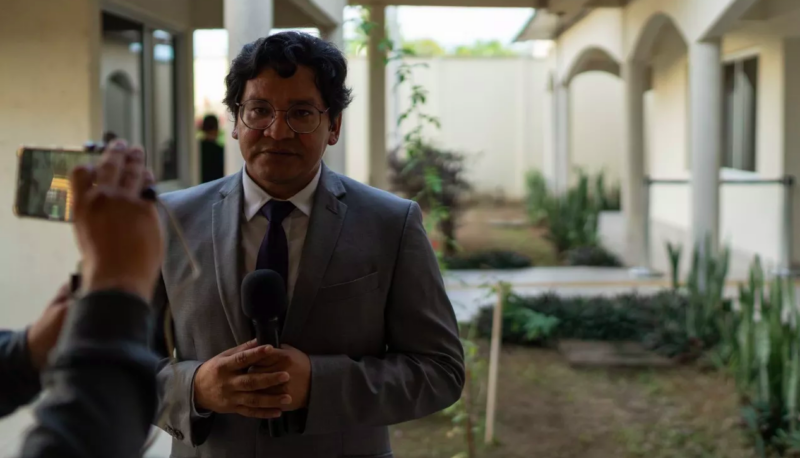 This article, written by Ciro Barros and Avener Prado, was originally pubished by Agência Pública on June 22, 2022, and is republished here in a partnership agreement as an edited version translated by Liam Anderson.

The legal representative of the Union of Indigenous Peoples of Javari Valley (Univaja), Eliesio Marubo, gave an interview to Agência Pública in Tabatinga, in Brazil’s northwestern state of Amazonas, shortly before leaving for Brasilia, on June 21.

After having joined the intensive efforts to search for the Indigenous expert Bruno Pereira and the British journalist Dom Phillips, who were found dead in the region on June 15, Marubo was on his way to the Brazilian capital alongside a group of Indigenous representatives with a schedule full of meetings with state bodies.

Following the international commotion and media coverage caused by the murders, the Indigenous movement wanted to bring attention to a longstanding demand: the strengthening of state institutions in the Javari Valley, which has the largest population of isolated and recently-contacted Indigenous peoples on the planet.

In the interview below, Marubo recalled the searches, discussed criminal organizations’ activities in the region, and called on the state to maintain a presence there, including in the riverside communities. Three men were charged with the double homicide.

Agência Pública: How did you hear of Bruno and Dom's disappearance?

Eliesio Marubo: [On June 5], around 9 a.m. or 10 a.m., Orlando [Possuelo, an Indigenous expert and member of Univaja] said that Bruno and Dom had disappeared. At first, I said, ‘Let's see, because we can't trigger the security protocol if it's not true. You have a two-hour waiting period, which is the time you have to check this.’ The two hours passed. They didn't show up, we couldn't make contact with them. Then the first [search] boat left with Orlando and they couldn't find them [either]. We got worried and activated the security protocol. I quickly called the Military Police Battalion and the commander immediately sent three policemen. I chartered a speedboat from here in Tabatinga that took the police to Atalaia [do Norte, the main urban centre near Javari Valley, where Bruno and Dom were returning to when they disappeared]. We took the same route that they were going to take back. We didn't find anything either. We came back around 10 p.m. and began to imagine the worst.

Monday morning [June 6], I spoke with the Navy, the Federal Police, and the Army. On Tuesday [June 7], we went to Atalaia and set up the situation room to manage everything from there. Initially, the authorities did not pay much attention to the situation and we began to pressure their superiors to do something. So we took legal action to force the Brazilian state to show its presence and begin a search. On Wednesday [June 8], we started to bring public attention to the [favourable court] decision. That was when the Army, and the Armed Forces began to appear, each one acting separately; it was not a well-organized search.

Meanwhile, from Monday [June 6] our team was making a full-time camp at the search site where local people said Bruno and Dom had last been sighted. On Wednesday, the Military Police deployed a team of five police officers who have stayed with our team since. On Thursday, the helicopters arrived. And the search continued until we found Bruno and Dom's bodies.

AP: How was it dealing with the ineffectiveness of these state bodies?

EM: It was really strange. The Army, for example, said they were going to search in Atalaia do Norte city and on the Atalaia do Norte roadway, a totally inappropriate location. The Navy stayed on the river going up and down. They didn't enter the ‘furos’ [smaller waterways], the flooded parts [of the forest]. The Federal Police interviewed people in an arbitrary and unplanned way. The authorities didn't work with us to search the region. That only happened in the last few days. It was when [the Indigenous people] found [Dom and Bruno’s] backpacks that they started going to the search areas [where we were].

AP: You said that Univaja has reported invasions of Indigenous lands and the activities of organized crime in Javari Valley many times to various institutions. What were the authorities’ responses?

We sent documents to the Federal Prosecution Office and the Federal Police, but we got no response as to which inquiries were opened, [or] based on which accusations. We informed them about what we were doing, because we sensed a certain tendency on the part of Funai (National Indigenous Foundation, a government body) to try to criminalize Univaja's work. We have previously experienced this within the Indigenous movement. That’s why we opened a dialogue with the Federal Police and the Federal Prosecution Office so that they could follow the results of our work, which consisted of passing [them] the information we gathered so that they could do the police work.

EM: When the EVU [Univaja’s Surveillance Team] was set up, on Nov. 20, 2021. We began to send detailed information, with descriptions, identification of people, maps, and places where there was a greater concentration [of intruders]. On the map, we identified 60 places vulnerable to trespassers entering [the Javari Valley Indigenous Territory]. We reported who the people were. The accused [of Bruno and Dom's murder] were among these people. Before EVU, we were already sending information, but the authorities’ response was that the accusations were not sufficiently backed up. That's why we created EVU, to analyze and give more precision and clarity to the information.

AP: Could you explain how the illegal fishing trade works to an audience unfamiliar with the region? How lucrative is this business?

EM: It is a highly lucrative business. These people [illegal fishermen, like the suspects of the murders], who are seemingly simple, are actually part of a criminal organization that uses them to do illegal fishing and hunting within Indigenous land.

Financing these actions is extremely expensive. The logistics for a trip from Tabatinga or Atalaia to the Indigenous lands can cost upwards of 250,000 reais (around 46,000 US dollars) and the profit from this illegal activity can be more than 500,000 reais (92,000 US dollars). For this operation to get into the Indigenous lands, many boats, a lot of gasoline, and tons of ice are needed. It's a very large operation and they [illegal fishermen] are the final part of the network that carries out this type of activity, including for export. The surplus that is not used domestically goes to Peru, to Colombia. It makes a lot of money. It's possible for an expedition like this to make more than a million reais.

AP: Did you think that the Federal Police's statement that nobody specifically ordered Bruno and Dom's murders was premature?

EM: The police themselves acknowledged that this was a premature statement. Anybody who followed the situation and the developments around Dom and Bruno's disappearance can see that [the case] could not have been resolved with the arrest of only two people. Because, as I said, there are many other people involved; this network hasn't been dismantled. If the Federal Police and the Civil Police close this investigation with only the arrest of the two [suspects who admitted killing the Indigenous expert and the journalist], they are allowing an entire criminal organization to operate in the region and certainly for other Doms and other Brunos [to meet such a fate] in the future.

AP: You and your colleagues are now making a series of demands not only to avoid further tragedies like this, but to safeguard the Indigenous peoples’ lands in Javari Valley. Could you give us an overview of the demands?

EM: The Indigenous movement in Javari Valley has sought to establish a dialogue with public institutions and the Brazilian state. We are opening a dialogue with the authorities to get these institutions to take part in the life of the region, because, as I have already mentioned in countless interviews, the state is absent in the region. It is absent precisely because of the inefficiency of its institutions.

We want to talk with the legislative authorities to, for example, review the budget or reallocate expenditure by sending money to Funai [the governmental agency for Indigenous affairs], because this is a major obstacle: Funai's lack of action, due to a lack of staff and budget. [We want to talk] with the judicial authorities, to ensure that the investigations are not stalled by some police chief here in the region. [We want to talk] with the executive authorities, so that they can rethink their approach and ensure that public bodies act in keeping with their main purpose, their mission, their function within the Brazilian state.

We need Funai to act, the Army to guarantee security and national sovereignty, [and] the Federal Police to conduct investigations in accordance with the Code of Criminal Procedure. We need the state to maintain a presence in the region.

AP: Are you considering measures that will also bring those people in the riverside communities neighbouring the Javari Valley Indigenous Territory within the ambit of the law?

EM: The history of the Indigenous movement in Javari Valley is one of dialogue not only with state institutions, but also with our neighbours, the riverside communities. In the past, we helped to create an organization representing the riverside communities and to establish a dialogue with the local government, so as to develop policies in this population’s interests. As long as they have a [sustainable] plan for managing fish and what they need to survive and generate income, they won’t invade Indigenous land, [or] engage in unlawful activities. When I say that we want to establish a dialogue, it is precisely this: so that we can account for not only Indigenous people’s demands, but also [those of] the riverside communities that don't belong to criminal organizations, that want to make a living sustainably.

EM: We should highlight once again that the Indigenous movement in Javari Valley has always been open to dialogue. We don’t tie ourselves to governments’ ideological issues. Before and during the PT [Workers’ Party, which governed Brazil from 2003 to mid-2016] government, this hollowing out [of Funai] was already happening and we criticized the government a lot. But under the Bolsonaro government, it has been much worse, not only because it repeated what the PT had already been doing, which was failing to act, but also because he encouraged groups that illegally exploit lands, such as illegal miners. The government, when its position is defined by a president in favour of an illegal activity, is signaling to the organized groups working in illicit activities that they can act freely. This is happening not only in Javari Valley, but all over Brazil.