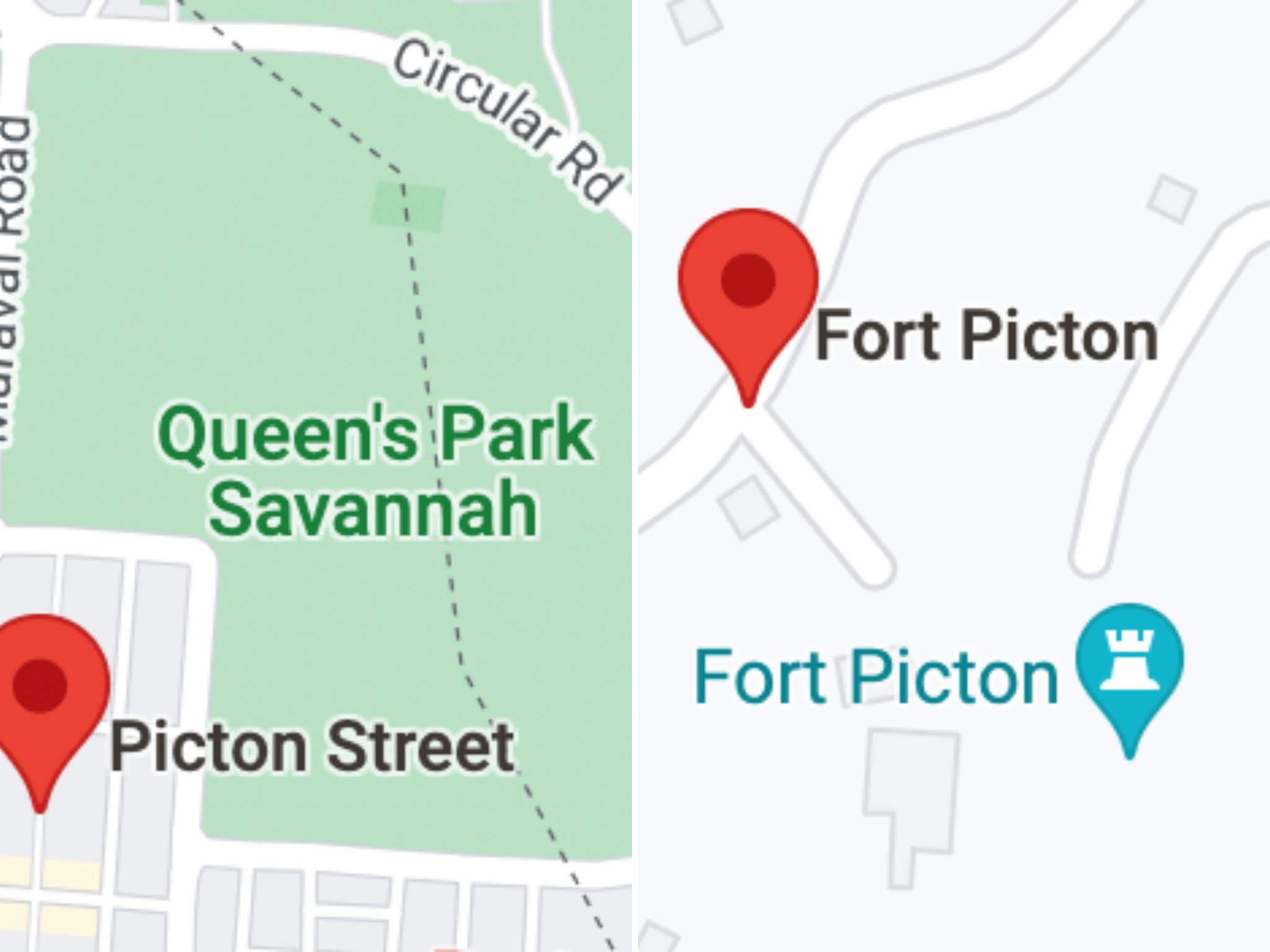 Two locations in Trinidad named after Thomas Picton, who was the island's governor from 1797 to 1803, during which time he left a bloody legacy. Screenshots taken from Google Maps.

The May 25, 2020 killing of George Floyd, an African-American man who died a slow, torturous and very public death at the hands of a white police officer in Minneapolis, Minnesota, ramped up both the level of outrage at the treatment of Black people in the United States and global participation in the Black Lives Matter (BLM) movement.

One ripple effect of the world's refocused attention on issues of racial inequity is a concerted attempt to dismantle the systems that allowed it to happen — parts of which have remained intact, giving tacit approval of continued injustices via symbols that are glorified under the banner of history. On the heels of Floyd's death there were fresh calls to remove statuary that celebrated cruel slave masters and other racists. The Barbados government, for example, removed a statue of Horatio Nelson from its high-profile position in Bridgetown's National Heroes Square. For years, he had been acknowledged as an astute British naval officer, without addressing his role in the transatlantic slave trade.

Now, a new exhibition at the National Museum Cardiff, which runs until September 3, 2023, hopes to reframe the legacy of another of the Caribbean's controversial historical figures, Lieutenant-General Sir Thomas Picton, who ruled Trinidad with an iron fist when he was governor from 1797 to 1803. A portrait of Picton had occupied an eminent space in the museum for more than a century, paying homage to his military exploits. Because of his brutal treatment of people of colour — both Indigenous and enslaved Africans — it was removed last year. Now, it is on display once more, though the circumstances and context are very different.

First of all, the portrait is no longer in a main gallery space, but a more unassuming side room; not hung on a wall, but rather, firmly contained in a plywood casing that subtly suggests it's on its way out — art that is no longer suited to a modern time and space. Furthermore, Picton is now properly contextualised, encircled by information and imagery denoting his brutal treatment of his subjects, including the infamous torture of Luisa Calderón, a 14-year-old mixed-race girl who had been accused of stealing.

The exhibit also features newly commissioned works by Trinidadian-Nigerian artist Gesiye Souza-Okpofabri and the UK-based collective Laku Neg, whose artists have strong ties to Trinidad and Tobago. Their experiential installation, “Spirited,” allows visitors to get a sense of what Calderón, as well as Thisbe and Present, two more of Picton's female victims, would have experienced. Souza-Okpofabri's multidisciplinary approach, meanwhile, incorporates tattoo design, as well as performance and film.

Back in Trinidad, people are taking note, adding their voices to the conversation about how best to tackle complicated legacies like Picton's. The juxtaposition of having the National Museum Cardiff attempt to reframe Picton's legacy while Trinidad and Tobago “still honours the tyrant” was quite apparent.

In November 2021, shortly after the museum removed the portrait from display, the Trinidad and Tobago Express penned an editorial:

T&T’s blasé attitude to its retention of symbols honouring a man who governed this country with unbridled ruthlessness and made his wealth from the slave trade when even his own country is recoiling from its glorification of him is just bizarre.

At the country's August 1 Emancipation Day celebrations this year, Freedom Project Caribbean founder Shabaka Kambon called on the government to reconsider any monuments and place names honouring Picton and other colonisers who slaughtered countless enslaved Africans and Indigenous people.

Trinidad and Tobago's National Security Minister Fitzgerald Hinds recently announced that Prime Minister Keith Rowley established a committee a few months ago, charged with examining the issue of properly contextualising the nation's history and determining the most fitting ways in which to do so.

On Facebook, history buff and media practitioner Dominic Kalipersad noted that Picton had authorised as many as 35 executions during his tenure. Despite this, there are a number of places in Trinidad and Tobago named after him.

History is written – and sometimes rewritten – by the victors, which is arguably why we find the likes of Sir Thomas Picton, Trinidad’s British Governor from 1797–1803, being lionised.

As Lieutenant General he was the highest ranking British officer to fall at the Battle of Waterloo in Belgium, 200 years ago.

However, the British military hero was the tyrant of Trinidad.

He was known to have used the slave trade to build up his considerable fortune and his treatment of enslaved Africans marked him out as a particularly cruel leader.

Picton used strong-handed methods against anyone he suspected of trying to undermine his government, and went so far as to erect gallows on the premises of Government House to show he meant business.

Slavery was a complete and total annihilation of self and sociocultural systems.

Picton as Governor even ordered the destruction of silk cotton trees because the trees were visited by Africans as places of power. […] We can never replace the things that we lost but in seeking we will always find our way.

Some commentary on the National Museum Cardiff exhibition lamented the tearing down of history, with Facebook user LF Buckland suggesting:

Very soon, we shall have no history left. How will any future generation understand previous ages, when everything has been removed? The irony is that this evaluation is ‘youth-led’, and specifically those with a Trinidad background.

In Trinidad, some social media users felt likewise, while others believed the country had far more pressing issues to attend to, but perhaps the Express editorial summed up the nuances best when it said, “It is the highest of ironies that Trinidad, of all places, should be so silent on Picton. However, the nervousness with which the authorities and sections of the national community approach contentious issues of history reveals just how far we still have to go in finding the courage to confront our tortured past.”