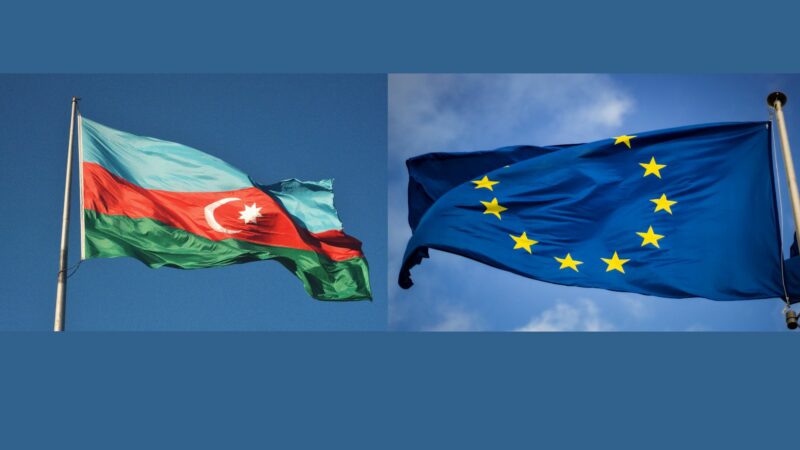 Flag of Azerbaijan, image by Hikmat Gafarzada [1]; Flag of EU, image by Christian Lue [2]. Free to use under Unsplash License [3].

President Ilham Aliyev of Azerbaijan and European Commission President Ursula von der Leyen signed [4] a Memorandum of Understanding (MoU) in the capital Baku outlining the plans for a strategic energy deal on July 18. Azerbaijan was hailed as a “crucial energy partner” for the EU and will likely remain so for the foreseeable future as it intends to expand its current capacity of 8 billion cubic meters of gas delivered per year to 20 billion cubic meters by 2027.

The increased gas flow through the Southern Gas Corridor pipeline requires Azerbaijan to increase its domestic gas production, according [5] to analysis by Euronews.

The deal comes amid insecurity of EU energy supplies [6] as a result of Russia's invasion of Ukraine and the Kremlin's threats to cut supplies altogether [7]. The new deal signed with Azerbaijan aims [5] to reduce Europe's energy dependence on Russia. “Today, with this new Memorandum of Understanding, we are opening a new chapter in our energy cooperation with Azerbaijan, a key partner in our efforts to move away from Russian fossil fuels,” von der Leyen said [5] at a press conference in Baku after signing the agreement.

The EU is turning to trustworthy energy suppliers.

Azerbaijan is one of them.

With today's agreement, we commit to expanding the Southern Gas Corridor, to double gas supplies from Azerbaijan to the EU.

This is good news for our supplies of gas this winter and beyond. pic.twitter.com/j1sVcv10z6 [8]

Since the invasion of Ukraine, the EU has been seeking alternative energy supply routes. According to a statement [10] by the European Commission, “the EU external energy engagement strategy [11] accompanying the REPowerEU plan [12], the Commission recognizes that the Southern Gas Corridor plays a key role in the diversification of natural gas supply to the EU, in particular for South Eastern European countries.”

President Ilham Aliyev also praised [13] the deal, calling it a “roadmap for the future” and noting that [14] “long-lasting, predictable and very reliable cooperation between EU and Azerbaijan in the field of energy is a big asset.”

How much of a “big asset” Azerbaijan can be, however, remains to be seen [15]. According to journalist David O'Byrne who covers energy issues, the signed memorandum and its six sections, “are little more than a wish list of what both sides would like to see happen, given the right circumstances.” On Azerbaijan's side, the biggest question asked is whether the country can actually provide the extra gas, and even if it does, writes [15] O'Byrne, “the extra 10 billion cubic meters will make little difference” compared to the 150 billion cubic meters received from Russia. The International Energy Agency agrees [16]. According to a recent Foreign Policy piece [16], if home thermostats are reduced by 1 degree Celsius that in itself “would save 10 billion cubic meters in gas,” says the Agency.

Similarly, Eldar Mamedov wrote an opinion piece [17] arguing the five-page memorandum reads “more like a long list of ‘endeavors’ rather than firm commitments.” The only part of the memorandum that contains a concrete proposal is Azerbaijan doubling its gas exports. “But even that target” writes Mamedov, “is couched in non-committal language — Baku is only supposed to ‘aspire’ to double its gas exports. The document does not commit it to actually doing so.”

As both EU and Azerbaijan presidents applauded the deal, the human rights groups were quick to raise concerns. For long-time observers of Azerbaijan, the European Commission president's description of Azerbaijan as a “crucial” and “reliable” partner was rather cringe-worthy.

President Ilham Aliyev, has ruled the country for the last 19 years. During his time, scores of local civil society activists have faced persecution while the country's freedom scores [18] have deteriorated [19] with each presidential term. Changes in legislation have incapacitated local civil society groups, taking away their ability to receive foreign funding or safely pursue their work. From total media control [20] to full power consolidation [21], President Ilham Aliyev's leadership can be anything but “reliable” said critics of the new agreement. As such, the critical response of international rights watchdogs to the signed memorandum was not surprising. “EU should not have signed deals with Azerbaijan without conditioning it to the release of political detainees and repeal of laws crushing media & civil society. Azerbaijan leaders will not be reliable partners as long as they are crushing dissent,” wrote [22] Philippe Dam, acting EU Director at Human Rights Watch on Twitter.

In a Twitter thread, Transparency International reminded [23] the president of the European Commission of Azerbaijan's track record in recent years. “As you move to reduce energy dependence on Russia’s kleptocratic regime, you cannot ignore that so recently Azerbaijan’s ruling elite was exposed as buying influence from European politicians to earn a ‘trustworthy’ image,” tweeted Transparency International. The international organization listed a series [24] of investigations that exposed how Azerbaijan was engaged in “systemic bribery to downplay its abysmal human rights record in European debates.”

The Daphne Caruana Galizia Foundation said in an interview [25] with The Shift News, “the EU's decision to sanction Russia and then sign an agreement with another state run by a kleptocrat is questionable, as it is partly replacing reliance on one kleptocratic state with a long-term reliance on another.”

And it was not only international rights watchdogs who voiced criticism after the signing of the agreement. Several members of the European Parliament have criticized the deal too. “Dictatorships are not ‘trustworthy’. Not for democracies, not for Europe and especially not for the citizens they brutally oppress,” tweeted [26] MEP Daniel Freund. While Viola von Cramon, said in tweet [27], “Azerbaijan remains a very unsavory partner in all areas.”

Let‘s not make the old „whitewashing“ mistakes and declare a bad option a „trustworthy“ one. Azerbaijan is an authoritarian regime with a terrible human rights record. https://t.co/mV4drskhDZ [28]

While Vice President of the German Federal Parliament tweeted [30] on July 18 that while it was right for the EU to strengthen its independence from Russian energy supplies, the union should not forget human rights and that it must “insist on their observance and enabling of freedom and democracy.”

Watchdog groups have expressed concern over the EU cozying up with rulers like Aliyev. In 2017, Bankwatch Network wrote [31] about the “EU locking arms with the Azerbaijan's authoritarian ruler Ilham Aliyev, despite Europe's commitment to human rights.” Azerbaijan also failed to meet its commitments as part of the EU-Azerbaijan Partnership Priorities [32].

According [33] to a recent report by the European Commission High Representative of the Union for Foreign Affairs and Security Policy, although Azerbaijan made strides in strengthening its economy — especially after the pandemic — the same could not be said about the country's good governance, democracy, rule of law, and human rights. The report highlighted problems in the legislative track — existing restrictive bills like the new Media law [34] — as well as continuing “deficiencies in ensuring the protection of human rights and fundamental freedoms, notably restrictions on freedom of assembly, association and expression.”

As such, analysts have described [17] the recent deal as a win for the leadership in Azerbaijan. “How can this be anything more than a badly-advised PR stunt that benefits the Aliyev family rather than the people of the EU and Azerbaijan?” asked [25] a spokesperson for the Daphne Caruana Galizia Foundation in an interview with The Shift News.