These songs have been sources of national pride and politicization 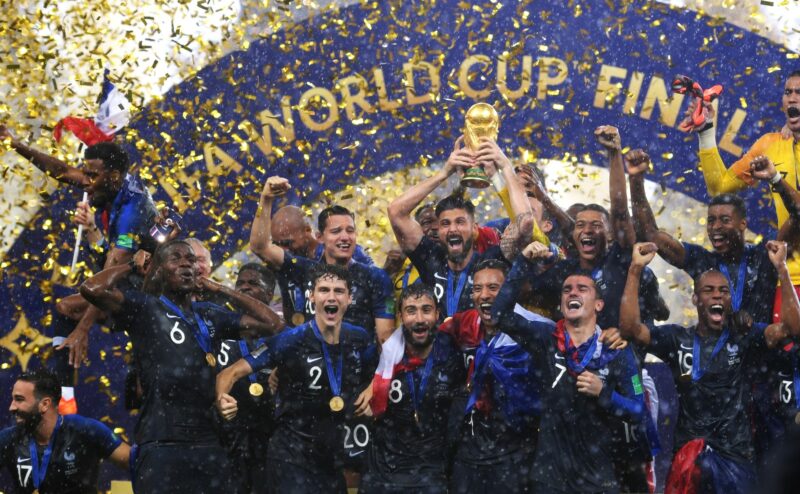 “File:France champion of the Football World Cup Russia 2018.jpg” by Russian Presidential Press and Information Office is licensed under CC BY 4.0.

The World Cup will kick off in Qatar in November 2022, which means the official World Cup anthem will soon be introduced. The organizing committee first established the theme song tradition during the 1962 FIFA World Cup in Chile, when organizers used songs and anthems to generate interest ahead of the games. Sixty years on, this tradition has caught on and is often one of the main highlights before the tournament. The has historically offered a platform for already established top musicians as well as emerging artists.

Whereas some anthems became instant hits, capturing the imagination of sports fans and laypeople alike, there are also those that were a total miss. This list features some ‌of the top anthems since 1962.

FIFA released the most recent theme song in April 2022 for the Qatar games. It already has over 14 million hits on YouTube, signifying it might be one for the charts. The choice of artists also may have informed the popularity of the song‌. Various bandmates bring together voices from the Americas, Africa, and the Middle East. Trinidad Cardon is an African-American/Mexican R&B musician, Davido is a Nigerian musician who blends local and English languages, and AISHA who has Arabic roots. FIFA Chief Commercial Officer Kay Madati commented on the multicultural roots of the song, saying, “This song symbolizes how music and football can connect the world.”

The lyrics express a bright outlook on the future that is both hopeful and cheerful.

Life can be up and down, but what can you do? Eh
We navigate through all the rough and the smooth, yeah
We got that rock and roll, that rhythm and blues, yeah-yeah
I'm never blue if I am rockin’ with you, oh-oh…

It has drawn reactions from audiences across the world going by some of the Twitter comments;

I'm not here to bant no one. I'm only here to hype Davido. Fifa featuring him in the 2022 world cup theme song was a win for him, his fans, Nigeria and Africa. #ThankyouDavido

Basketmouth has hailed Davido for singlehandedly taking Nigeria to the World Cup via his feature on the theme song for Qatar 2022 pic.twitter.com/ewvUUEoxDW

As the tournament draws closer, it is bound to be on heavy rotation. It is, however, still too early to tell how it will perform on the charts.

Here are some other hits and misses from over the years.

The first World Cup song was sung during the Chilean games in 1962, “El Rock del Mundial” (“The Rock of the World Cup”), composed by Los Ramblers and produced by Jorge Rojas Astorga. The song became a major hit in South America, selling over 2 million copies. They released it as a single a few weeks after the start of the 1962 World Cup, and the group went on a national tour buttressing the success of the song. It established the tradition which has seen a raft of songs become hits, springboarding countless musicians onto the global scene.

In 1978, Argentina hosted the World Cup under controversial circumstances of a military regime that sought to use hosting the event to assuage its citizens — a practice known as sportswashing. Perhaps too, this informed the choice of the song El Mundial (translated to The World Cup) performed by the capital city’s symphony Buenos Aires Musical and composed by legendary Italian composed Ennio Morricone.

It may have inspired the country to play at its best as Argentina emerged winners after a well-fought final with the favored Netherlands, ending in a 3–1 for the home team.

In 1998, they hosted the World Cup in France. Ricky Martin recorded the theme song titled La Copa De La Vida (The Cup of Life). A catchy, energetic, and fun song, it had everything fans wanted in a World Cup theme song. It also helped him transition to international success, and he was invited to perform at the Grammys in the same year, earning a standing ovation.

Waka Waka – This Time for Africa – Shakira and Freshly Ground (2010) 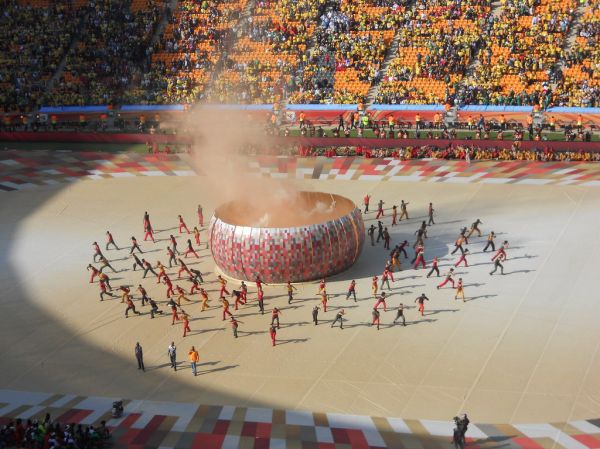 In its Africa debut, it hosted the 2010 World Cup tournament in South Africa. Organizers decided this year's theme song needed to have wide appeal not just across the world but also in the “motherland.”

The choice of the song and artist was controversial as critics felt that Shakira did not represent the South African audience, and so to ease off the blow, local act Freshly Ground was incorporated in the final version of the song.

The song’s title was a rendition of a famous Cameroonian group, Golden Sound, titled Zamina mina Zangalewa. The song had been a hit in 1986 (coincidentally a World Cup year…), released by a group of musicians who were former army men looking to poke some fun into their careers and as a rallying call, too.

The song achieved critical success charting at number 38 on the Billboards charts and going platinum. It has also continually received high viewership online on the YouTube channel and sold over 10 million units between 201 and 014.

With England getting to host the World Cup for the first time, they left it to Lonnie Donnegun to craft a song to welcome the global audience to the home of the game. Perhaps that history was lost on the composer, or perhaps the initial theft (and recovery) of the original version of the trophy inspired little.

The song was an ode to the mascot Willie — a first for the World Cup, featuring an old lion dressed in the English or British flag. It would become a mainstay of subsequent tournaments to have a mascot, opening the door for merchandising opportunities.

Interestingly, though, the English team won the Cup, and it has remained its only win to date.

Un’Estate Italiana (To Be Number One) – Giorgio Moroder Project (1990)

The song for the 1990 Italian World Cup was composed by Italian artists Eduardo Bennato and Gianni Nannini, and featured the Giorgio Moroder project, an English musical group. With its mellow tones, it did not quite resonate on local and global music charts. 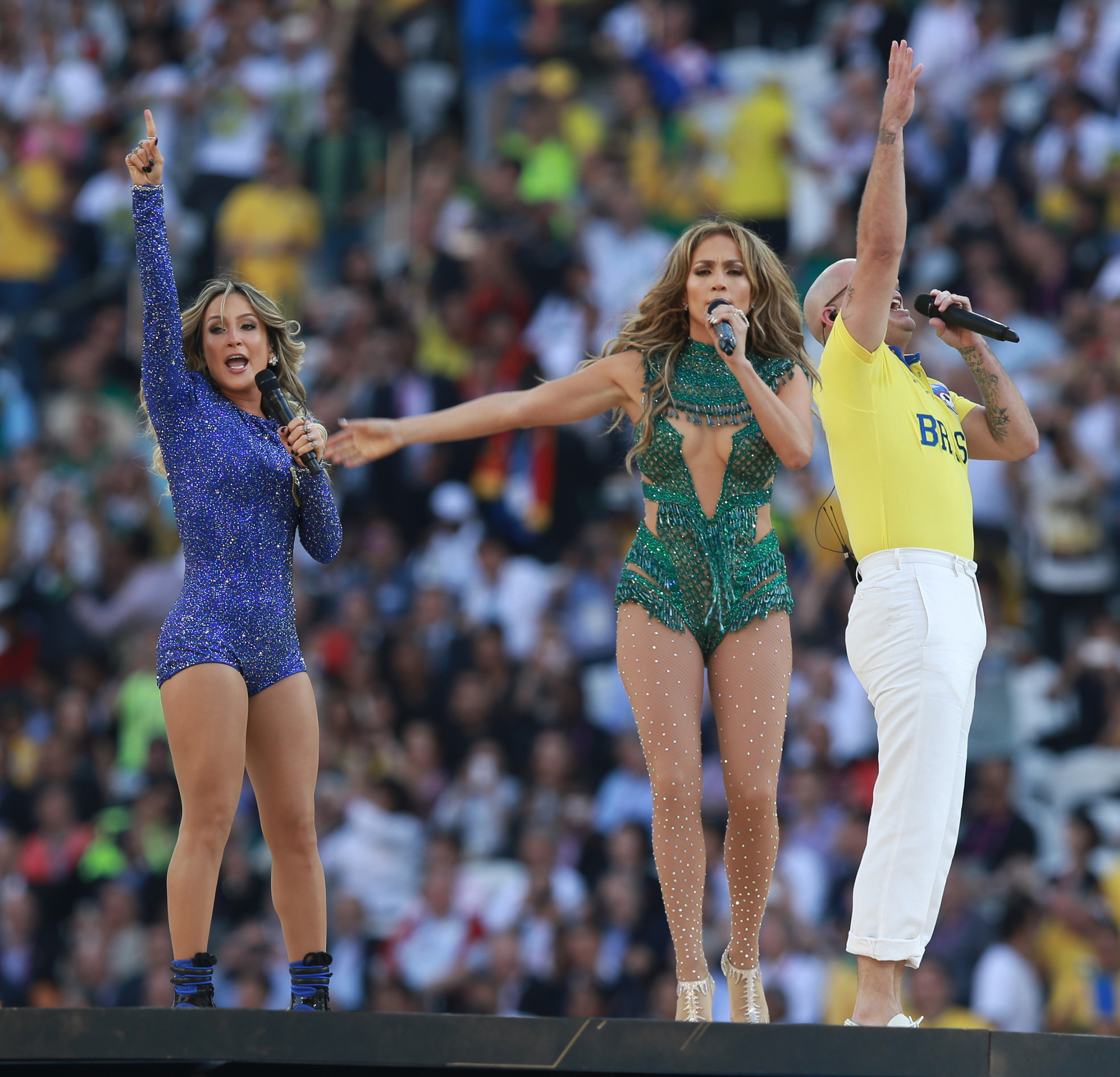 The opening ceremony of the FIFA World Cup 2014 36.jpg” by Danilo Borges/Portal da Copa is licensed under CC BY 3.0.

The 2014 Brazil games song featured not one but three musicians, with Latino musicians Pitbull featuring Jennifer Lopez and Brazillian singer Claudia Leitte. Just like the Waka Waka song by Shakira, some critics accused the song composers of ignoring local acts in favor of more star-studded names. Some Brazilians also felt like the song did not have a “Brazilian feeling.” Luis Antonio Giron of Epoca said that “Brazil only craves to be the same as what FIFA wants it to be. Brazil is fifalized.” Other critics questioned why Pitbull, who’s Cuban-American, and Jennifer Lopez, who is Bronx-born but with roots from Puerto Rica, were chosen.

Despite the criticism, Olodum, an Afro-Brazilian group that played the drums during the live performance, added a more authentic Brazilian feel to the song. It did score commercial success, especially in parts of Europe.

Though this song was not an official World Cup song, they sang it for the English national football team in the 1990s World Cup campaign. It went straight to the top of the charts and featured a guest rap section by English footballer John Barnes, which became an iconic piece of football culture. Here are the sample lyrics:

You've got to hold and give,

But do it at the right time,

You can be slow or fast,

But you must get to the line,

They'll always hit you and hurt you,

In 1998, Jamaica made history by qualifying as the first English-speaking country from the Caribbean islands. As would be expected, the country’s chief export, their music, specifically the reggae industry, dedicated a song to the national team. Diana King, Ziggy Marley, Ini Kamoze Shaggy, Maxi Priest, Buju Banton, and Roots, among other reggae artists, gave the boys a warm send-off. 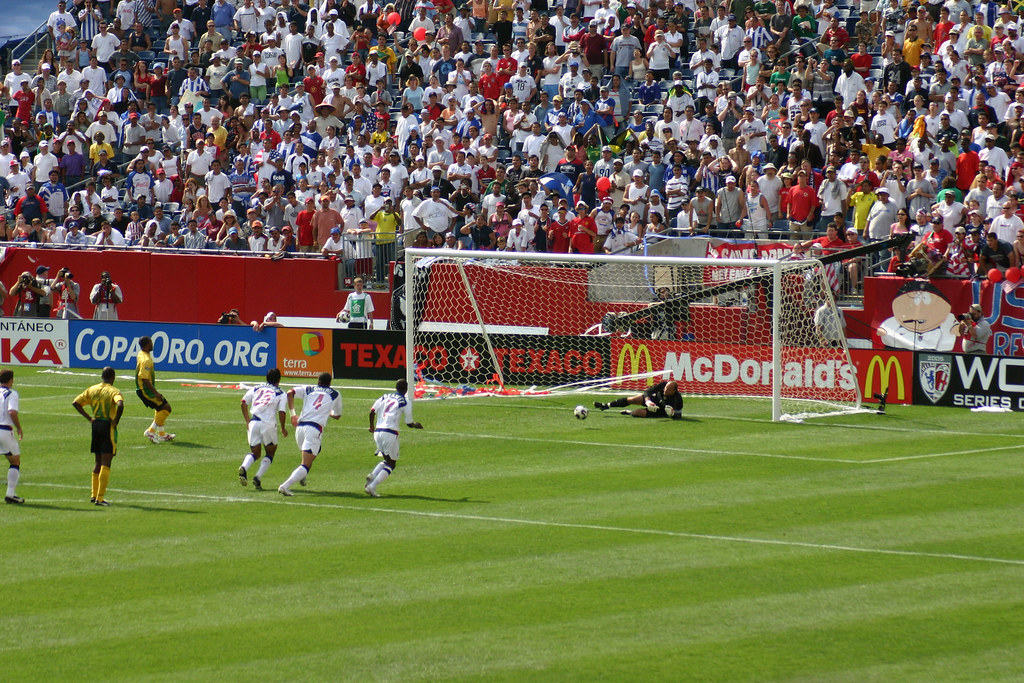 The Jamaican national football team – “Guessed right (or left, as the case may be)” by rcolonna is licensed under CC BY-NC-SA 2.0.

Many fans mistakenly thought this song was the official theme song for the 2010 World Cup.

The song by Somali-Canadian musician K’Naan was originally about the freedom and aspirations of the Somali people. After the 2010 Haiti earthquake, a collection of Canadian musicians together known as Young Artists redid it for a charity single dedicated to Haiti. It immediately reached number one on the Canadian Hot 100.

Here’s a playlist of all the World Cup anthems and honorary mentions: