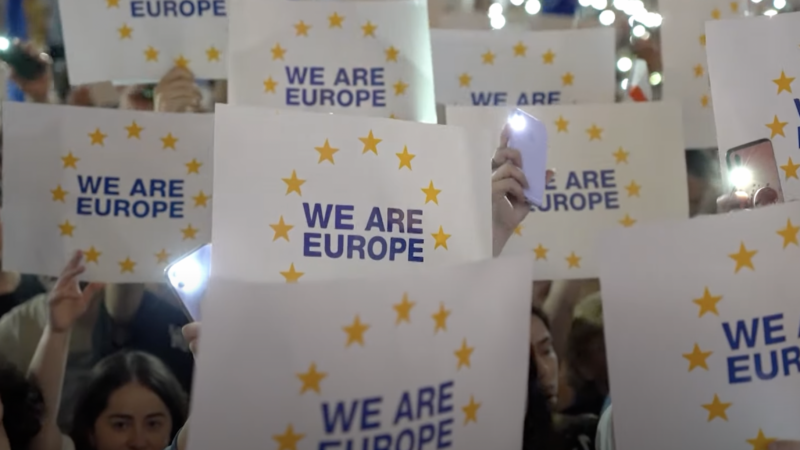 A recent spat between Georgia and its Western allies has been described as an “unprecedented sparring” as the country's ruling Georgian Dream Party continues to level accusations against US and EU diplomats. From claims of interfering in Georgia's judiciary to playing a “negative role” in the country's European Union accession plans, tensions have been heating since October 2020. The recent spats have reached Brussels and Washington DC, and both have responded separately to criticisms and accusations.

The tensions were first sparked in October 2020 when Georgia found itself engulfed in a political crisis following contested parliamentary election in which ruling Georgian Dream party secured victory. Since then, the country has witnessed a decline in press freedoms and numerous attacks on civil society, including the beating of journalists and the overall decline of democracy in the nation. For seven months, between October 2020 and April 2021, opposition parties boycotted the election results. Then, on April 19, 2021, with the mediation efforts from the US and the EU, the contesting parties reached an agreement signed by the ruling Georgian Dream Party and most opposition parties. The agreement included several judicial and electoral reforms and a promise by the Georgian Dream party to hold a new parliamentary election in October 2021. However, on July 28, 2021, the ruling party announced its decision to withdraw from the agreement.

“Wherever you look the picture is bad: poor conduct of elections, the politicization of the judiciary, the way the authorities failed to prevent violence against journalists and Gay Pride organizers in Tbilisi, revelations about surveillance of EU diplomats,” wrote Tom de Waal, a Senior Fellow at Carnegie Europe and a long time observer of Eastern Europe and the Caucasus at the time.

How it is going

In a daily briefing on July 20, State Department spokesman Ned Price said, “Disinformation and personal attacks on Ambassador Degnan or her team are not consistent with how partners communicate with one other, and we will continue to focus on supporting our shared goals.” Similarly, the spokesperson for Josep Borrell, EU high representative for foreign affairs, said:

Georgia: Delivery on reforms & EU agenda is task for domestic politicians.Blaming others for own unfulfilled ambitions only confirms the need 2have more time 2understand how 🇪🇺 works & that reforms are a homework. EU fully supports @CarlHartzellEU who did great job 4 🇪🇺🇬🇪 ties!

In May 2022, Dimitri Khundadze, a former member of the ruling party, “endorsed a suggestion by a Georgian Dream supporter” implicating the US in the founder of the ruling Georgian Dream party, former Prime Minister Bidzina Ivanishvili's “recent problems making financial transactions abroad, a leaked recording of Ivanishvili’s conversation with Russian oligarch Vladimir Yevtushenkov, and other developments ‘to force Ivanishvili back into politics again’ as well as to ‘involve the country into war,’” reported OC Media.

Ivanishvili is a key figure in Georgian politics. He made his fortune in the pre-Putin era in Russia and founded the Georgian Dream party in 2012. Although, Ivanishvili publicly announced his decision to leave politics in 2021, some believe he is still calling the shots behind the scenes.

In June 2022, following Georgia's hasty decision to apply for the European Union's membership, the country's application was deferred under the pretext that the country must fulfill a list of criteria before being considered as a candidate. The same month, the European Parliament adopted a resolution “on violations of media freedom and the safety of journalists in Georgia.” The document called on Georgian officials to impose personal sanctions on Ivanishvili “for his role in the deterioration of the political process in Georgia.”

Rushing to Ivanishvili's defense and criticizing the wording of the resolution, Irakli Kobakhidze, the chairman of the ruling Georgian Dream party, said, “It is deeply concerning that even such a high-ranking EU institution has fallen victim to one of the major maladies of the contemporary world, the so-called fake news,” in a June 9 press briefing.

Between July 20 and 21, during a European Parliament delegation visit to the capital Tbilisi, the country's leadership was reminded once again of the changes it must implement. The deadline for meeting the list of 12 requirements was extended to 2023. But in a July 21 interview with pro-government TV Imedi, Georgian Dream party chairperson Irakli Kobakhidze indicated once again the government's hostile position to its Western partners. “Georgia should be seen as a sovereign state by everyone and especially by diplomats,” Kobakhidze said reportedly accusing the head of outgoing EU delegation Ambassador Carl Hartzell of doing the opposite. Kobakhidze also accused Ambassador Hartzell of playing a negative role “in relations between the EU and Georgia.”

In addition to US and EU ambassadors who have been accused by ruling party representatives, earlier this month, Prime Minister Irakli Garibashvili lashed out at the former Swedish Prime Minister Carl Bildt, accusing him and his wife of “channeling millions out of the country under the United National Movement administration.” Bildt responded in a tweet:

This guy – I’m talking about the PM of🇬🇪 – is beyond repair. Accusing in a speech to parliament my wife of stealing millions from 🇬🇪 shows that he’s gone off the rails. He’s a tragedy for what is a very fine country. https://t.co/8mNyni3r13

German member of the parliament Viola von Cramon, who was among the EU delegates visiting Georgia this month has also faced criticism by officials on several occasions. The Georgian Dream party chair Irakli Kobakhidze called von Cramon “a patron of criminals” in May 2022. The German politician responded to the allegations via tweet:

Who can you take these guys seriously? It’s so sad to watch this. https://t.co/rfWoIgC9xT

In an interview with Politico this month, von Cramon also said it was “unwise to be personally attacking your main allies who daily defend Georgia's European aspirations in Brussels and elsewhere.” Such blunt criticisms made von Cramon question whether the Georgian government really wanted to become part of the EU.

Tensions continued escalating in May 2022, when Georgian Vice Prime Minister/Culture Minister Tea Tsulukiani accused von Cramon of interfering in Georgia's domestic politics. In a thread on Twitter, Viola von Cramon responded harshly. In one of the tweets, the German politician said the level of “disinformation [in Georgia] was reaching the Kremlin's level.”

Also, in July, Prime Minister Irakli Garibashvili wrote a letter to the European Commission President Ursula von der Leyen, in which he criticized the resolution adopted last month, and that it was aimed “at discrediting the current system of governance in Georgia.”

Meanwhile, the President of Georgia Salome Zurabishvili rebuked criticism from the ruling party officials against Western allies, including the diplomats, describing them as “unimaginable.” Zurabishvili tweeted her support for Georgia's path into the EU in a tweet during the EU Delegation visit to Georgia:

A very important visit by a delegation of the European Parliament, who come to Georgia to show support for a decisive process that will lead to our EU candidacy.

If we want what the Georgian people overwhelmingly supports, we all need to work in every format we can. pic.twitter.com/Y4xeTP8bbn

In June, thousands of Georgians took the streets to voice their support for the country's EU accession.