Abortion is allowed in Brazil only in three exceptional cases 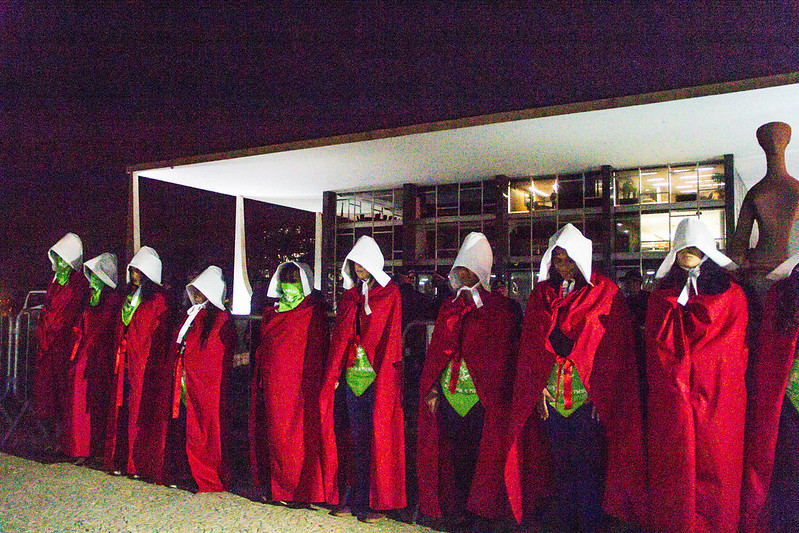 The stories of two women in Brazil who got pregnant and faced systemic barriers to abortion, despite policies that guarantee legal access to the procedures, recently exposed contradictions in the discourse of so-called “pro-life” supporters.

One of them, an 11-year-old rape survivor, was asked by a woman judge if she could “endure a little bit more” and keep the baby for a few more weeks, along with other questions seemingly to convince the child to continue the pregnancy. Recordings of the hearing were revealed by The Intercept on June 20.

In the hearing, the 11-year-old's mother, who took her to the hospital to abort the pregnancy, was asked by the judge if she understood that, in case of abortion, after being born, the baby would be left crying until it died, similar to comments made by the case public prosecutor to the girl herself — a false information about how the procedure works

The judge also told the girl's mother to consider adoption instead, suggesting the baby could bring joy to another family, as she was quoted saying: “Today's sadness for you and your daughter is the happiness of a couple.”

The case generated public outrage as abortion is guaranteed by Brazilian law in cases such as this. In this instance, despite the judge's overstepping, the girl ended up getting the procedure at the end of June.

Even after the legal abortion, however, the public prosecutor on the case asked the police to recover the fetus at the hospital to have the “cause of death” identified, as reported by The Intercept. The federal government also asked to investigate the medical team, according to Folha de S. Paulo newspaper.

The second story had a different outcome. On June 25, 21-year-old Brazilian actress Klara Castanho shared a letter with her millions of Instagram followers recounting her experience with sexual violence.

Klara was pressured to address rumors that she had a baby and put them up for adoption. A few days earlier, YouTuber/actress Antonia Fontenelle published a criticism-filled video suggesting a famous Brazillian actress had become pregnant and put the baby up for adoption. Fontenelle never named Klara, but described characteristics that allowed people to connect the dots. The story went public and further criticism and slandering poured in against Klara.

In her statement, Klara said she was raped in a place where she didn’t have friends or family around and that a piece of her died from that moment on. She ended up not reporting the rapist out of fear, but took a morning-after pill in an attempt to put the violent act behind her. After a while, she felt stomach pains and discovered she was pregnant while doing a tomography scan.

The physician said she was “obliged to love this baby” and forced her to listen to the heartbeat. Klara considered her options and decided to put the child up for adoption, notifying all public authorities responsible for the process.

Legally, there are procedures designed to protect the identity of both the mother and the baby in cases like this. Yet still, a hospital nurse appeared to threaten Klara, asking if she could imagine what would happen if a certain gossip columnist found out about the story — the case is under investigation by the hospital and professional councils.

The story was indeed leaked to gossip columns and eventually reached Fontenelle. Leo Dias, one of the columnists, hinted about the controversy in a talk show interview, before the case becoming public, and rushed to publish information about the baby soon after Klara published her statement. Metropoles, the news outlet where his column is hosted, deleted the article a few hours later and issued an apology.

I've been offline for a few hours. When I came back, a very sad surprise. We've exposed in an unacceptable manner information about a woman who is a victim of brutal violence. The article was withdrawn.

After Klara's open letter, Fontenelle, a known Jair Bolsonaro supporter who plans to run for Congress in the 2022 elections, recorded a new video claiming she didn't know about the rape. She claimed she wanted “to help Klara” to make her abuser pay for what he did, adding that rapists should face the death penalty.

Despite the attacks, Klara also received a wave of support from people who shamed the way the media handled the story and exposed Klara against her will. Some actors who worked with her in the past, like Paolla Oliveira, posted messages of support on Instagram:

Klara is a woman and she is suffering the persecution, accusation and judgment that society destines to us women.

It is not a discussion about to have or not have children. It's a discussion about how they control our bodies, minds and spirits. To the point that empathy and sorority are not unanimous among us. Women who potencialize the voices of our tormentors.

Abortion is considered a crime in the Brazilian Penal Code but is allowed under three exceptions: if the woman's life is at risk, if the pregnancy is the result of rape, or if the fetus has an anencephaly diagnosis.

In early June, the Health Ministry released a manual where it claimed that even in cases when it is allowed, abortion would be a crime if the pregnancy had surpassed the 22nd week, and physicians could be investigated for it.

Jota, an outlet specializing in the coverage of Brazillian laws, highlights that the current legislation does not establish a time limit for cases when the procedure is allowed and that, in those cases, the public health system should guarantee a legal abortion. Experts heard by Jota evaluated that “the document induces to error and puts even more pressure on physicians.”

A group of organizations created a campaign asking officials to withdraw the manual, affirming:

Among innumerable setbacks, the manual foresees criminal investigation on abused girls and women who access the service for legal abortion, orienting a gestational age to the procedure and creating legal confusion when stating that “every abortion is illegal, except in cases which it has an illicit exclusion.” Did you get it? Well, neither did we, and it is really about this — they want to create a general confusion to make the saga of girls even more painful when try to access a legal service.

The ministry held a public hearing to debate the manual on June 28. Raphael Câmara, who is responsible for the department behind the document, said that abortion does not represent a serious public health issue.

“We need to discuss what is a serious public health issue (…) If you interpret as such any disease that causes death, ok. But this discussion has to be made,” he said, according to G1 news outlet.

An article published by Piauí magazine shows that, in 2019, the Brazilian public health system registered 195,000 hospitalizations due to abortions — a daily average of 535. In every 100 cases, points the article, only one was guaranteed by law, while 99 were miscarriages or undetermined types of interruption.