Mongolia has one of the worst homicide rates in Asia 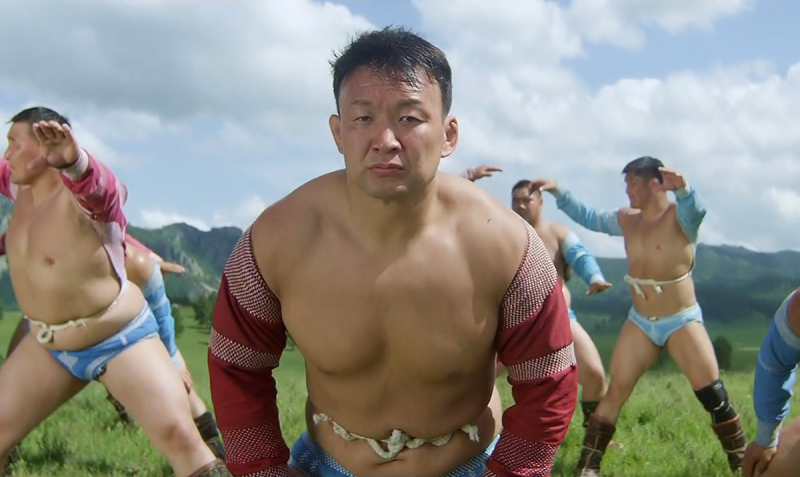 On June 9, 2022, the court of the Khan-Uul district of the Mongolian capital Ulaanbaatar sentenced the champion judoka and the former president of the Mongolian National Olympic Committee (MNOC) Naidangiin Tüvshinbayar to 16 years in jail for brutally murdering his childhood friend and a fellow judoka Erdenebilegiin Enkhbat, putting an end to a legal saga that kept the nation in awe for more than a year.

After becoming the first Mongolian to ever win an Olympic gold medal in Beijing 2008 and later, in London 2012, the first Mongolian Olympic multimedalist, Tüvshinbayar was destined to rise to stardom in a country that traditionally reveres wrestlers, and his success, according to Reuters, “prompted leaders from feuding parties to join thousands of revellers in the streets to celebrate their champion.” Indeed, he soon became known as the person whose victory helped Mongolia overcome the parliamentary deadlock between the rivals Democratic Party and Mongolian People’s Revolutionary Party (MPRP) following a post-election violence that claimed five lives in July 2008, while CNN would generously credit him as the sports legend who single-handedly sparked the country’s interest in judo.

Along with being decorated with the country’s highest professional and athletic awards and titles, including the Hero of Labor order (Хөдөлмөрийн баатар), he soon became one of the most prominent media icons in Mongolia, featuring in Pepsi ads and, of course, in political campaigns, as his fame as a “unifier of the Mongolians in times of trouble” carried on. Thus, he became the campaign promoter of the Democratic Party’s presidential candidate Khaltmaagiin Battulga, a former world champion wrestler, who would eventually win the elections in 2017 in the second round with a narrow margin of 50.6 percent. Besides being an extravagant and controversial politician and businessman, who named his group of companies “Genco,” in reference to the name of the Corleone family’s company in “The Godfather,” as well as the builder of the biggest equestrian statue in the world, Battulga was also the president of the Mongolian Judo Federation, so that the success of Mongolian judokas, including the Olympic triumph of Tüvshinbayar, was often attributed to him. 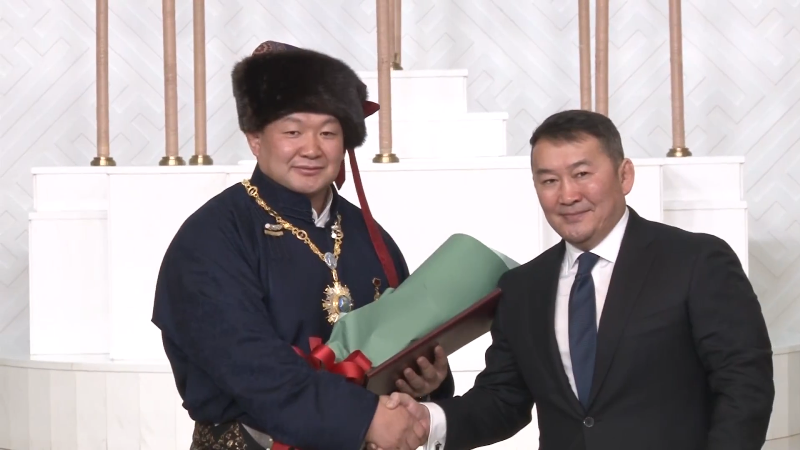 Mongolian president Khaltmaagiin Battulga (on the right) awards Naidangiin Tüvshinbayar (on the left) with the Order of Chinggis Khaan. Ulaanbaatar, November 19, 2017. Screenshot from the Battulga Khaltmaa YouTube channel

Already before the presidential elections of 2017 Tüvshinbayar was regarded as the protégé and a close associate of Battulga and the Democratic Party, so that in 2016 he, a native of the Zavkhan province, participated in the parliamentary elections in the Bayankhongor province in southwestern Mongolia, the traditional constituency of the president-to-be, just to scandalously lose by a margin of 98 votes. A few weeks later he gave up his bid for the third Olympic medal by losing in the first round at Rio 2016, and this failure was broadly linked to his involvement in the election campaign and neglecting athletic duties. In 2020, he was about to participate in the parliamentary elections again from the same district, but instead ran as a sole candidate for the presidency of the Mongolian National Olympic Committee with the backing of the country’s president, and was elected by a sweeping 94.6 percent. Interestingly, in February 2022, he was appointed the adviser to the current Prime Minister Luvsannamsrain Oyun-Erdene, who, by the way, serves as the chairman of the rival Mongolian People's Party.

However, after his protector became the president of Mongolia, Tüvshinbayar was accused of being a bully while gaining notoriety for his excessive alcohol consumption. Prior to the deadly brawl in 2021, he was involved in at least three instances of physical violence, one of them right on the eve of the presidential elections of 2017. The future president had to deny it and even defended Tüvshinbayar in a public interview while casting his vote:

How could that be possible? You should stop believing in such things. Not only would champion Tüvshinbayar never beat a person, he would never touch anybody.

The president would be proven wrong. On April 2, 2021, while meeting with a few prominent Democratic Party figures from his native Zavkhan province, including the provincial governor, chairperson and representatives of the municipal council, an intoxicated Tüvshinbayar attacked and beat up his childhood friend and a promising star of Mongolian wrestling (үндэсний бөх), the holder of the rank of “national falcon” (улсын начин), Erdenebilegiin Enkhbat, after allegedly knocking him out with a heavy object. Suffering from numerous traumas and severe brain damage, Enkhbat passed away in a South Korean clinic on December 24, 2021 at the age of 37, without regaining consciousness.

Photo: Paying our last respects to the late E. Enkhbat, the promising falcon of Mongolia

After the bloody assault, many were hesitant to openly blame the legendary athlete, as was the case of the Prime Minister Oyun-Erdene, who bluntly stated that it was “inappropriate for him to say whether Tüvshinbayar was right or wrong,” praising, nevertheless, his “glorious” deeds in unifying the nation during the time of turmoil. Today, after more than a year since the heinous attack, the legendary hero who gave honor to the nation is slowly but steadily turning into a national villain, taking along with him the political reputation of the former president Battulga.

In the meantime, according to the United Nations Office on Drugs and Crime (UNODC) data, Mongolia holds one of the worst homicide rates in Asia ranging annually between 7.24 and 5.98 (per 100,000 population) between 2014 and 2020, compared to that of  6.66 of Afghanistan (2018), 3.23 of Kazakhstan (2020), and 2.19 of Kyrgyzstan (2018). In Europe, only Russia has a higher homicide rate of 10.7 (2020). According to the World Health Organization (WHO) homicide data, in 2019, 197 intentional homicides were registered in Mongolia, compared to 90 in Georgia, the country with a compatible population. According to official national statistical data, the number of criminal actions causing deaths (intentional and unintentional homicides, accidents, suicides and inducing to suicide) rose by 17.3 percent from 382 in 2020 to 448 in 2021. According to a parliamentary report, between 70 to 80 percent of intentional murders in the country are committed under the influence of alcohol. What is even more alarming, for the first six months of 2022, the overall crime rate in Mongolia rose by a frightening  89.9 percent compared to the same period of 2021.