Meanwhile, Pacific superpowers vie for dominance in the region 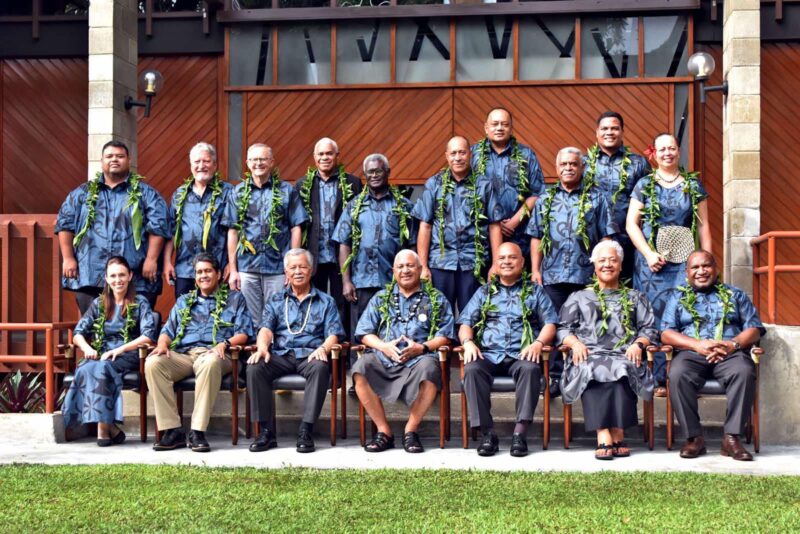 Leaders of the Pacific Islands Forum (PIF) during their meeting in Suva, Fiji. Source: Facebook page of PIF

In a huge blow to regional cooperation, Kiribati, an island country with a population of about 120,000, withdrew from the Pacific Islands Forum (PIF) to protest the body's failure to address concerns from the Micronesian countries. This includes not adhering to a previous agreement that the next leader of the group should come from The Federated State of Micronesia, an archipelago comprised of 607 islands.

Kiribati President Taneti Maamau announced this decision in a letter to the PIF on July 9, just before the PIF meeting on July 11–14 in Suva, Fiji.

PIF is an 18-nation body established in 1971 and has served as an inter-government organization promoting cooperation among countries in Oceania.

The meeting was held as Pacific powers vie for geopolitical influence in the region. Conventionally, the U.S. has established strong bilateral relations with its Compact of Free Association agreements with Palau, the Marshall Islands, and Micronesia.

Yet, in recent years, China has included the Pacific region in its Belt and Road Initiative and has established a stronger presence through high-level visits, as reflected in the recent 10-day regional tour of its Foreign Minister, Wang Yi. The country's recent security pact with the Solomon Islands has triggered strong reactions because of its potential impact on regional security. There are concerns in Australia and the United States that the deal could lead to the construction of a Chinese military base in the Solomon Islands,  though Beijing has denied this.

In response to China's growing diplomatic engagement, Australia's Foreign Minister Penny Wong made at least three trips to the Pacific region after the new government came into power in May. For its part, the United States announced its “Partners in the Blue Pacific” initiative, which indicates its commitment to cementing itself as a dominant power in the region.

Caught in the escalating diplomatic tension, several PIF members from Micronesia threatened to leave the group in 2021 because of the non-election of their candidate, among other concerns.

After numerous discussions, PIF officials reached a consensus that there would be a rotating leadership in the Pacific’s subregions of Melanesia, Polynesia, and Micronesia.

Kiribati claims it was not consulted about this new agreement. Maamau’s letter to the PIF elaborates on the reasons why Kiribati withdrew from the group:

For Kiribati, this is a matter of principle and one that touches on the need for equity, equality and the inclusiveness of all members in the architecture of our premier regional institution. We believe that these are the very same principles that underpins our collective efforts to promote, uphold and strengthen Pacific regionalism.

Maamau added that the withdrawal is not meant to offend anyone:

It is meant to be a reminder to us all that our solidarity and unity as a region is dependent on how we treat each other with profound respect and understanding as we work through the challenges that we face as a region.

During the PIF meeting, leaders “acknowledged with sadness” Kiribati’s decision as they remained hopeful that a continuing dialogue will address the issues raised by Maamau. An excerpt from the forum communique:

Leaders echoed the sentiments conveyed by the Forum Chair that the people and Government of Kiribati will always be a part of the Blue Pacific Family, and committed to continue to dialogue towards a resolution to restore the unity of the Forum Family.

During the July 11–14 forum, PIF tackled key issues affecting the region, such as the climate crisis and reviving island economies battered by the pandemic.

Ms Lambourne said the decision was puzzling and was dismayed that no political consultation was held beforehand.https://t.co/9uX8OfLiHd pic.twitter.com/3QoN9Anipk

Lambourne said she suspects that the decision is linked to China’s increasing presence in the region. She said in a media interview:

My assessment is that maybe China wants to isolate us from the rest of the forum, because they don't want us to be part of the region that Australia and New Zealand is part of and have perhaps more influence over than any other.

“China wants to isolate us.” Kiribati’s opposition leader is clear on who she believes is behind her nation’s withdrawal from the Pacific Islands Forum. Tessie Lambourne told me she believes her government is “bending over backwards to accommodate the interest of China.” @SBSNews pic.twitter.com/89emO9vrsJ

Former Kiribati president Anote Tong believes that China and the Maamau government might be “cooking something” after the country's withdrawal from PIF. He added in a media interview that Maamau might be hoping to “gain from being isolated from the region” by making a deal directly with China.

The Chinese Embassy in Kiribati has refuted the allegations:

It’s irresponsible and misleading for certain international media and politicians to make false and unprofessional statement and report which shows disrespect to both Kiribati and China.

China always sticks to the principle of non-interference of internal affairs and promotes win-win cooperation on the basis of mutual respect and equality.

Whatever may be the case, Kiribati’s withdrawal from the PIF has undermined regional unity amid intensifying rivalry between bigger and richer nations in the Pacific.