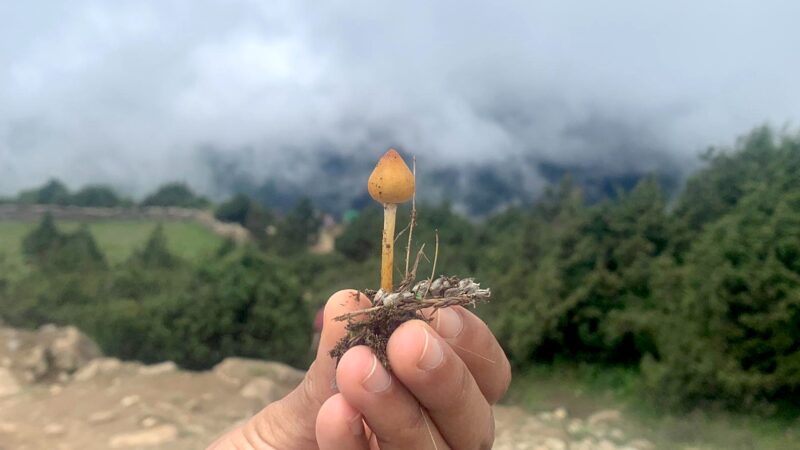 Image by Sarah Watson, via Nepali Times. Used with permission.

This article [1] by Sarah Watson was first published in Nepali Times and a shortened and edited version is republished on Global Voices as part of a content-sharing agreement.

For 25 years, Ang Jangmu Sherpa collected mushrooms in forests near her lodge in Tengboche [2] village located at an altitude of 3,867 metres (12,687 ft) in Nepal. Just one local mushroom, known locally as “petak,” provides enough for one meal.

Bhesh Rag Dahal collects and dries mushrooms for the winter months in his restaurant in Tashingma. Since mushrooms keep so well, he still has a store of mushrooms that was not consumed when tourism collapsed during the pandemic. He can sell the mushrooms in the market for NPR 10,000 (USD 78) a kilogram. Otherwise, he gives them away as prized gifts to relatives and lamas [3] (Buddhist teachers) at Tengboche and other monasteries. 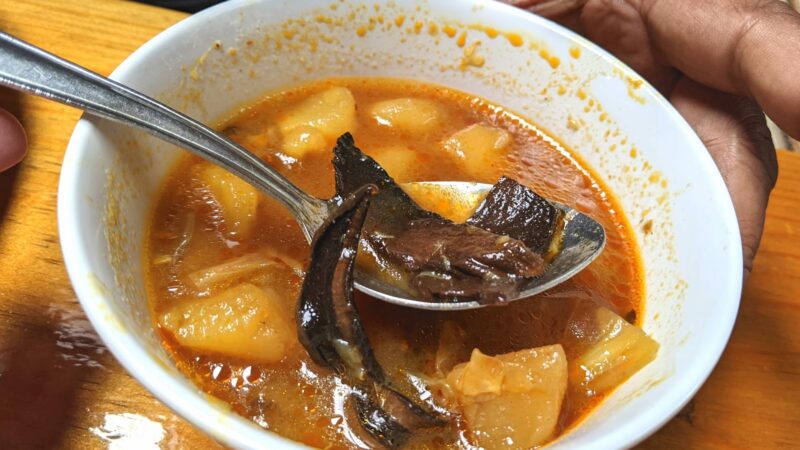 In the Solu Khumbu district at the lap of Mt Everest [4], edible mushrooms are an integral part of the local diet and an immense, overlooked part of the biodiversity of the Himalayas [5].

Now, a group of Nepali and American mycologists — scientists who study fungi [6] — are identifying mushrooms on a first-ever eco-tourism trek to Everest Base Camp.

The three-week expedition that started out in mid-June this year was organised by International Mountain Trekking (IMT), and included an international team from Nepal, the US, and Mexico. Nepali mycologist and botanist Shiva Devkota and US mycologists Britt Bunyard and Thomas Roehl identified over 150 species of mushroom on the trip. 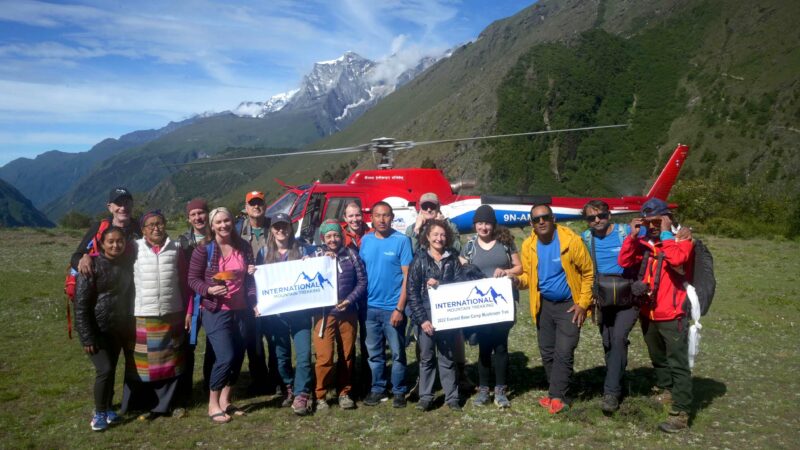 A group of Nepali and American mycologists as well as citizen scientists pose for a picture. Photo by Alok Tuladhar via Nepali Times. Used with permission.

Thousands of trekkers and mountaineers make the journey to Everest Base Camps [7] annually, but few of them notice the hundreds of species of mushrooms growing alongside the trail.

“I had always seen mushrooms, but I was always in too big a hurry,” says IMT’s Richard Silber who hopes eco-tourism treks will allow the Everest region to be recognised for its biodiversity and the rich fungi populations beyond its mountains.

Silber worked with Devkota and Sonam Jangbu Sherpa also of IMT to construct the first ecological tourism trek of its kind. In addition to mycologists, citizen scientists with an interest in mushrooms joined the trek, guided by Phu Chiri Sherpa and Tenzing Tashi Sherpa. 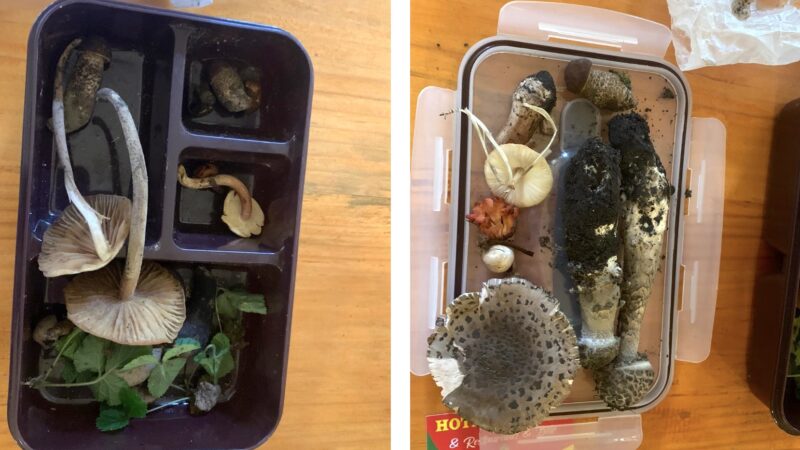 “There is this amazing biodiversity in Nepal — uniquely true because of the extraordinary altitude gradient — within a short band the terrain goes from 6,000ft [1829 meters] to the highest point on earth,” Silber says.

The Solu Khumbu [8]’s altitude variation creates niches for hundreds of unique tree species, making it a rich environment for fungi to grow in relationship with the vegetation. Until now, the region’s mushrooms had never been systematically catalogued.

Devkota holds a PhD in mushroom research and says: “To make conservation and management plans, first we should explore what kind of mushroom species we have. I realised there was a gap and an opportunity.”

Now there is a push for scientists all over to document things before the precious mushrooms are gone. Says Bunyard: “The forest here is covered with life, but this is one of the most understudied parts of the world. There are no books here, it’s kind of a black box.” 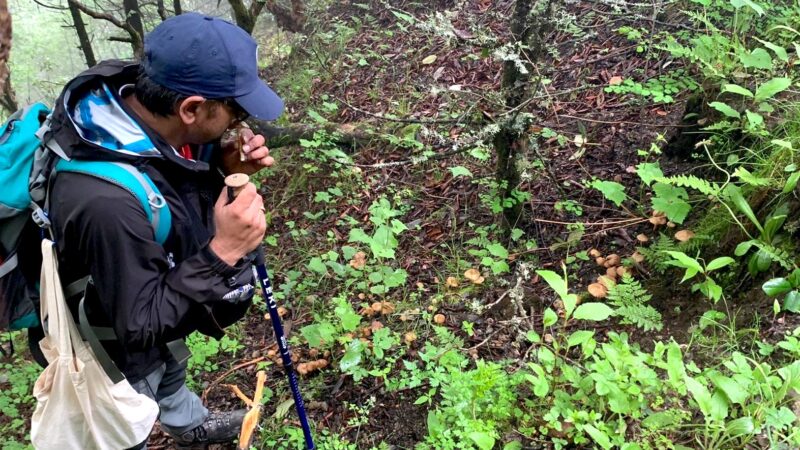 Fungi do not exist in isolation, but are critical to ecosystems. They enrich the diversity of life in the biosphere. “They are partners for pretty much all plants,” adds Bunyard.

“If you killed all the fungi on the planet, all the trees would die. So fungi are basically responsible for the life of everyone on the surface of the world,” adds Thomas Roehl.

When an environment is damaged by human activity, fungi can still thrive, and in some cases, help jumpstart new life. They also signify ecosystem health. Fungi can be used to indicate air pollution levels, as they struggle to survive in areas with heavy emissions.

Even before entering Sagarmatha National Park [9] in the Himalayas of eastern Nepal, the expedition had already identified over 60 types of mushroom, including sightings of rarely viewed species. 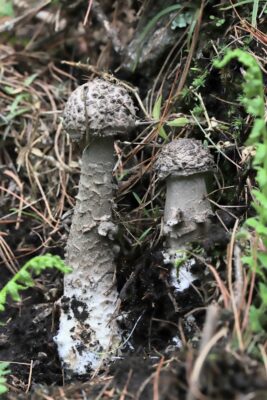 Amanita tullosiana, a highly poisonous mushroom species identified by scientists during the trek. Photo by Thomas Roehl via Nepali Times. Used with permission.

The team found Tremella [10] salmonea, first described in 2019, and documented Amanita tullossiana, a new species found in 2019 in the Indian Himalayas.

The researchers believe they identified Amanita innatifibrilla, a species with limited data and unknown range, but once documented in southern China. The team identified the highest mushroom ever found at an altitude of 5,193m.

The researchers worked as they walked, identifying new mushrooms and explaining their discoveries to citizen scientists.

“This is unlike what you see in any academic institution,” explained Silber during the trek, describing the way the mycologists worked in the field. “They are drawn to the mushrooms like a magnet. They glom onto it. It’s inspiring, really, it’s cool as hell.”

In addition to adding to Nepal’s mushroom database, Silber hopes this mushroom-focused trek is a model for future ecological tourism. In other parts of Nepal, tourists join treks for bird, crocodile, or tiger watching, and the Everest region’s botany, geology, and biodiversity could offer similar opportunities for tourism during the climbing off-season. 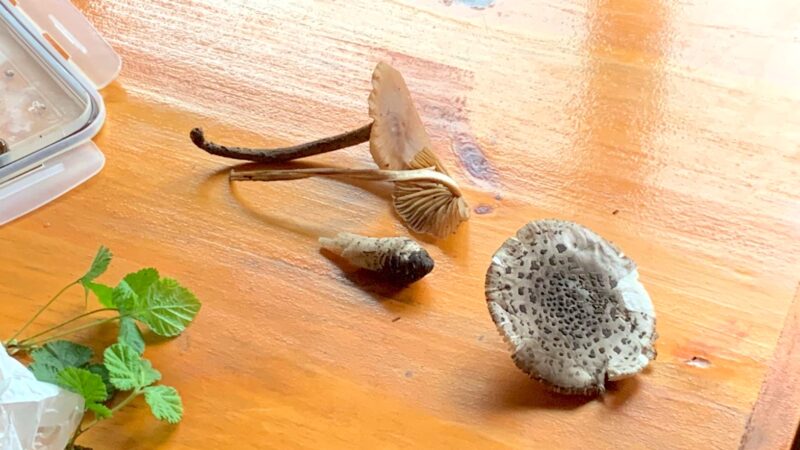 Bhumiraj Upadhyaya, Chief Conservation Officer at Sagarmatha National Park, has worked in the national park system for over 30 years, but this is the first mushroom-focused trek he has seen. “Almost all the tourists come here just to see mountains,” he says. “There is so much more here than just the mountains.” He explains that major research gaps still remain for snow leopards, musk deer, and pollution nearby the Gokyo lakes [11]. 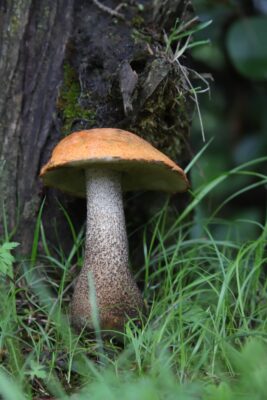 Leccinum aurantiacum, a very popular and edible species of mushroom found in Nepal. Photo by Thomas Roehl via Nepali Times. Used with permission.

Scientific research in the region, however, is limited, due to irregular flights, high costs, and poor road conditions. Researchers are far more likely to go to the more accessible Annapurna [12] or Chitwan [13] regions.

Locals grow their own mushrooms or, more often, forage in nearby forests. Mushrooms can be dried, stored, and rehydrated for future use, which benefits the lodges that are overwhelmed with tourists in the spring and fall.

Further scientific analysis of the region’s mushrooms could benefit those that rely on the food group. “Perhaps in the future, more people can know about edible mushrooms,” Jangbu Sherpa says. “During the winter there are no vegetables, so we can collect and dry them for the winter.”

Another mushroom tour is already being planned for 2023, and Silber hopes that scientific activity in the Solu Khumbu can become accessible and community-based. “Of course, it is hard to do science in remote areas. If you want to get up here and do this kind of work, it’s a big and an important commitment,” he says. 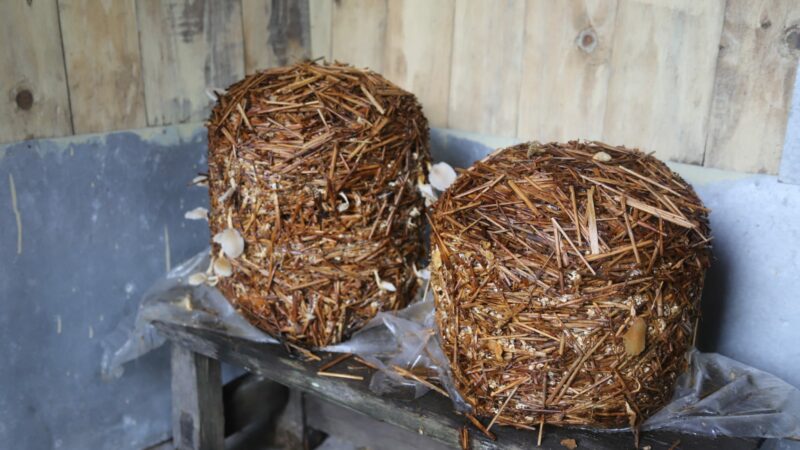 Oyster mushrooms growing in a farmhouse. Photo by Thomas Roehl via Nepali Times. Used with permission.

For future projects and research, IMT hopes to work with local populations, including building a science centre with a donated house in Phortse. The main goal of the research is to help local communities benefit from the knowledge.

“We know through history that western scientists come in, do their work, and leave,” says Silber. “They do not engage or train locals, that’s not part of the research protocol. And it is a big missed opportunity in any community.”