Okutoyi and Maxine's wins put Kenyan women in the spotlight 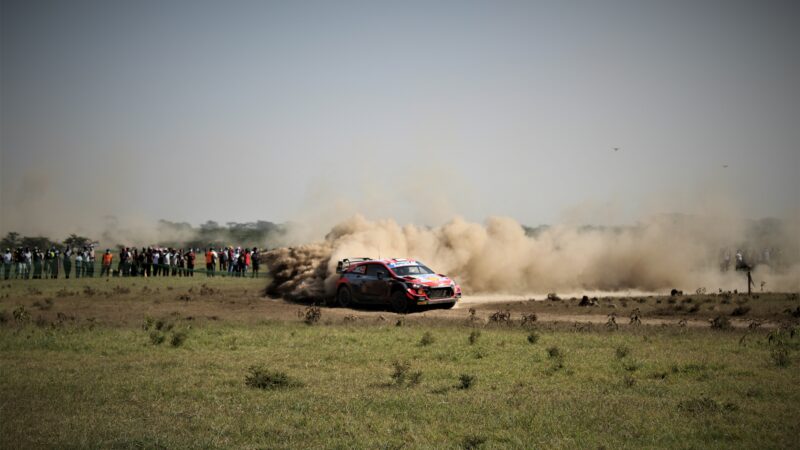 A rally car throws up dust at the recent WRC Safari Rally in Naivasha, Kenya. Photo by Richard Wanjohi (author)

For a country that has become synonymous with producing international running champions, Kenyan sportswomen Angela Okutoyi, a tennis player, and Maxine Wahome, a rally driver, are dominating new fields to challenge Kenya's reputation as a single-sport country.

Angella Okutoyi became the first Kenyan woman to win a Grand Slam title on July 10. Together with Rose Marie Nijkamp from the Netherlands, they beat Canadians Kayla Cross and Victoria Mboko 3–6, 6–4, 11–9 winning the doubles junior title at Wimbledon Open.

Earlier this year, she made history by being the first Kenyan to ever win a set at a Grand Slam event at the Australian Open in Sydney, Australia. She reached the third round of the Aussie Open, eventually losing to Serbian Lola Radivojevic after losing straight sets of 6–2, 6–3 during the third round match played at Melbourne Park Arena.

Raised by her grandmother after her mother died while giving birth to her, her achievements have been hailed as remarkable by both tennis and sports pundits. In a feat of mental grit and resilience, she enrolled at the ITF East Africa Regional Training center when she was just ten years old, enabling her to hone her skills in the game.

She’s currently the highest-ranked African in the International Tennis Federation (ITF) rankings and is rated 61st internationally. Okutoyi is also the reigning Africa Junior Champion (under-18). She hopes her exploits in the tennis Grand Slam events — Australia, French, and now Wimbledon — will encourage more Kenyans to take up a racket.

DOUBLES CHAMPIONS @Wimbledon
I have no words to be honest but just to give my gratitude to my partner of course,@ITFTennis , #GSPDP , my coaches, and my coach back home @wanjiii, @MEsipisu , @tennis_kenya , @OlympicsKe , family and truly to all of you back home🙏 pic.twitter.com/uXjJMCnZvb

As news of her victory spread, messages of platitude poured in from Wimbledon, Jenny Hill, Head of the Office of the High Commission of Canada in Zambia, and her fans back home:

A few yrs ago I gave away too-big tennis shoes to a young #Kenyan player.

Guess who just made history as the first Kenyan to ever win at #Wimbeldon?

Even though you beat the team 😉😊 🎾https://t.co/RRrgDh2TT0

While speaking to a reporter moments after her win, Okutoyi spoke of how she paired up with Dutch tennis player Nijkamp as she expressed hope in seeing more Africans win the Grand Slam:

For the uninitiated, rallying is an exciting test of man and machine. Here, rally cars are driven at high speeds over short distances of rough terrain. Rallying routes can be both public and private roads to ensure safety for both drivers and fans. Currently rallying is governed by the Federation Internationale de l'Automobile (FIA), which sanctions the World Rally Championships across the globe. In June, the 2022 WRC brought rally drivers from around the world to Kenya for the Safari Rally competition.

In this world of motorsport, Maxine Wahome became the first woman to win the WRC 3 Category at the Safari Rally. Wahome is a motocross Kenyan champion who switched to motor rallying in 2022. The WRC3 classification is a support championship for less experienced drivers, where drivers race in less technical cars based on production models of established car manufacturers.

The Safari Rally is the sixth competition of the thirteen FIA World Rally Championships (WRC) circuit of rallies. It was started in 1953 and is deemed to be one of the toughest in the world due to the rough terrain and unpredictable weather.

Maxine Wahome led a clean Kenyan sweep of Jeremy Wahome (her brother who is also a racer), who came in second, and McRae Kimathi in third in the same category. Her win was made more impressive because she was driving a Ford Fiesta Rally3 — her first time doing so in a professional competition.

With just over 18 months of rallying experience, she has made great leaps and strides in learning and adapting to the fast and technical aspects of modern-day rallying. Wahome, who comes from a rallying background through her father, was initially a motocross enthusiast riding in the two-wheel sport for 11 years. She was so proficient that she won Girl of the Year Rider three different times.

Her achievement won her plaudits from Formula 1’s Lewis Hamilton:

Her team also sent words of encouragement and achievements:

When she isn't racing, Maxine works as a part-time teacher. She hopes she can encourage local women to experiment with racing. Her sponsors awarded her with a USD 8,480 cheque (approximately KSH 1,000,000) for her Safari Rally achievements.

She also won accolades from the Driven by Diversity program, a non-profit organization with a global alliance of experts formed to address the lack of diversity in the motorsport industry.

For a country known for more conventional sports such as running and football, Angela and Maxine's wins are breaking down barriers. With these successes, the Kenyan government may consider investing in other sports to promote wider athletic participation and allow other individuals to excel, too. As Okutoyi put it, she looks to inspire the young and next generation of sports talent in the country.