A Bosnian perspective on the US fight for reproductive rights

An estimated 2,000–4,000 children were born of rape during the Bosnian War 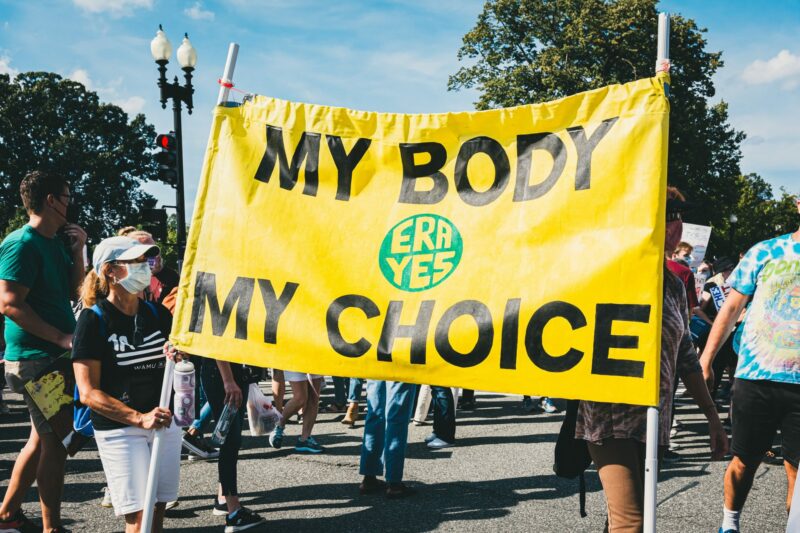 This article by Mia Baxley was originally published on Balkan Diskurs, a project of the Post-Conflict Research Center (PCRC). An edited version has been republished by Global Voices under a content-sharing agreement.

The preservation of reproductive rights is one of the greatest challenges to personal rights in 2022. Activists in both the developed and developing worlds share the common fear of roll-back on previously established legal rights.

A new report report by the United Nations Population Fund (UNFPA) indicates that at least half of all pregnancies every year across the world are unintended, resulting from intimate sexual violence, wartime rape, and general lack of access to birth control and sexual education.

Оn June 24, the United States Supreme Court overturned Roe v. Wade, a landmark 1973 decision that legalized abortion across all 50 states. It guaranteed protections for women’s reproductive health, voiding nearly every major state-level abortion ban. According to the Guttmacher Institute, at least 21 US states have laws or constitutional amendments already in place to enable quick abortion bans, while four more are likely to ban abortions in the near future.

Since 1973, the issue of abortion in the United States has become a sociopolitical competition between pro-choice activists fighting to preserve access to abortion on demand, claiming to represent 80 percent of voting-age Americans who support pro-choice policies, and pro-life activists seeking to de-legalize abortion at the federal level.

Bosnia and Herzegovina (BiH) is no stranger to the fight for reproductive rights, paired with issues stemming from its decentralized state organization.  The country’s very recent history of forced pregnancy in the context of genocidal rape has set this small Balkan nation on a similar track to protect the right to choose one’s own reproductive destiny.

During the Bosnian War in the early 1990s, the combatant Army of Republika Srpska (VRS) adopted a policy of genocidal rape and forced pregnancy to “plant the seeds” of ethnic Serbs in Bosnia and weaken the ethnic Bosniak bloodline. In response to this crime, the 1998 Rome Statute of the International Criminal Court formally recognized genocidal rape and forced pregnancy during conflict as a crime against humanity. 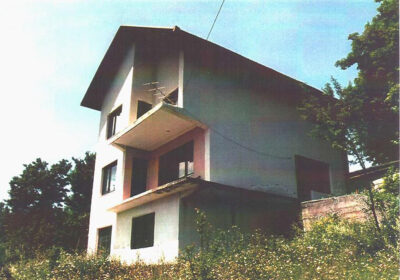 “Karaman's House,” a location where women were tortured and raped near Foča, in Eastern Bosnia (1992-1994). Photograph provided courtesy of the ICTY, republished via Wikipedia.

For female survivors of wartime rape in Bosnia, the act was used almost exclusively for the end goal of producing a pregnancy against the victim’s will. Because of the VRS’s genocide policy, an estimated 20,000 to 50,000 women were raped by VRS soldiers, with many reporting being raped multiple times a day. Rapes occurred in colloquially-named “rape camps” and other detention centers around the country, but they also occasionally occurred inside the woman's own home.

The children born out of these forced pregnancies were also victims of the societal perception as tainted from birth. With many of them now well into adulthood, the estimated 2,000–4,000 children born from rape during the war were often referred to as “forgotten children,” “invisible children,” and or the derogatory label “Chetnik” (a term applied to Serbian ultranationalists or paramilitaries). Without singular ethnic identity in a divided country, many such kids either grew up without a place in Bosnian society, or were adopted by couples overseas. Some of them have decided to return in recent years to develop a stronger understanding of the circumstances of their birth.

Women’s rights and abortion in Bosnia

Even though the Balkans is considered highly conservative area, abortions are legal across the region up until the tenth or twelfth week of pregnancy, owing in part to pre-existing laws from the former Yugoslavia which permitted the procedure.

Article 191 of the Federal Constitution of Yugoslavia, enacted in 1974, stated that, “it is a human right to decide on the birth of children,” thereby enshrining abortion access as a fundamental human right. The open availability of abortion in Yugoslavia meant that nearly 100 percent of abortions in the federation occurred in medical facilities and death rates for patients were nearly nonexistent.

With the breakup of Yugoslavia in 1991, the newly emergent republics were left to determine their own abortion laws, with some (like Croatia and Macedonia) choosing to rework and update their previously existing rules.

We remind about the secular state. We don't want to go back to illegal abortions. A protest in front of Constitutional Court [in Zagreb, Croatia].

In Bosnia, the country’s federal makeup as two entities complicates the legal definition of abortion, among many other laws that are unevenly enforced and distributed across the nation. It consists of two federal entities, the Federation of Bosnia and Herzegovina and Republika Srpska (i.e. Serbian Republic), possessing legislative powers similar to US states.

In Republika Srpska, abortion is allowed up to the tenth week of pregnancy, but primarily in cases of rape, fetal impairment, incest, and risk to the health and life of the mother. In the governmental Strategy for Improving Sexual and Reproductive Health in the Republika Srpska (2019-2029), abortion was deemed “a significant social, medical and public health problem […] also an economic problem due to increased costs for the treatment of immediate, early and late complications and infertility.” This document also alarms about the use of abortion as a regular method of birth control, aiming to reduce its incidence.

Because of BiH's heavy decentralization, activists report that access to abortion is uneven for women across the two entities. It is not uncommon for some hospitals to refuse to perform the procedure for elective reasons, and for others to lack proper equipment or expertise to perform it. The human rights organization Sarajevo Open Center also raised concern over the rising cost of legal abortions, and an increase of underground clinics offering cheaper services for poor and rural women. 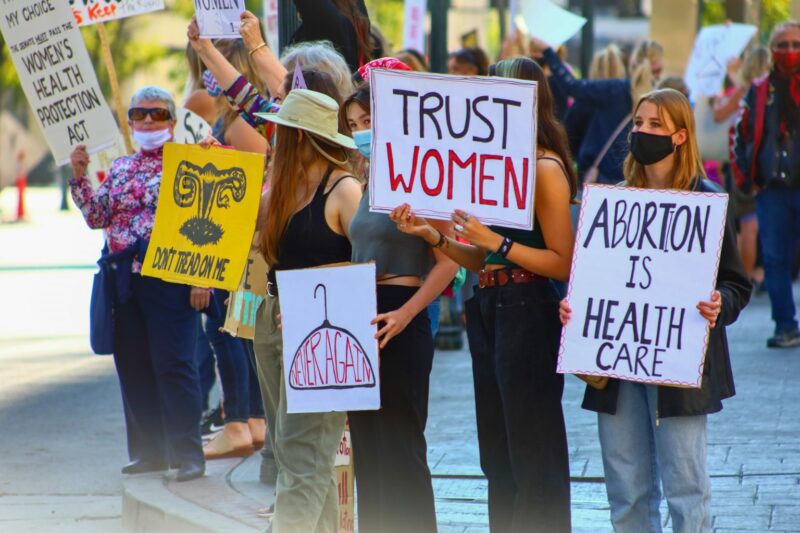 Today, many non-governmental organizations are fighting for women’s rights: protest in Reno, Nevada, US in October 2021. Photo by Manny Becerra, unsplash.com, published under Unsplash License.

Several non-governmental organizations fight for women’s rights and reproductive freedom in BiH, adapting to changing circumstances. One of the first Bosnian reproductive health centers, Medica Zenica, was founded in 1993 to provide access to gynecological services for survivors of wartime rape. It now mainly responds to intimate partner violence and human trafficking.

Bosnian women also benefit from the work of  international reproductive healthcare organizations, like the UNFPA, which came to the country in 1995. Since 2019, it has helped develop reproductive health resources for young Bosnians in at-risk rural communities. In the capital Sarajevo, it spearheaded a novel vaccination program to protect young Bosnian women from Human Papillomavirus (HPV), preventing endemic cervical cancer.

Abortion rates in Bosnia are high due to the lack of access to sexual health education. National age-appropriate sexual education curriculum is lacking despite Bosnia’s ratification of the Convention on the Rights of the Child in 1993.

Republika Srpska’s 2019 strategy specifically called for raising awareness of modern family planning methods as a means to reduce the current abortion rate. UNFPA Bosnia has also been working with local NGOs in both Sarajevo and Banja Luka, the capital of Republika Srpska, to create a nationwide out-of-school comprehensive sex education program that would close the educational gap in rural areas.

As a consequence of inadequate sex education, the US has the highest teen pregnancy rate of any developed nation, and these consequences are more evident in states where students are not given proper knowledge on their sexual health. The sexual education curricula of 37 US states require lessons on abstinence (totally refraining from sex), while medically accurate information on contraception is only mandated in 18 states.

On the issue of abortion, the US and Bosnia share a number of similarities. Because of heavy decentralization, both countries struggle to uniformly apply reproductive rights and education to all citizens. However, many Bosnian women are intimately aware of a time when their reproductive rights were taken from them by force, and pro-choice activists had successfully stood up to attempts to curtail them during the last two decades. It remains to be seen how Roe’s reversal will affect women and future generations born from this decision across the world.