Over 10,000 protestors were arrested 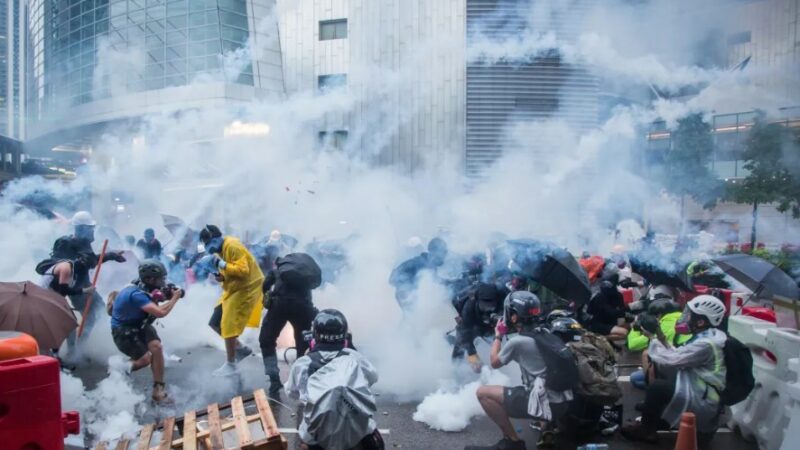 Demonstrators clash with police at a protest in 2019. Photo: Jimmy Lam/USP & HKFP.

The following post was originally written by Lea Mok in the Hong Kong Free Press (HKFP) on July 16, 2022. It is published on Global Voices under a content partnership agreement with HKFP.

Three years after months of mass protests and unrest rocked the city of Hong Kong in 2019 and 2020, city officials insist they have restored stability and predict a bright future for its people.

Over a million people took to the street in 2019 to protest against China-imposed extradition legislation. The protests quickly turned violent amid police crackdowns. The aftereffects of the pro-democracy unrest, including a Beijing-imposed national security law (NSL) and sweeping electoral changes, have permanently reshaped the city.

As of May 31, more than 10,000 people had been arrested for protest-related offenses, with 2,866, roughly 28 percent, having been prosecuted so far, according to police.

For the 72 percent who have not been prosecuted, HKFP emailed the police to clarify what happened to them and why they have not been charged. The police authority replied without addressing the question of whether they would prosecute more arrestees:

In 2019 and 2020, Hong Kong experienced unprecedented unrest… involving a large number of criminal activities, some serious and complicated cases, and a huge amount of evidence, making the investigation difficult…

Nearly one-third of those prosecuted are still undergoing legal proceedings. One of the defendants in a riot case told HKFP he had forgotten most of the details of his alleged offense because of the long wait. He had also finished his two-year associate degree while waiting for justice. He said:

My lawyer told me to jot down what happened that day, so that I won’t forget all the details. He was right.

Of the 2,866 people prosecuted thus far, the cases of 1,908 defendants have been completed. Of these completed cases, a vast majority — 79 percent of the defendants — faced legal consequences. Charges against three percent were withdrawn, and 18 percent were acquitted following a trial. 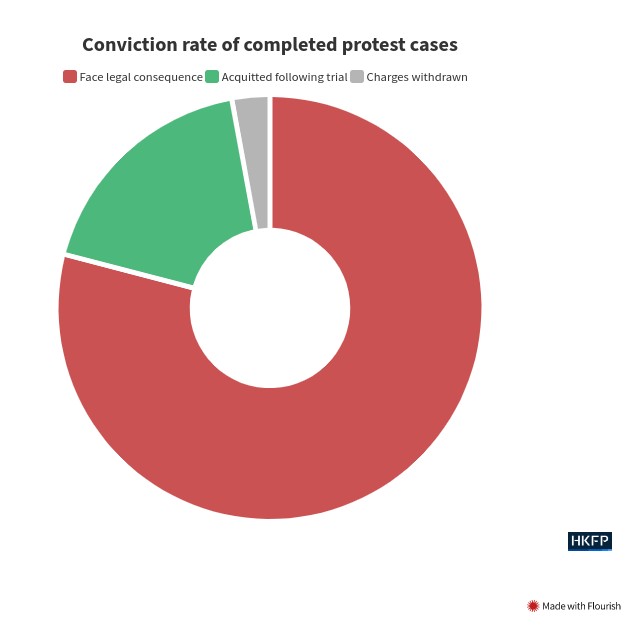 According to a database compiled by independent court media outlet The Witness, 839 defendants were charged with taking part in the riots. 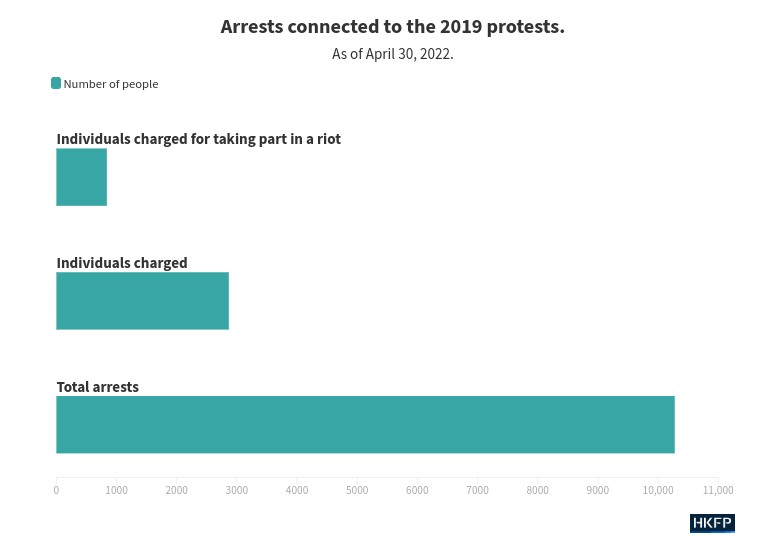 Of the 10,278 arrestees, 4,010 were students, and over a thousand were prosecuted. Around 350 of them were charged with taking part in the riots, four out of every ten of all of those so charged.

According to The Witness, the prison terms of the 149 protesters convicted so far of rioting ranged from two to six years, with an average of 3.6 years. 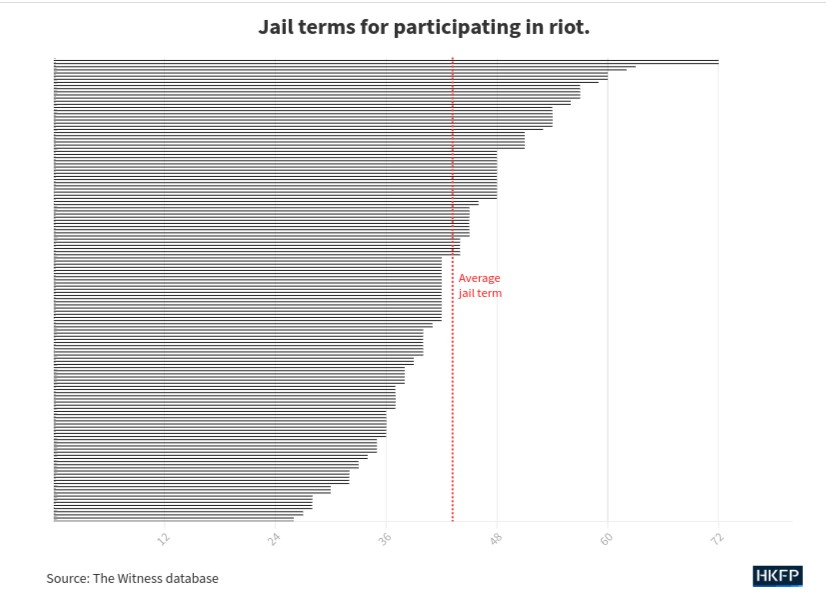 Asked about the chance of pardons for protesters, especially the youth, the then-chief executive hopeful John Lee said on April 29, 2022:

Hong Kong is a place where the rule of law prevails, and everyone must abide by the law…if one does not abide, Hong Kong will become a society where the weak are prey to the strong, and civilians will be bullied. We may sympathise with [protesters], but if we do not build up the law-abiding awareness, everyone will suffer in the end…

Lee is now the chief executive of Hong Kong.

With only 2,866 people prosecuted so far, and some cases suspended due to COVID-19, courts are struggling to handle the caseload.

The average waiting time for defendants in district courts — from their first appearance to the start of their trial — was 118 days in 2016, rising to 287 days in 2021, according to the judiciary’s annual report. 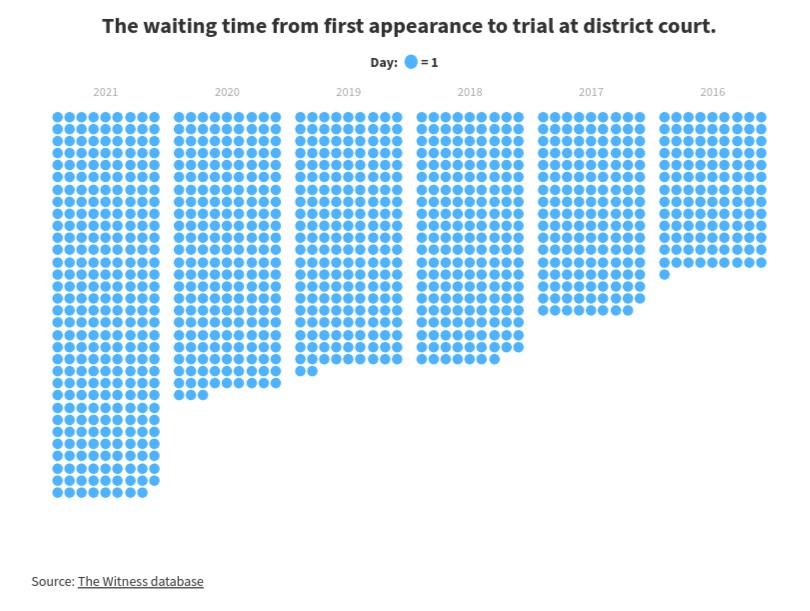 The justice department’s stated goal is that defendants should have to wait no more than 100 days for a hearing in district court. 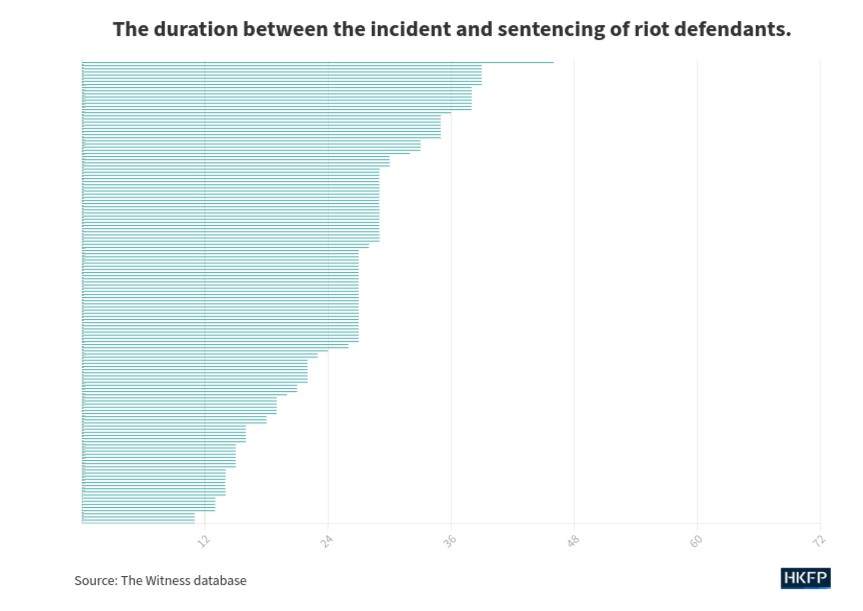 Some accused have fled the city and secured asylum in other countries. Others, including a boatload of 12 Hongkongers bound for Taiwan and a teen protester who was shot by the police, have been caught during or before alleged escape attempts.

A city without protest

Apart from overworked courts and scores of young people behind bars, the crackdown following the events of 2019 has effectively ended all mass protests in the city.

Police and officials who in recent years have banned traditional big protests, including the July 1st pro-democracy march and the June 4 vigil on the 1989 Tiananmen crackdown, invoked a ban on mass gatherings, citing COVID-19 concerns. The national security law enacted in June 2020, which outlaws secession, subversion, terrorism, and collusion with foreign powers in vague terms, also chilled the climate for dissent.

The total number of public processions decreased from 1,930 in 2012 to 76 last year, according to police figures. Police refused to say which 76 processions were approved or how they differed from other political gatherings. 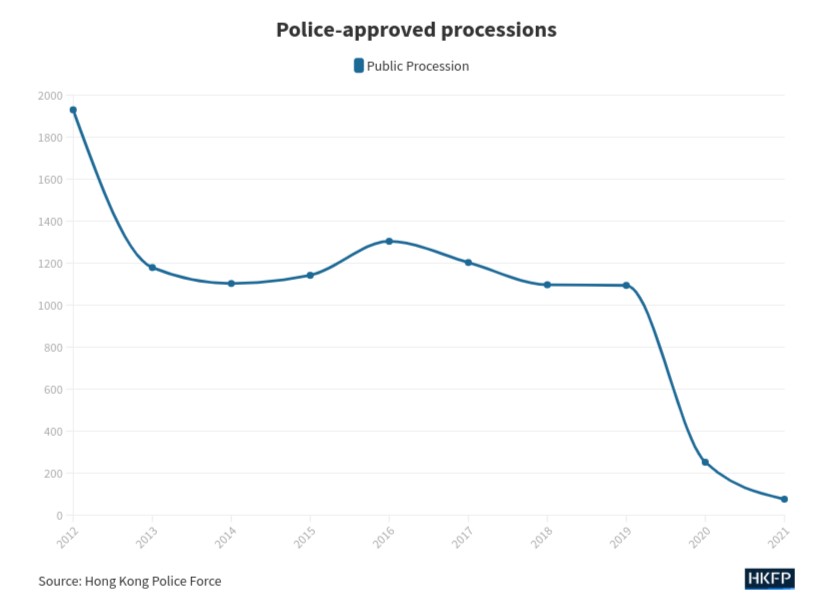 Hongkongers have always had to file applications with police to hold public protests. No public meetings or processions were outlawed in 2018, but in 2019, 47 applications were rejected. 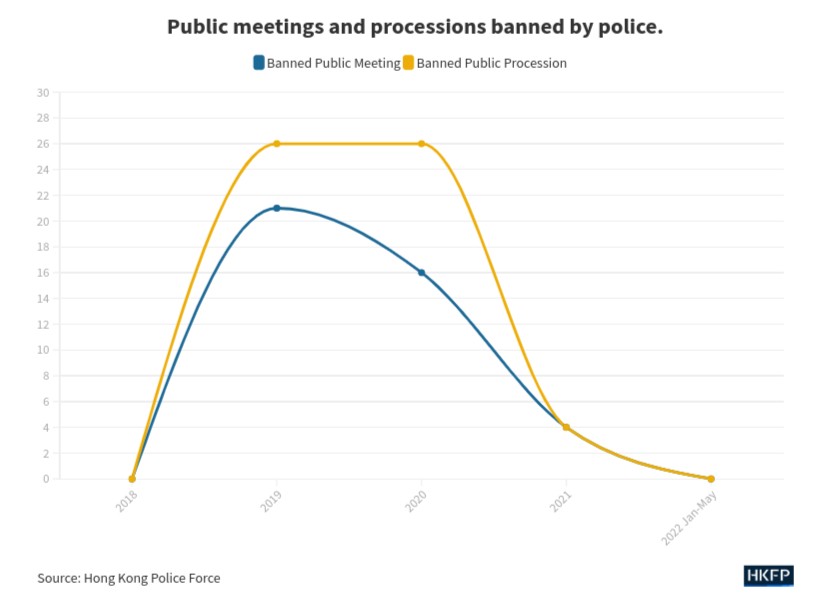 No demonstrations have been banned this year because no one applied to hold one, according to police. Most opposition leaders are behind bars, have gone into exile abroad, or have quit politics.

But some four years after the historic 2019 protests, authorities insist Hong Kong has a promising future with the security law guaranteeing stability.