The history of Turkey's unpopular hydroelectricity projects in Southeastern Anatolia

The Southeasternanatolia Development Project has prioritized economic development over history 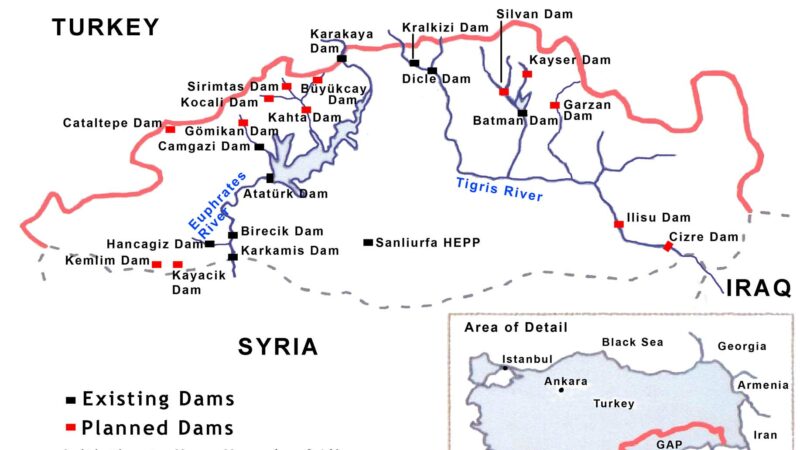 Map of the GAP hydroelectricity projects created by the Initiative to Keep Hasankeyf Alive. Creative Commons.

The following story is part of series on Turkey's Ilisu Dam project and the flooding of Hasankeyf.

In 1931, Mustafa Kemal Atatürk, the founder of the Turkish republic visited Diyarbakır, the largest Kurdish-majority city in Southeastern Anatolia. Noting the region’s difference in the quality of life compared to Western Turkey, he proclaimed his goal to “see factories, irrigated farming, roads, electrified villages, houses with healthy dwellers, and evergreen forests” as soon as possible, because “the civilization and life in İstanbul must be brought [t]here too.” 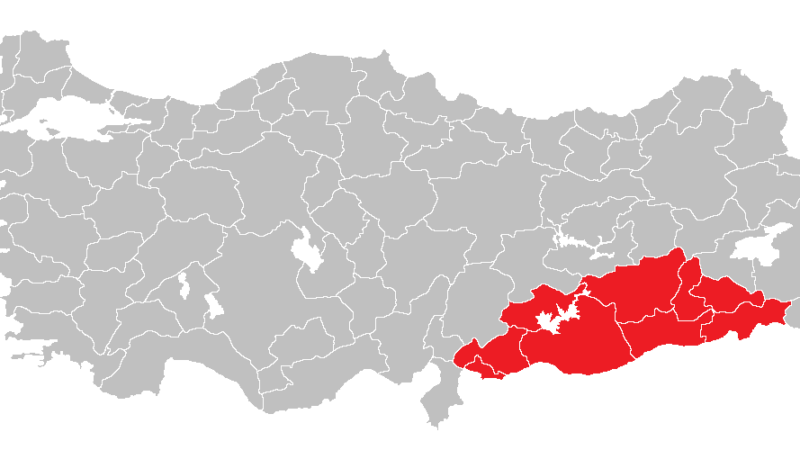 Forty years later, this vision was realized with the Güneydoğu Anadolu Projesi (Southeasternanatolian Development Project or GAP for short in Turkish). Designed on the administrative structure of the Tennessee Valley Authority (TVA) in the United States, GAP intended to harness the powers of the region’s rivers to capture energy, irrigate fields, and animate investment. As of 2017, 74 percent of the energy projects and 26 percent of the irrigation projects within the GAP purview have been completed. But the economic benefits, as well as the project’s cultural and environmental impact on the region, remain unclear.

The Southeasternanatolian Development Project (GAP) was first outlined by Turkey’s Ministry of Industry and Technology in the 1970s. It included the construction of 22 dams and 19 hydroelectric power plants that would annually produce 27 billion kWh of hydroelectric energy and irrigate 1.7 million hectares of land. In the 1980s and 1990s, the scope of the project expanded to cover education, transportation, industry, and the reduction of inequality.

The United States has had an outbound impact on the vision and implementation of GAP. The project’s utopian intentions of “placing another great civilization on top of all past civilizations in Anatolia,” were driven primarily by River Basin Planning methods. This meant focusing on developing an entire river’s ecosystem and based on the accounting cost-benefit analysis. It was intended to resolve decisions of competing demands for water resources by centralized administration and was imported from and first developed by the Tennessee Valley Authority (TVA). In a 2014 interview, a member of parliament from Istanbul noted that the TVA model was “the greatest example ever in this scale” that “transform[ed] a large geography from a desert into a paradise not just physically, but with educational institutions, cultural establishments, and new cities.”

Throughout the 1950s, the United States Bureau of Reclamation, the agency responsible for major public infrastructural works, trained Turkish engineers in the methods of American infrastructure development. Süleyman Demirel, one of the founding fathers of GAP and Turkey’s president from 1993–2000, attributed much of his motivation for the development project to a two-year program with the American Bureau of Reclamation in the 1940s. In his reflections, Demirel wrote, “I am the first Turkish engineer who was sent to western states in the US by the government to enhance my knowledge and skills in 1949. There, I saw a lot and had the opportunity to apply them in my country. When I saw the [Hoover] Dam on the Colorado River in Nevada. . . I sat on a rock and watched it for three days.”

But America’s own hydrology projects were not without criticism. The Hoover Dam that Demirel observed in 1949 is facing the worst drought in 12 centuries, threatening to leave more than 40 million people without drinking water or electricity. Infrastructure projects along the Colorado River, which is the most regulated stretch of water in the world, have been widely responsible for “the most tragic of environmental losses” in the world.

GAP covers 9 provinces — Adıyaman, Batman, Diyarbakır, Gaziantep, Kilis, Mardin, Siirt, Şanlıurfa, and Şırnak — located in the Euphrates-Tigris Basin and upper Mesopotamia plains, and makes up 20 percent of the nation’s irrigable land and 33 percent of all the country’s energy potential.

At the time, the justifications for the development project primarily focused on revived historical legacy, economic opportunity, and social integration. In the early years, the project architects often praised the region’s history as “home to the invention of the city, writing, the wheel, animal domestication, agriculture, irrigation, and similar groundbreaking developments in history.” In 1989, Ali İhsan Bağış wrote in an article titled “Southeastern Anatolia Project: The Cradle of Civilization Regenerated,” that the regional development will bring a “rebirth of the prosperity which Mesopotamia enjoyed thousands of years ago, accompanied by modern technology.”

In 1993, the-then Prime Minister Süleyman Demirel said that the GAP infrastructure was needed to “activate the resources of a country and canalize them to the welfare of population… Nothing comes out of dormancy. Resources have always existed. The important thing is to pair them with knowledge, science, and technology as the products of human intellect.” 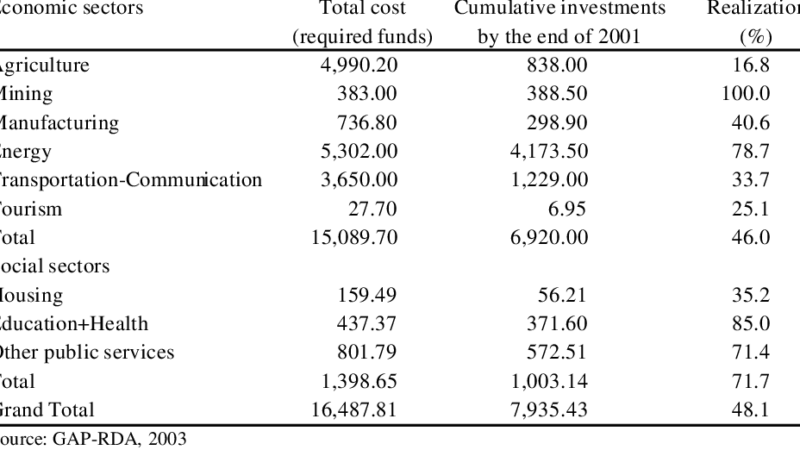 GAP project cost and cash realizations by sectors at the end of the year 2001 (million dollars at 2002 prices). Creative Commons.

The cause of the “dormancy” was placed squarely on the residents in the region. Their lifestyles were described as backward and ignorant. GAP social action plan published in 1999, noted that “traditional social and cultural structure” that included “semi-feudal structure in agriculture, traditional ways in animal husbandry and semi or even full nomadism” dominated across the area. The dependence of local people on an intricate system of ancient institutions such as tribes, sheiks, and landlords in relation to production and social organization were described as barriers to social development. In addition to these local nuances, the authors of the report also admitted there was a lack of comprehensive engagement or consultation with the local population. Instead of community engagement, the GAP planners in Istanbul emphasized the need for technocratic and top-down methods of economic development to bring the region out of its perceived “backwardness.”

In 2011, Turkey’s Minister of Development Cevdet Yılmaz affirmed the utopian vision, “we march towards a GAP where we use our potential at a maximum level, where we build richer and better cities, where we have a more diverse and colourful environment with universities, civil society, the media, and activities of culture and arts, and where our people, specifically our youth and women, participate much more in social and economic life.”

But such an approach was costly and opposition to the GAP project was imminent. In 2014, a Kurdish MP from Muş claimed that the Turkish government “aimed at rendering the region uninhabitable through a policy of building large dams and HPPs (Hydroelectric Power Plants) and of killing plant and animal diversity [in the GAP region].” Another MP from Şanlıurfa stated, “the state destroyed the whole thing, the history of [Hasankeyf] just to produce a few more kilowatts of electricity, [but] losses outweighed the gains from electricity generation.”

The planners of the project deplored such criticisms. An engineer for the State’s Hydroelectric Works bemoaned activists for being “against everything” and that sacrifices had to be made. Another GAP engineer, in response to international criticisms of the project, noted in 2014, that “whenever Turkey pursued policies that served the interests of the West, the West generously provided credit. But when Turkey does not, the West starts crying about how dams destroy the culture, the environment.”

Others like a former coordinator of GAP admitted to the inevitable damages of development, accepting that infrastructure construction was “painful” and “could have disproportionate impacts on each group [in society].” While the coordinator acknowledged lost properties, lands, and graveyards during submerges these losses were inevitable in the face of the development project. And that these losses were not specific to Turkey only, the civil servant continued “every development project has similar impacts . . .Since the goal is to increase [people’s] quality of life, it is quite normal to lose a generation in similar development projects.”